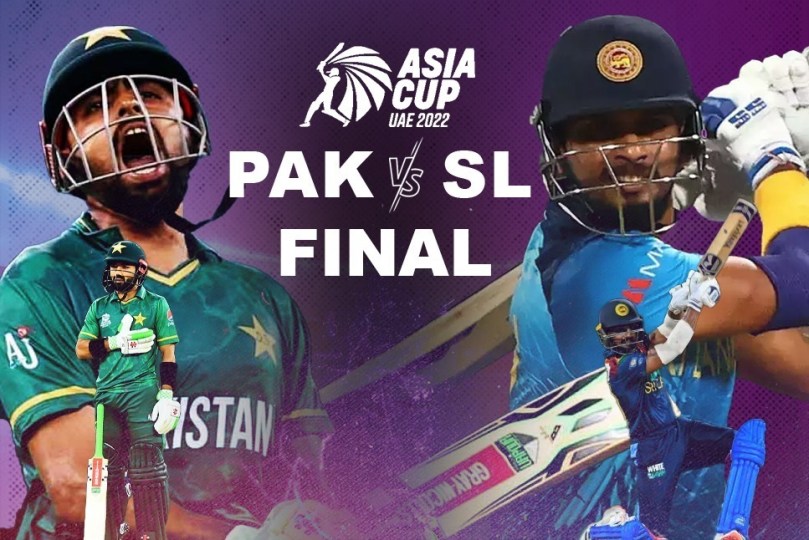 PAK vs SL LIVE Score – Asia Cup Final LIVE: Coming off a socio-economic crisis, SriLanka Cricket is on cusp of REBIRTH. Dasun Shanaka’s team has already brought smiles on the faces of SriLankan fans. Now as they meet Pakistan in finals of Asia Cup 2022, they can further enhance the reputation of SriLanka Cricket. On the other hand Babar Azam led Pakistan will attempt to win their first BIG TROPHY since ICC Champions Trophy. The final will be played on Sunday at 7:30PM and will be broadcasted LIVE on Star Sports Network: Follow Pakistan vs SriLanka Live & Asia Cup 2022 LIVE Updates with InsideSport.IN

Asia Cup Final LIVE: Technically, Sri Lanka are the hosts of this Asia Cup but due to a cruel twist of fate, the tournament had to be shifted to the UAE for security reasons.

It could have been infinitely sweeter had Dasun Shanaka and his men played the final at the iconic Khettarama Stadium (now Premadasa Stadium). Nevertheless, the kind of performance they have produced in the Super 4s would make anyone believe that it would be anything but easy for Babar Azam’s side.

Whether it’s the Asian Cricket Council or the general public of Dubai, everyone wanted an Indo-Pak final, but the gutsy cricketers from the island nation have earned their right to be in the summit clash.

And if that wasn’t enough, Friday’s easy win against their final opponents was the kind of warning that will keep Pakistan on their toes.

However, at Dubai, buoyed by a sizeable Pakistani population bursting its lungs out, the Mohammed Rizwans, Mohammed Nawazs and Naseem Shahs would like to lift their games on the big day, which has been a tradition.

But in Sri Lanka, they have an opposition that could be more than a handful and a team that has redeemed itself in a format where it had become world champions back in 2014.

The fortunes of Sri Lanka cricket nose-dived, just like the country’s eco-system, with poor selection and internal politics in the board not helping their cause.

The team that Shanaka led during their away series in India some six months back had more or less the same bunch of players, but what Sri Lanka had done successfully is change their T20 game plan, which is now filled with aggression.

Even without Dushmantha Chammera, the bowling attack has looked potent but there is one area where Rahul Dravid and the Indian team could take a note of is how effective Sri Lanka’s top five batters have been.

Two right-handed openers — Kusal Mendis and Pathum Nissanka — have been positivity personified at the top while likes of Danushka Gunathilaka, Bhanuka Rajapaksa, Shanaka himself and Chamikaatne Karunaratne have all made runs when they mattered the most.

A case in point is how they chased down a target of 70 odd against Afghanistan, where none of the batters scored more than 35, but all of them made those runs at a strike-rate of 150 plus.

In the five games so far, the Sri Lankan batters have hit 28 sixes and 62 fours, which gives a story of their approach.
In bowling, Mahesh Theekshana has come up as a potent spin bowling partner of Wanindu Hasaranga, while Dilshan Madhushanka has shouldered the responsibility of the lead pacer quite admirably.

In comparison, Pakistan have made it to the finals but Babar’s own form has deserted him throughout the tournament. 63 runs from five games isn’t something one expects from a player of his calibre.

The skipper would like to sing the redemption song in the match that matters the most.

Pakistan’s strength is their bowling attack that has Naseem Shah, showing improvement with each passing day, along with Harris Rauf and Mohammed Hasnain.

However, in Dubai, one has seen that toss has become an important factor as Pakistan aren’t good while batting first, and in the two games that they have lost in the tournament against India and Sri Lanka, they have batted first.

None of the top-order batters have a strike rate of 120 plus, especially those who have faced more than 50 balls in the
tournament. Therefore Pakistan’s best chance would be to win the toss and field first, as Rizwan is always in control when Pakistan are chasing.

Star Sports Network is the official broadcaster of Asia Cup 2022 in India. Disney+ Hotstar will present the live streaming.

PTV and Ten Sports are the official broadcasters of the match in Pakistan.

In Bangladesh, Gazi TV will telecast the match.

Ariana TV will present the live streaming of the match in Afghanistan.

Fox Sports will present the live action of the match in Australia.

Sky Sports will present the live action of the match in New Zealand.

In South Africa, the SuperSport network will present the live-action of the match.

Willow TV will present the live action of the match in the USA.

In the UK, Sky Sports will present the live streaming of the match.

In the Middle East

In Middle Eastern regions like UAE, OSN Sports Cricket will present the live telecast of the match.