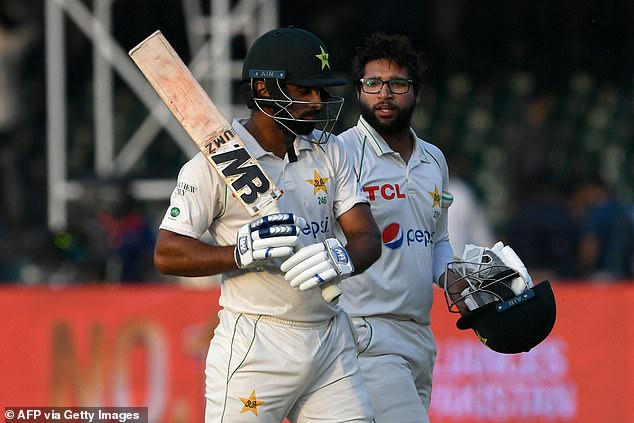 Pakistan started confidently Thursday in pursuit of a 351-run target in the series-deciding third Test against Australia, ending on 73 without loss at the close in Lahore.

Openers Imam-ul-Haq and Abdullah Shafique were unbeaten on 42 and 27 respectively, leaving the home team needing another 278 runs for victory in 90 overs, with all 10 wickets intact when play resumes Friday.

The first Test in Rawalpindi also ended in a draw.

Australia were unlucky not to have dismissed Shafique off the penultimate delivery of the day when slip Steve Smith had a touch of a Marnus Labuschagne delivery that instead found the boundary.

Shafique also survived umpire Ahsan Raza’s decision of caught behind off Lyon when on 13, as Australia’s efforts for an early wicket went in vain.

The highlight of Australia’s innings was an unbeaten 104 by in-form opener Usman Khawaja, and Smith becoming the fastest man to 8,000 Test runs. 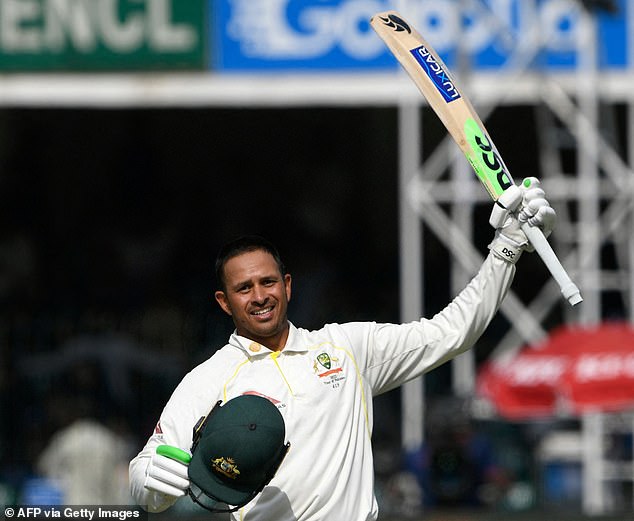 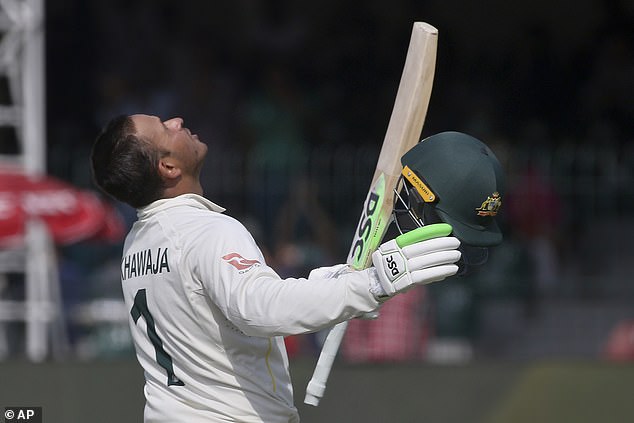 The Pakistan-born opener has piled up 496 runs in this series, just 17 short of Mark Taylor’s record 513 in 1998 – the highest against Pakistan in a three-match series

Pakistan-born Khawaja, who got a reprieve when Naseem Shah bowled him on 31 off a no-ball, scored 496 runs in the series, just 17 short of Mark Taylor’s record 513 in 1998 – the highest against Pakistan in a three-match series, and the last time Australia toured this country.

Smith also had a memorable day, driving pacer Hasan Ali to cover boundary to complete 8,000 runs in his 151st innings of his 85th Test.

In doing so he beat Sri Lankan great Kumar Sangakkara’s record of reaching the milestone in 152 Test innings, achieved against India in Colombo 12 years ago.

Khawaja, who scored 160 in the drawn second Test in Karachi, pushed spinner Nauman Ali for two to complete his 12th Test century before tea break. 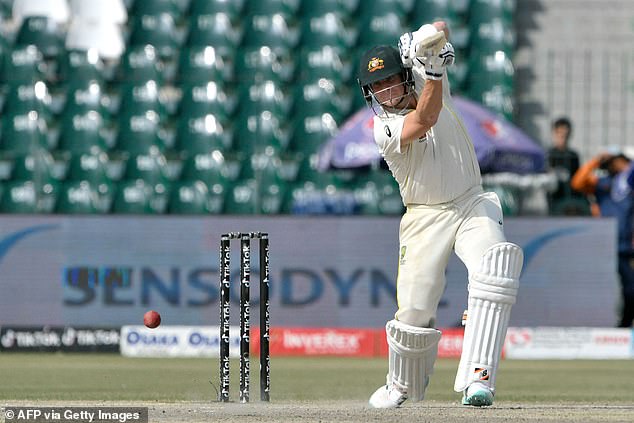 ‘It has been a really good series for me,’ he said.

‘Two hundreds and a couple of 90s, so it’s been fun and I have enjoyed it.’

‘I have the belief that you need to have more time to get them out,’ he said.

‘They played well, but we have 90 overs and they will need to push the run rate which is not going to be easy.’ 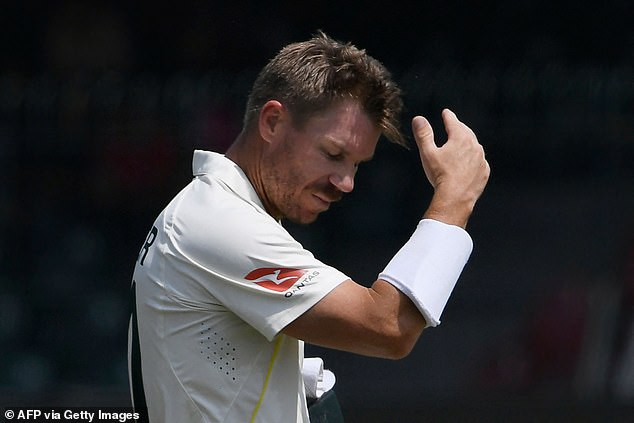 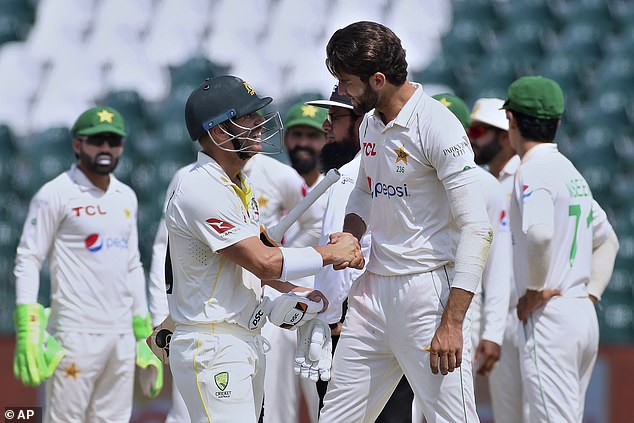 Australia added 112 runs in the two sessions for the loss of David Warner (51) and Labuschagne (36) as they looked for quick runs.

Khawaja put on 123 for the opening wicket with Warner and then another 65 with Labuschagne, who was dropped on 11 off Sajid Khan before holing out to Nauman.

Earlier, Australia scored quick runs as Warner opened with three boundaries in the second over of the day against pace spearhead Shaheen Shah Afridi.

He reached his 34th Test half-century in 123 minutes before left-armer Shaheen uprooted his off-stump on 51 with a quicker delivery that seamed away. 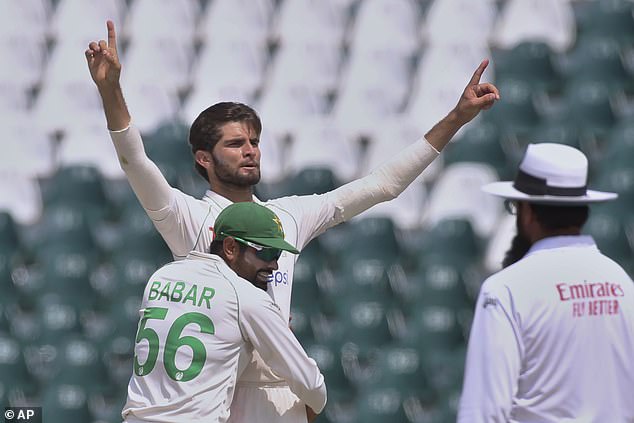 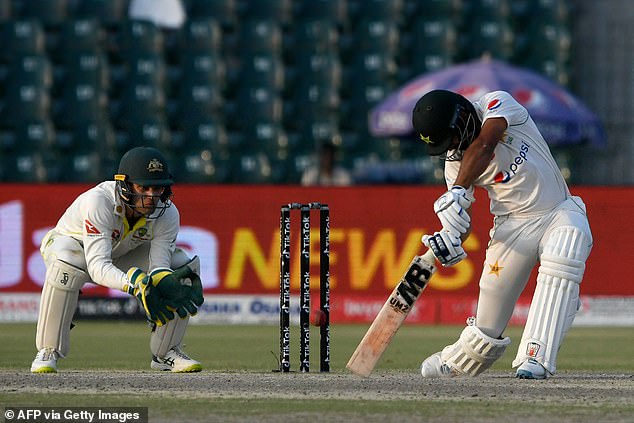 Warner’s knock included six fours and a six, but his stay at the wicket also saw some controversy.

Umpires Aleem Dar and Ahsan Raza suggested Warner, batting out of his crease, was encroaching onto an area of the pitch which could scuff and help spinners later in the match.

He removed his helmet and gloves before being involved in animated conversation with the umpires. Pakistan skipper Babar Azam also joined the discussion, pointing to the area that Warner was allegedly damaging.

Play resumed after a few minutes without any formal warning being given.

Australia are in Pakistan for the first time since 1998, having previously refused to tour over security fears.