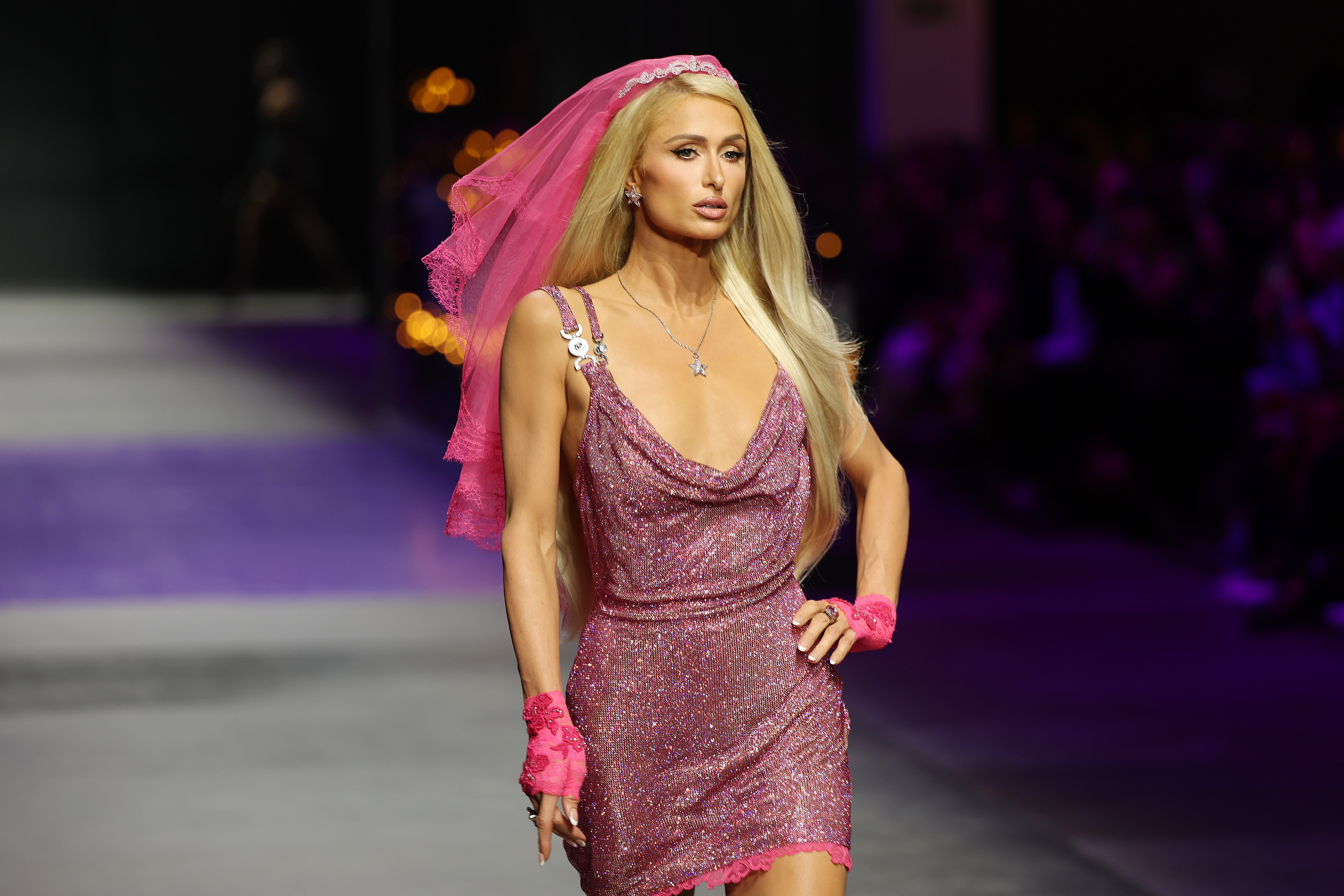 The “Simple Life” star posed for The Morelli Brothers’ lens for her cover shot, wearing a light pink Versace dress. The ensemble referenced both Barbie’s own all-pink wardrobe — a top trend today, dubbed “Barbiecore” — as well as her viral Versace bridal ensemble at the brand’s spring 2023 fashion show. The sleek number featured a low neckline, corset boning and a single gold Medusa medallion accent on its strap. Completing Hilton’s ensemble were sparkling Swarovski crystal bracelets and a collar necklace.

Elsewhere in the editorial, the “Stars Are Blind” singer posed in an array of statement-making outfits. In one photo, she wore a sparkly black cutout Andreādamo jumpsuit with crystal-covered Aquazzura pumps next to a mock Eiffel Tower. Another photo found Hilton in a slick black Roberto Cavalli gown with bondage harness-like straps across its open bodice, paired with black pointed-toe Christian Louboutin pumps.

Still, in other images, Hilton embodied the Y2K glamour she made ubiquitous with the early 2000’s era. One photo found her in a silky ruched black halter-neck dress with stacked silver bangles on each arm, paired with white Aquazzura cutout pumps. Another saw her lounging against a silky bedsheet in a pink velvet keyhole-cutout dress topped with a flower; a similar backdrop was also used to show her striking a pose in a white cutout bodysuit, fluffy faux fur coat and gleaming metallic heels.

The “Paris in Love” star’s shoe wardrobe is wide-ranging. Hilton has worn a variety of pumps and sneakers by Steve Madden, Jimmy Choo and Giuseppe Zanotti over the years, frequently accented with maximalist crystals or mixed materials. Her footwear rotation also includes Alaia boots, Rothy’s flats and K-Swiss sneakers.

Hilton continues to build an empire with 19 product lines, including shoes, clothes, handbags, jewelry, lingerie, dog clothes and makeup, as well as media projects. “I’m about to release my 29th fragrance,” she told FN in an August cover story, listing off her current commitments. “I’m investing in a lot of tech products and VR and NFT and writing my third book and doing my second album. And I have my podcasting company, my deal with Warner Brothers, my own production company deal, and my new show.”

Click through the gallery to see Hilton’s glamorous style evolution over the years.