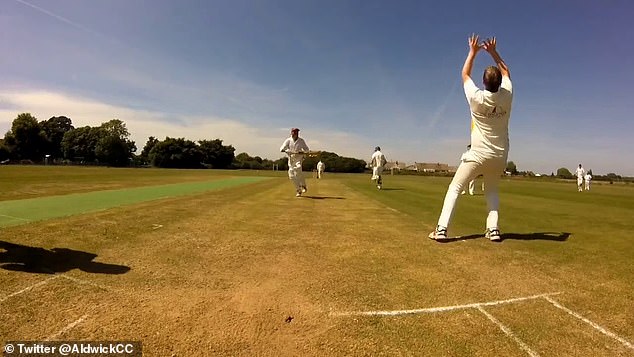 This effort from the 16-year-old might actually be better, because he took the catch off his own bowling.

Taylor is famous for his brilliant take against the West Indies in 1996 off the bowling of Michael Bevan.

It should have been a spectacular drop, as the ball speared off his hand and even his hat, before Taylor famously kicked the ball back up into the air and claimed the catch.

‘Can you believe that? That is brilliant,’ legendary commentator Richie Benaud said.

‘He didn’t panic in the slightest, he just flicked it back with his toe.’

‘Have a look at this. Whoops, dropped, that’s the end of that, then whack, kick it back in the air and thank you very much,’ the late Tony Greig also said in commentary.

‘I tell you what, he enjoyed that. I suppose there is an element of luck associated with the fact that he managed to kick it straight up in the air. 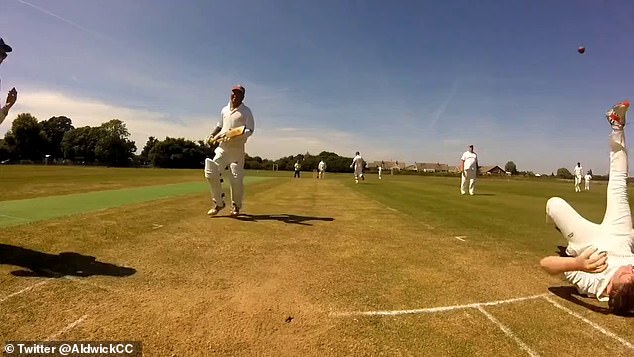 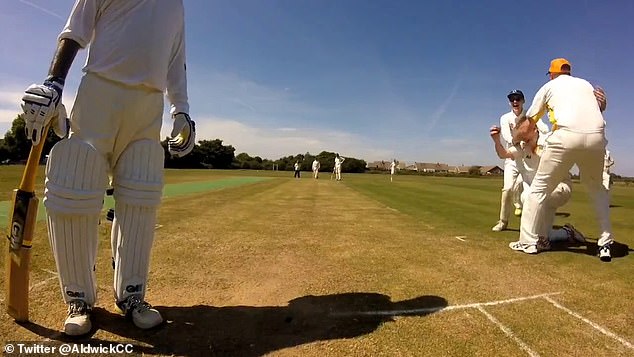 A village cricketer took an outrageous catch, emulating Mark Taylor by kicking it in the air

‘But the truth of the matter was he had his eye on the ball the whole time and when it came down onto his leg he did have a little flick at it, to kick it up.’

Ryder, 16, was trying to catch a skied ball off his own bowling when it bounced out of his hands and he fell to the ground. Fortunately, the ball bounced off his foot and he was able to scramble back up to claim the catch.

There have been other instances of Aussie Test cricketers juggling the ball before securing a catch, with David Boon one of the first to make the tactic famous.

Playing against India at the SCG, Boon managed to swat a sharp chance off Mohammed Azharuddin up in the air with his left hand before claiming the catch with both mitts.

More recently, Marnus Labuschagne pulled off an excellent juggling act in the second Test against Pakistan at Abu Dhabi to claim Mohammad Hafeez – by catching the ball between his legs.

‘It hit him in the inner thigh, dropped onto his right knee as he folded down, it bobbled into the calf, he scooped it up with his right hand and it stopped between his legs as he rolled onto his back! What a catch,’ ESPN online commentary read.

Bowler Nathan Lyon joked that Labuschagne would claim he had trained for that moment.