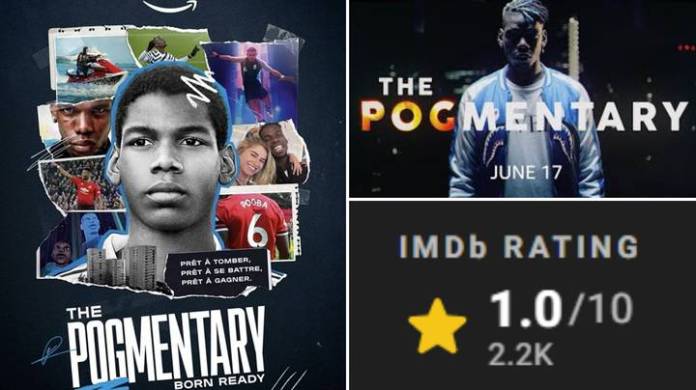 The Pogmentary: Paul Pogba’s documentary receives a 1.1/10 IMDB rating – Paul Pogba’s new Amazon Prime documentary ‘The Pogmentary’ has the lowest rating of any TV show or film on the International Movie Database, with a score of just 1.1 out of 10. The series examines Pogba’s time at Manchester United and his reasons for leaving the club, but has received backlash for the midfielder’s apparent arrogance. Follow all Football news and updates live on Insidesport.IN

Paul Pogba’s ‘The Pogmentary’ has a rating of 1 out of 10 and is the worst-rated show on IMDb… 😬 pic.twitter.com/wHtHpWhZK7

One scene shows Pogba dismissing a contract offer in excess of £300,000 a week as ‘nothing.’

‘They’re bluffing. How can you tell a player you absolutely want him and offer him nothing? Never seen that,’ Pogba tells his late agent Mino Raiola when he hears of the offer.

The Pogmentary: Paul Pogba’s movie is rated the worst by audience

Another clip shows Raiola recalling his infamous spat with Sir Alex Ferguson that resulted in Pogba leaving United for the first time in 2012. The agent told Ferguson his ‘chihuahua would not walk on the grass off the training centre’ for the money the midfielder was being offered.

And fans are clearly unimpressed with the fly-on-the-wall show after the score from IMDB – which provides information about TV shows and movies and allows fans to leave reviews – reveealed a feeble 1.1/10 rating – the lowest on the website.

There have been 197 reviews left for the series, with some viewers describing Pogba as ‘deluded’, ‘self-obssesed’ and ‘childish’ after watching the show. Most fans left a scathing 1/10 score.