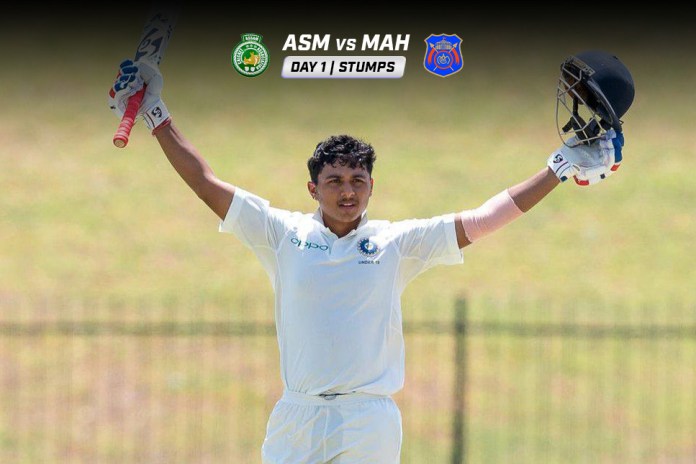 ASM vs MAH Day 1 Stumps: Opener Pawan Shah slammed a sublime 165 on debut to guide Maharashtra to 278 for five on the first day of their Elite Ranji Trophy group
G game against Assam here on Thursday. Follow ASM vs MAH updates on Insidesport.IN

The 22-year-old Shah, who hails from Chinchwad and is a product of the Varroc Vengsarkar Cricket Academy, was the cynosure of all eyes at the Chaudhry Bansi Lal Stadium as he took on a pedestrian Assam attack with gusto.

The right-handed batter hammered 15 boundaries and one maximum in his 275-ball unbeaten knock.

Put into bat, Maharashtra lost opener Yash Nahar (4) and Rahul Tripathi (2) to find themselves in a spot of bother at 32/2. But Shah found an able ally in Ankit Bawne (27) and the two rallied the innings with their 66-run stand for the third wicket. After
Bawne became right-arm pacer Mukhtar Hussain’s second victim, it was Shah, who held the innings together.

Meanwhile, Shah was joined in the middle by seasoned campaigner Naushad Shaikh but after reaching 28, the latter got out.

However, Shah kept on playing his shots at will, frustrating the opposition attack while proving his mettle at the big stage.

Maharashtra lost Shaikh and wicketkeeper Vishant More (16) in quick succession, but Diyyang Hinganekar (36 not out) played the perfect second fiddle to Shah, the duo adding 94 runs for the sixth wicket to prop up their team.