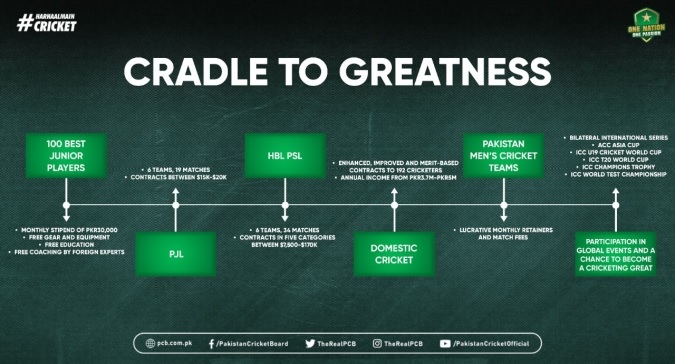 PSL League for Juniors: Lahore to host PJL from Oct 1 The inaugural edition of the Pakistan Cricket Board’s (PCB) Pakistan Junior League (PJL) tournament will take place in Lahore from October 1-15 at Gaddafi Stadium. The players will be picked via a draft system and iconic players will serve as team mentors or coaches for each franchise. Follow all the latest updates on InsideSport.IN

PSL League for Juniors: PCB’s Pakistan Junior League to be hosted in Lahore from Oct 1-15; all you need to know

The cricket board and its strategic partners have agreed to provide 100 best teenagers with monthly stipends of PKR30,000 each, scholarship at a premier educational institution, free cricket gear and equipment, and high performance coaching at the state-of-the-art National High-Performance Centre from the leading and highly-qualified international coaches.

PSL League for Juniors: PCB’s Pakistan Junior League to be hosted in Lahore from Oct 1-15; all you need to know

PCB Chairman Ramiz Raja said: “I am delighted, encouraged and motivated by the response we have received as the Pakistan Junior League’s Request for Expressions of Interest.”

With details of #PakistanJuniorLeague confirmed, PCB Chairman Ramiz Raja provides a roadmap for youngsters on how they can fulfill their dreams of representing Pakistan and achieving greatness. pic.twitter.com/MPkWzRHn9W

“Following the success of the Pakistan Super League and the ever-improving reputation of the PCB, the potential sponsors have shown excitement and expressed their interest in the city-based Pakistan Junior League in their endeavour to play an important role in helping the PCB to create an environment of brilliance by providing a clear pathway to the talented youngsters, which, in turn, will fortify our bench-strength and produce new national stars and heroes,” he added.

For more sports news and updates, follow us at InsideSport.IN