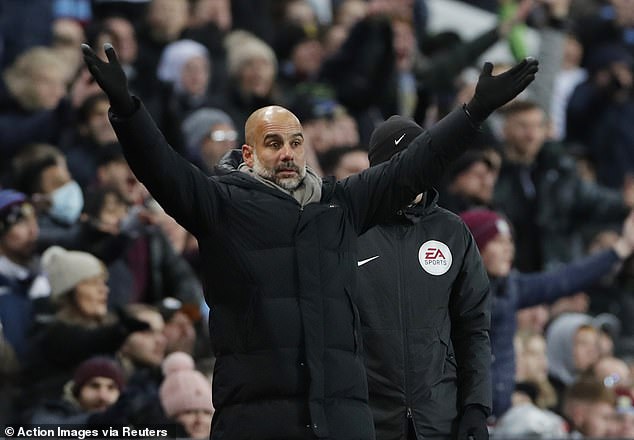 The very best of luck to anyone trying to break this particular Premier League record in the future.

Pep Guardiola has become the fastest manager to achieve 150 wins in the competition and the speed at which the Manchester City boss has reached the landmark is truly remarkable.

It’s taken just 204 matches for Guardiola to get there, a staggering win ratio of 73.5 per cent. 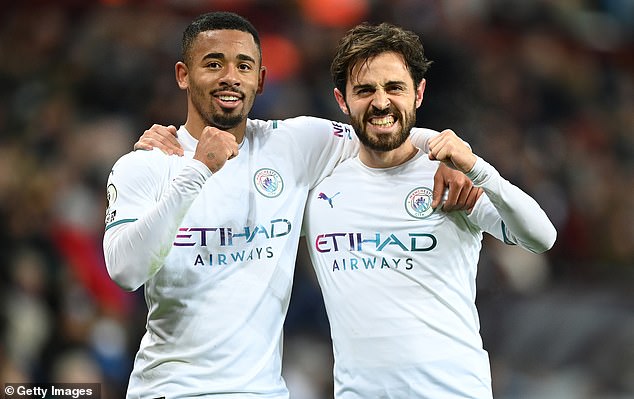 To put that into context, Jose Mourinho required 230 matches to reach 150 wins, Sir Alex Ferguson needed 247 and Arsene Wenger 258. Guardiola has blown these legendary managers out the water.

Of course it helps to have a team as talented as City’s, with almost £1billion of spending in the transfer market along the way, but the sheer consistency of winning is still remarkable.

No 150 in the Premier League since Guardiola arrived in England in 2016 came on Wednesday night as goals from Ruben Dias and Bernardo Silva guided City to a 2-1 win at Aston Villa.

Afterwards, speaking about the milestone, Guardiola said: ‘It’s a lot, we did it in a short time. What we have is achieved all together. 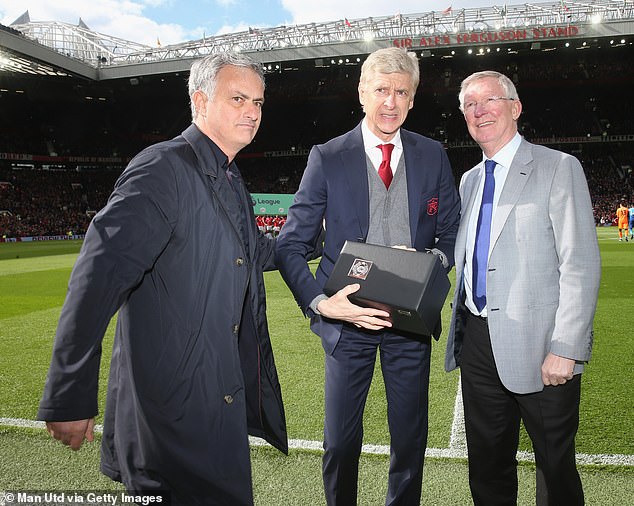 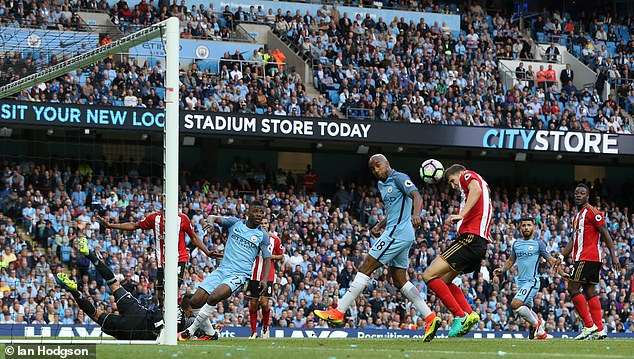 ‘It is a big compliment for the whole club, the chairman. There’s more to come, we’re going to fight and work and try to take good decisions and win more.’

That must sound ominous to this season’s title rivals Chelsea and Liverpool, with City aiming to win a fourth Premier League crown in five seasons.

In that time, Guardiola has maintained a win percentage in league games far higher than Mourinho (65 per cent), Ferguson (61) and Wenger (58) did in their first 150.

There have been 25 draws and 29 losses along the way, too, but overwhelmingly City have taken all three points. In fact, their average points return per match is an impressive 2.33. 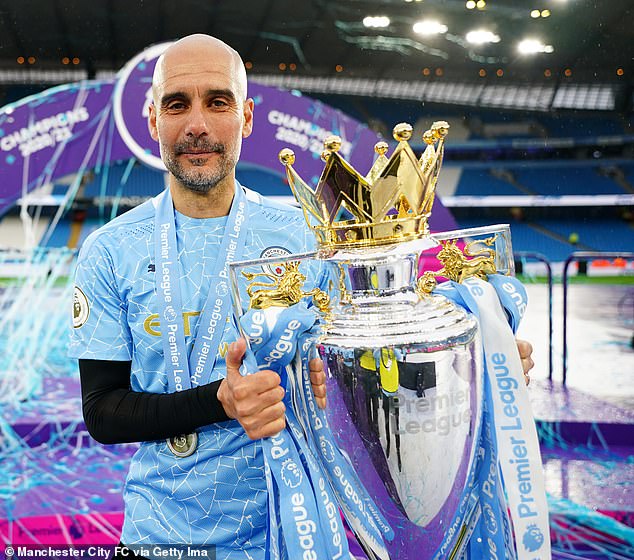 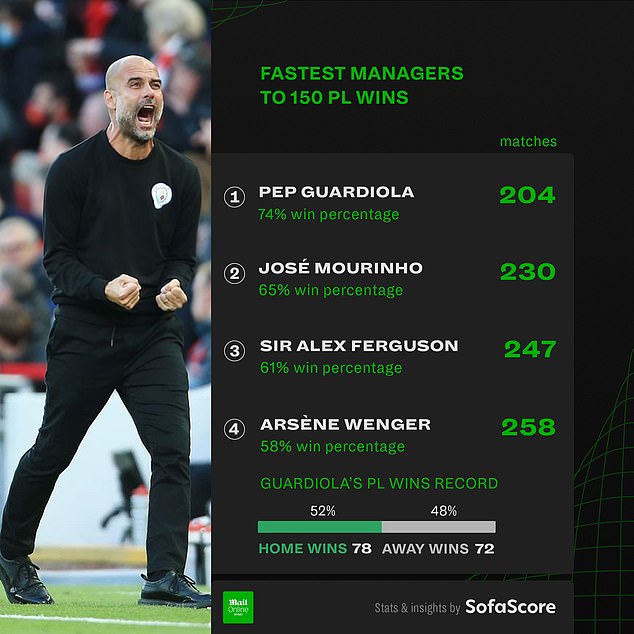 It also doesn’t seem to matter where City are playing – 78 of the wins have come at the Etihad Stadium and 72 on the road, with the Emirates Stadium, Turf Moor, London Stadium and Selhurst Park their favourite grounds.

That helps explain why Arsenal, Burnley and West Ham are Guardiola’s favourite opponents, with 10 wins recorded against each.

There have been some remarkable winning runs along the way, such as the 18 in a row during the first half of the 2017-18 season that propelled them to the title.

They also won 15 on the bounce between February and August 2019, a run that overlapped into the following season.

Guardiola’s City have certainly dished out some thrashings as well. The highest scoreline was 8-0 against Watford in September 2019 – and win No 151 might well come against that opposition, who City travel to face on Saturday at 5.30pm. 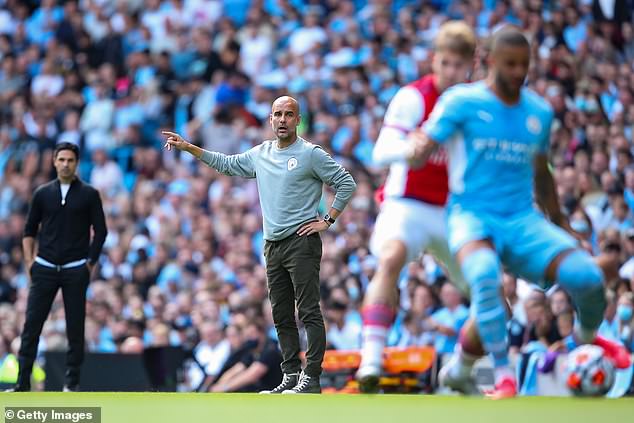 Guardiola enjoys managing against Arsenal, with 10 wins over the Gunners in the league 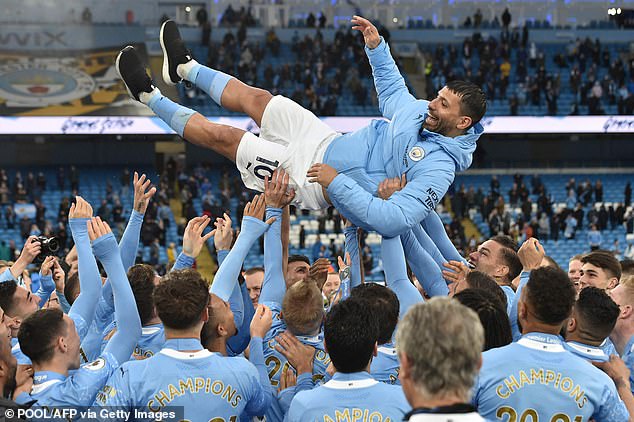 Sergio Aguero, who left the club in the summer, had scored 82 league goals under Guardiola

They have hit seven goals against Stoke City in October 2017 and six goals against Watford in September 2017, Huddersfield in August 2018, Southampton in November 2018, Chelsea in February 2019 and Aston Villa in January 2020.

City have racked up 495 goals during Guardiola’s 204 Premier League matches in charge and it perhaps isn’t any wonder to learn that club legend Sergio Aguero, who left last summer, has the most with 82. Kevin De Bruyne has the most assists, with 68.

Guardiola has suggested he will leave City in 2023, giving him just over a season-and-a-half to build on those 150 Premier League wins and perhaps win another couple of titles.

One thing can be said for certain – it will take a truly remarkable manager to reach Guardiola’s latest landmark in a faster time.