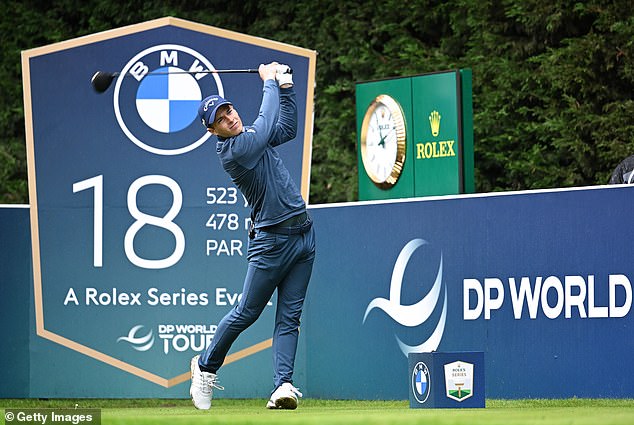 PGA Championship organisers have said they are planning to restart play at Wentworth this weekend after suspending operations following the death of Queen Elizabeth II on Thursday.

Flags on the grounds were lowered to half mast on Thursday afternoon and play was scrapped on Friday after Buckingham Palace announced the Queen had died peacefully at Balmoral.

However, the PGA organisers are hopeful of restarting play once they review protocol guidance from Buckingham Palace. They have also said they will ‘align’ their actions ‘with what other major sporting events in the UK are doing’.

The event organisers released the following statement according to BBC reporter Iain Carter: ‘We remain hopeful of restarting the BMW PGA Championship at some stage over the weekend.

‘We will take that decision once we have had the chance to review protocol guidance from Buckingham Palace in addition to aligning with what other major sporting events in the UK are doing. We will update you as soon as we have further information.’

At the time of the suspension, which came with 30 players yet to complete their first round, Fleetwood was jointly top of the leaderboard having excelled on his return to play after a seven-week absence to mourn the death of his mother.

The world No 29 endured the worst of the stormy weather but delivered the finest of first rounds to shoot an eight-under 64, with six birdies in the final seven holes of a bogey-free day. 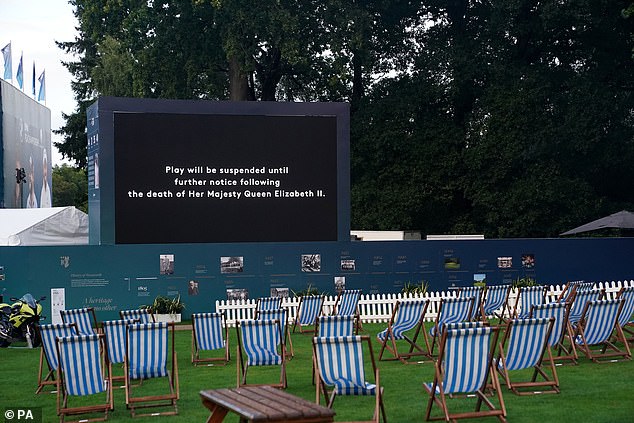 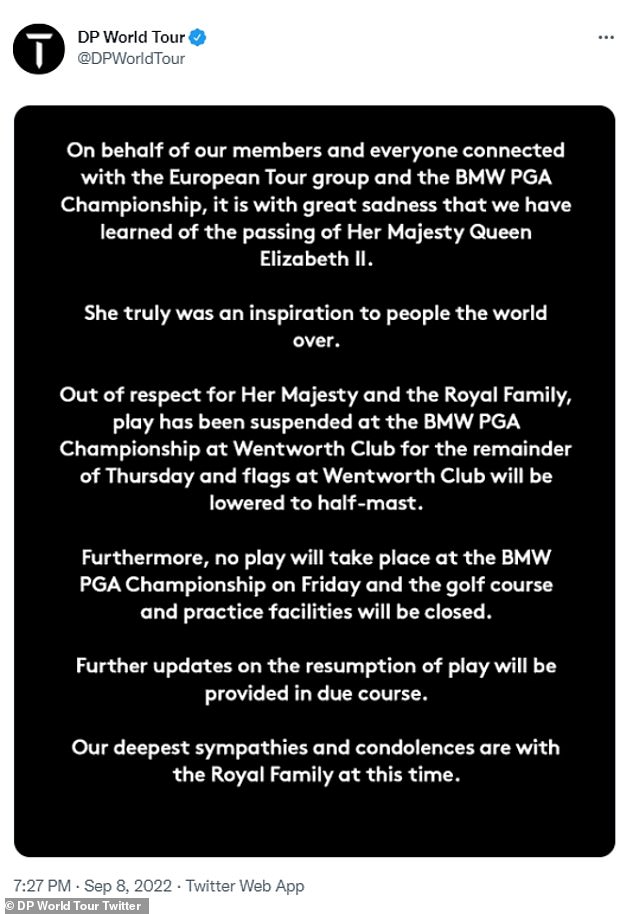 It tied him with Andy Sullivan and Norway’s Viktor Hovland, one stroke ahead of a third Englishman, Matthew Jordan. Rory McIlroy was among a cluster at four under in the flagship event of the DP World Tour.

However, play was immediately suspended following the death of Queen Elizabeth II and the PGA released the following statement:

‘On behalf of our members and everyone connected with the European Tour group and the BMW PGA Championship, it is with great sadness that we have learned of the passing of Her Majesty Queen Elizabeth II.

‘She truly was an inspiration to people the world over. Out of respect for Her Majesty and the Royal Family, play has been suspended at the BMW PGA Championship at Wentworth Club for the remainder of Thursday and flags at Wentworth Club will be lowered to half-mast.

‘Furthermore, no play will take place the BMW PGA Championship on Friday and the golf course and practice facilities will be closed. 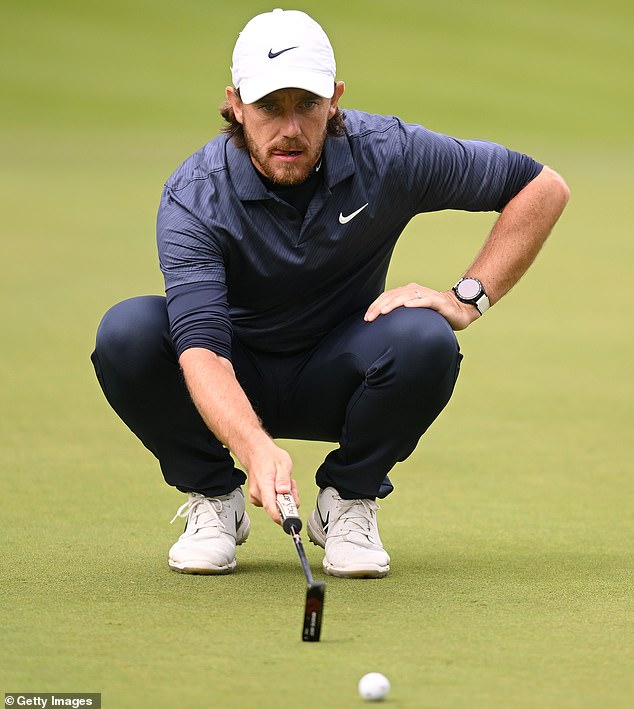 ‘Further updates on the resumption of play will be provided in due course. Our deepest sympathies and condolences are with the Royal Family at this time.’

Peter Forster, captain of the Royal and Ancient Golf Club of St. Andrews, also released a statement through the club saying: ‘We are greatly saddened to learn of the passing of Her Majesty today.

Following her accession in 1952, Her late Majesty graciously accepted the Patronage of The Royal and Ancient Golf Club of St Andrews, as has been the custom of reigning Monarchs since HM King William IV in 1834.

‘Although not a golfer, Her late Majesty’s 70-year patronage of the Club was a great honour for its members.  We hold His Majesty The King and all The Royal Family in our thoughts at this time of mourning.’

WHICH SPORTING EVENTS HAVE BEEN AFFECTED FOLLOWING THE DEATH OF THE QUEEN?

Manchester United’s Europa League clash with Real Sociedad at Old Trafford and West Ham’s game against FCSB in the Europa Conference League at the London Stadium went ahead on Thursday evening with pre-match tributes.

The Northern Ireland Football League announced that Friday night’s matches between Cliftonville and Glentoran and Larne and Dungannon have been postponed.

The English Football League also confirmed that Friday night’s Championship game between Burnley and Norwich and the League Two match between Tranmere and Stockport had been postponed, with a decision on Saturday’s fixtures yet to be made.

The Irish FA has announced that all football in Northern Ireland scheduled for this weekend will not take place.

Friday’s play between England and South Africa men at The Oval, along with all scheduled matches in the Rachael Heyhoe Flint Trophy, will not take place.

Northampton announced the postponement of their Premiership Rugby Cup clash against Saracens scheduled for Thursday evening.

Play was suspended for the day at the BMW PGA Championship and there will be no play on Friday.

Sunday’s Italian Grand Prix will go ahead as scheduled with a minute’s silence planned before practice on Friday and another expected before the race.

Racing at Southwell and Chelmsford on Thursday evening was abandoned. The British Horseracing Authority also announced the meetings scheduled for Friday – including the third day of the St Leger meeting at Doncaster – have also been cancelled.

The Great North Run, the world’s largest half-marathon, is set for Sunday. Organisers cancelled its 5k sister event on Friday, with a decision of the main race due on on Friday.

Friday’s Tour of Britain stage was promptly cancelled and later on Thursday evening the rest of the tour, which was set to finish on the Isle of Wight on Sunday, was called off entirely.