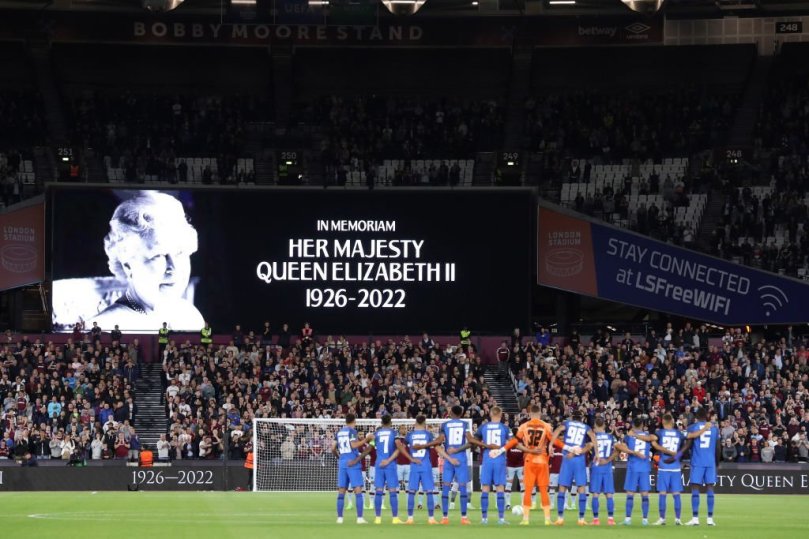 Premier League 2022-23: PL matches POSTPONED –  The UK government told football leagues that this weekend’s fixture can go ahead but has left…

Premier League 2022-23: PL matches POSTPONED –  The UK government told football leagues that this weekend’s fixture can go ahead but has left the decision up to the governing bodies.  Premier League officials are set to decide whether English football top-flight matches will go ahead on Friday morning following the death of Her Majesty The Queen after holding talks with the Government on Thursday night. According to various reports, top-flight clubs are expecting this weekend’s fixtures to be postponed with an announcement expected early on Friday morning – with the Premier League holding a meeting at 11 am BST. Follow Premier League 2022-23 LIVE updates with InsideSport.IN

Premier League 2022-23: PL matches could be POSTPONED following the death of Queen Elizabeth II, Richard Masters in talks with Government and Premier League clubs, Check out

Man United and Real Sociedad pay tribute to the passing of Queen Elizabeth II with black armbands and a moment of silence. pic.twitter.com/Z1n7wIoAuf

Premier League 2022-23: Matches could be POSTPONED following the death of Queen Elizabeth II

The organisation’s chief executive Richard Masters has told clubs that government guidance is unlikely to be ‘definitive’ and that they will have to make their own decisions with regards to fixtures.

The Department of Culture, Media and Sport (DCMS) will hold a call with all major sports at 9.30am to determine what will happen to the rest of this weekend’s calendar.

Almost all of Friday’s sporting programme was called off on Thursday night as a mark of respect, including day two of England’s Test match against South Africa, golf’s BMW PGA Championship at Wentworth and all racing, the Queen’s favourite sport.

Friday’s EFL fixtures — Burnley v Norwich and Tranmere v Stockport — have also been postponed. The rest of the football pyramid is likely to follow the lead set by the Premier League. The Irish FA has already announced that all football in Northern Ireland scheduled for this weekend will not take place.

A cancellation of the entire programme would create fixture congestion later in the season as there are no free midweeks between now and the mid-winter break for the World Cup, which begins in Qatar just seven days after the Premier League pauses.

The Champions League looks set to continue next week whatever happens this weekend, as Manchester United’s Europa League tie against Real Sociedad went ahead on Thursday night following guidance from UEFA.

There are no fixtures scheduled for the date of the funeral on September 19 as that is the start of the international break.