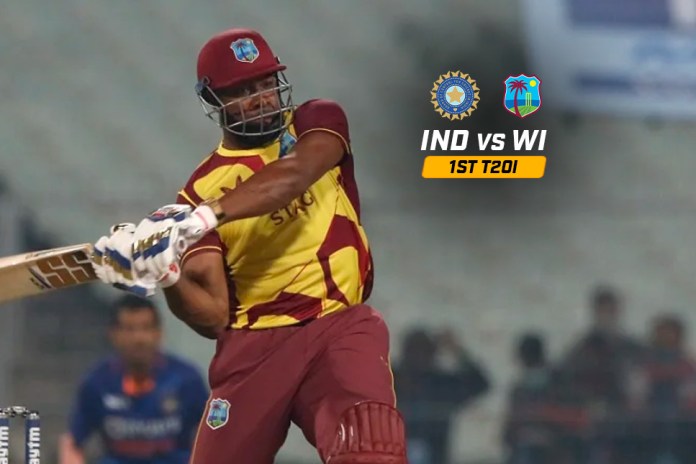 IND beat WI: Kieron Pollard unhappy with ball condition after dew- West Indies skipper Kieron Pollard expressed disappointment after his side got thrashed by India in the first T20I of the three-match series here at the Eden Gardens on Wednesday. Follow IND vs WI updates on Insidesport.IN

Ravi Bishnoi’s two-wicket haul was backed up by quality knocks by Rohit Sharma (40) and Suryakumar Yadav (34*) as India defeated West Indies by six wickets in the first T20I.

“Between overs 6-15 we only scored 46 in 9 overs and if we had 18-20 more runs during that phase it would have been competitive. After six overs they were in front, but I thought the bowlers and fielders did really well to pull things back. Different times calls for different things, they have quality bowlers and we have to play it as we see it,” said Pollard after the game.

“The guys are working hard to get things right and again it’s just a matter of setting it up properly. The ball was wet and the bowlers were bowling high full tosses and I wanted them to have a fair share to execute. Having said that, it was a very, very good game of cricket,” he added.

Chasing 158, India got off to a quickfire start as openers Rohit Sharma and Ishan Kishan put on 58 runs inside the first six overs. The 64-run opening stand finally came to an end in the eighth over as Roston Chase got the better of Rohit (40). Chase got his second wicket in the 12th over as he dismissed Kishan (35) and India was reduced to 93/2, still needing 65 runs for the win.

IND beat WI: In the next over, India was given a body blow as Fabien Allen had Virat Kohli (17) caught at the hands of skipper Kieron Pollard at long-off and this meant there were two new batters at the crease — Rishabh Pant and Suryakumar Yadav. Pant (8) failed with the bat as he was dismissed by Sheldon Cottrell and India was reduced to 114/4 in the 15th over.

In the end, Suryakumar (34*) and Venkatesh Iyer (24*) ensured that India register a six-wicket win with seven balls to spare.

With this win, India has gained a 1-0 lead in the three-match series and the second T20I will now be played on Friday at the same venue.