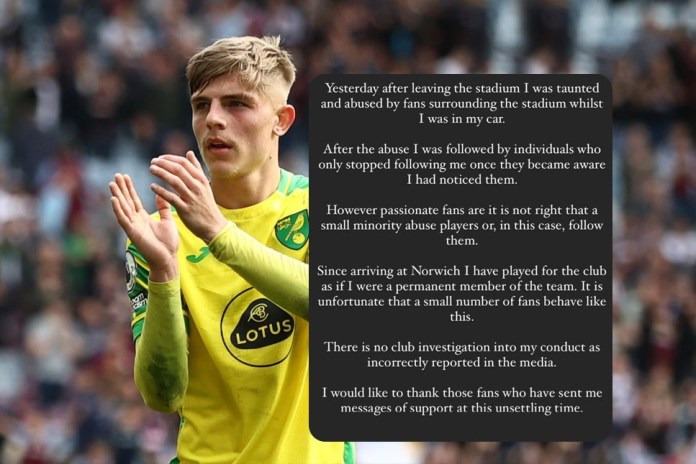 Premier League: Brandon Williams Norwich City – Manchester United defender Brandon Williams is not under investigation by Norwich City over Instagram posts he uploaded. The United academy graduate started in Norwich’s 4-0 home defeat to West Ham and the player has clarified he was abused after the game and then followed home. Follow InsideSport.IN for the latest Premier League news.

Williams is on a season-long loan at Norwich, who have been relegated back to the Championship for the second time in the last three seasons.

Premier League: Brandon Williams says, “I was taunted and abused by fans”

Williams responded to fans trailing him by uploading a post of his dog onto his Instagram page that read: “For the people that followed me, he’s always awake”. He also posted a picture of his middle finger raised with the caption, “What a beautiful day easy up Norwich City FC.”

The 21-year-old shed light on the situation which Norwich were reportedly investigating. In a statement which was deleted just a few minutes after being posted on social media, Williams explained: “Yesterday after leaving the stadium I was taunted and abused by fans surrounding the stadium whilst I was in my car.

“After the abuse I was followed by individuals who only stopped following me once they became aware I had noticed them. However passionate fans are it is not right that a small minority abuse players or, in this case, follow them. Since arriving at Norwich I have played for the club as if I were a permanent member of the team.

“It is unfortunate that a small number of fans behave like this. There is no club investigation as incorrectly reported in the media. I would like to thank those fans who have sent me messages of support at this unsettling time.”

The United academy graduate was given his debut by former manager Ole Gunnar Solskjaer in September 2019 after impressing in the club’s youth ranks as a teenager. Earning a lucrative new deal less than 12 months later, Williams has a contract with the Red Devils until June 2024, with the option of an extra year.

Brandon Williams is eager to make his name in the Manchester United starting XI as he faces the competition of Luke Shaw and Alex Telles on left-back but with his ability to play right-back gives the new manager Erik ten Hag plenty to ponder upon.