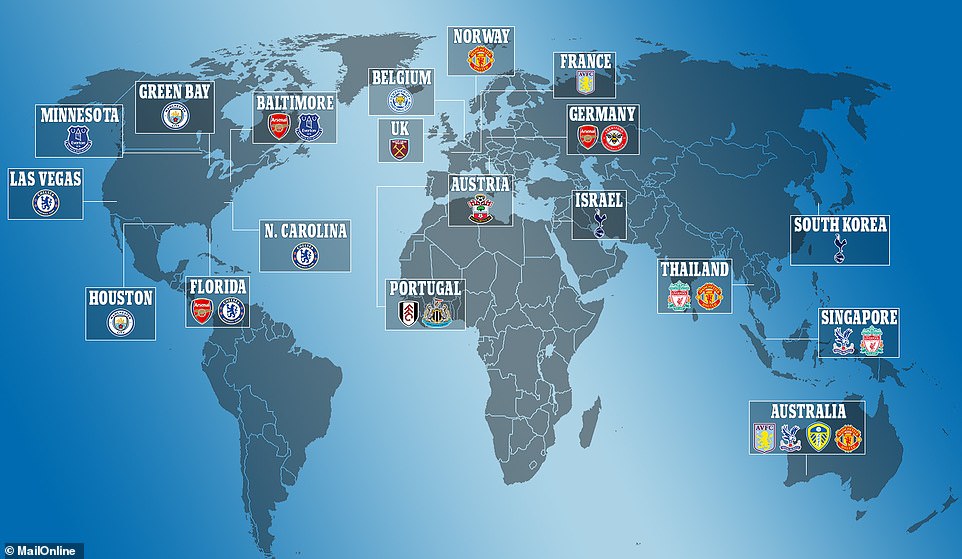 After two Covid-disrupted years, it comes as little surprise that the Premier League powerhouses are desperate to jet off all over the world for their pre-season preparations.

Those money-spinning jaunts are very much back on the fixture calendar, especially with the World Cup being shunted to the winter months, in the name of getting match sharp for what will be another exhausting season.

For supporters of the big clubs based in Bangkok, South Korea, Singapore, Australia and the United States, there will be a fresh opportunity to see their heroes in the flesh.

But China looks to be off-limits for the Premier League clubs which may or may not be a reaction to the Covid pandemic originating and persisting there in once-popular host cities such as Shanghai.

Not every club has announced their pre-season intentions yet, and quite a few appear content to restrict their travel to European destinations, but it’s very clear that jet-setting is back for the big clubs and names.

Sportsmail takes a look at the plans of the major Premier League clubs and how many air miles they’ll be racking up this summer.

With Covid restrictions easing, Premier League pre-season tours are back with a vengeance in the weeks ahead. Several clubs will jet off to far-flung destinations to get tuned up for the new season with Australia and the United States most popular

Last season ended agonisingly for the Gunners as they missed out on Champions League qualification to their bitter rivals Tottenham in the closing weeks of the season.

Preparations for the upcoming campaign will take them first to Germany to play 2. Bundesliga club Nuremberg, a straightforward round trip of just over 1,000 miles from London.

Then the real travelling begins with a two-stop, three-match tour of the United States. Baltimore is their first port of call for what is being billed as The Charm City Match against Everton at the 70,000-capacity M&T Bank Stadium, the home of NFL franchise Baltimore Ravens. 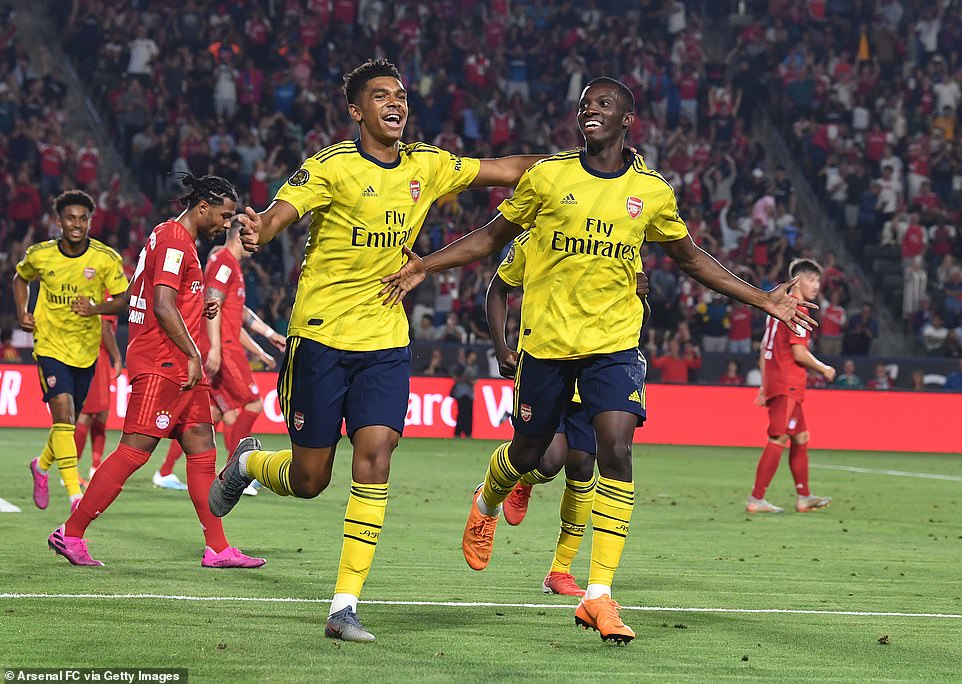 From there, it’s down America’s east coast to sunny Orlando for two games in the Florida Cup against local MLS club Orlando City on July 20 and then more familiar foes in the form of Chelsea three days later.

Arsenal had been due to compete in the Florida Cup 12 months ago but a number of positive Covid cases forced them to call the trip off.

Mikel Arteta and his squad will then fly back for the Emirates Cup fixture with Sevilla on home turf on July 30, a week before the Premier League campaign opens. 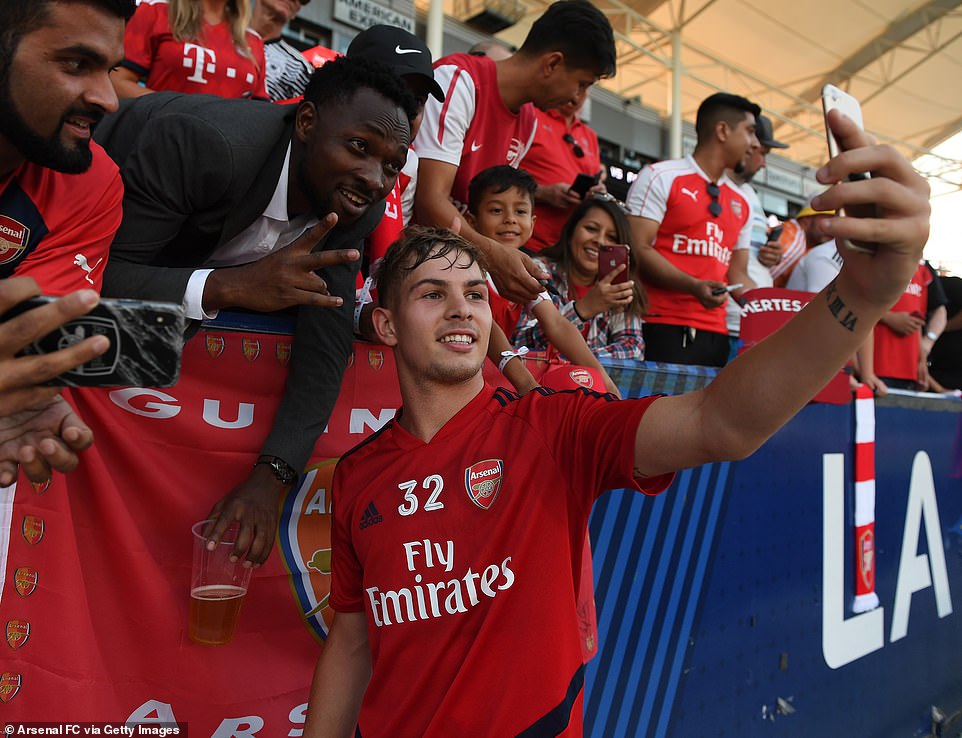 The Blues are also heading stateside this year – with the plans in development some time before American Todd Boehly completed his takeover of the club.

They won’t be heading to Los Angeles to watch Boehly’s Dodgers but will be zipping about the country with three matches in three different locations.

First up, Las Vegas and the Allegiant Stadium for a meeting with the prominent Mexican team Club America on July 16. This venue is home to the Las Vegas Raiders of the NFL and holds a little over 60,000 for soccer games. 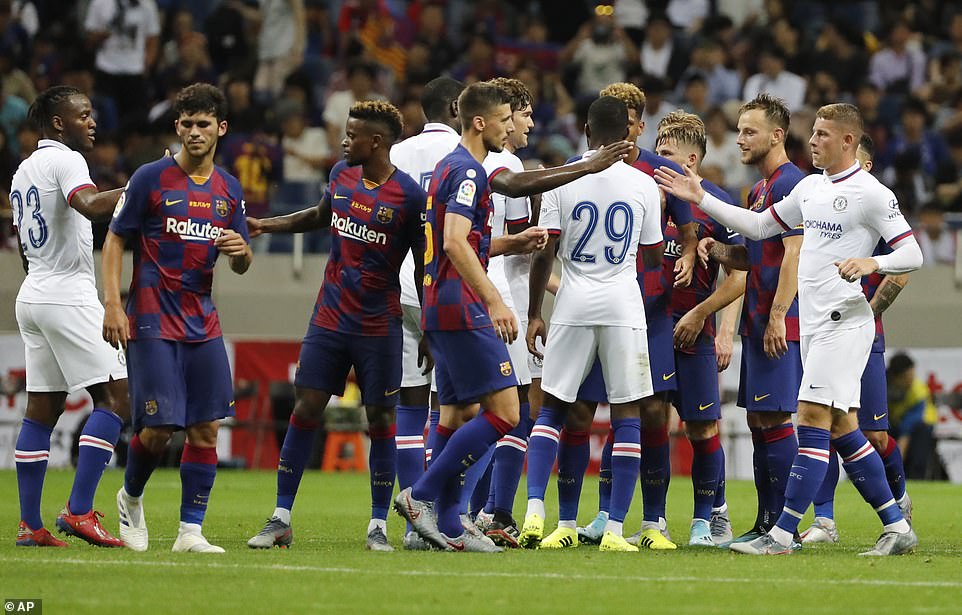 Chelsea took on Barcelona in Saitama the last time they went on a pre-season tour back in 2019, winning the match 2-1

Then it’s a cross-country flit to North Carolina and Charlotte for a match with the local MLS team at the Bank of America Stadium, home to the Carolina Panthers.

After that, a relatively short flight to Orlando for the aforementioned encounter with London rivals Arsenal in the Florida Cup. The Camping World Stadium, under a different guise, hosted five games at the 1994 World Cup. 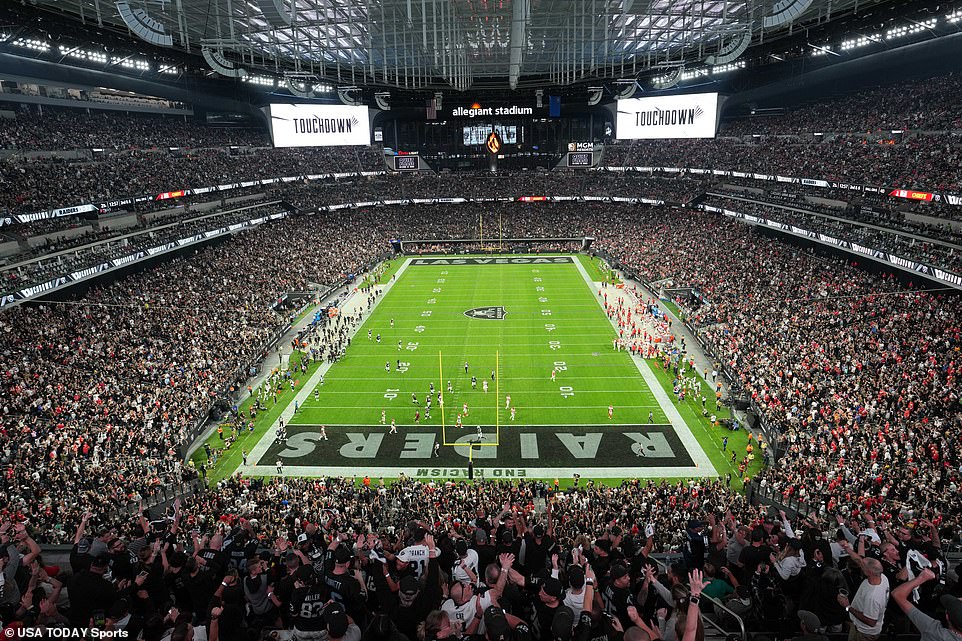 The Reds’ 2021-22 campaign went on longer than most as they reached the final of the Champions League, losing to Real Madrid in Paris.

With many of their stars subsequently in international action, it means a very small window of rest and recovery before they jet off to the Far East for their pre-season tour.

Two stops have been announced, with an intriguing meeting against Manchester United at the Rajamangala National Stadium in Bangkok, Thailand first up on July 12.

From there, Liverpool head on to Singapore and a game against more Premier League opposition, this time Crystal Palace, at the 55,000-capacity National Stadium there on July 15. 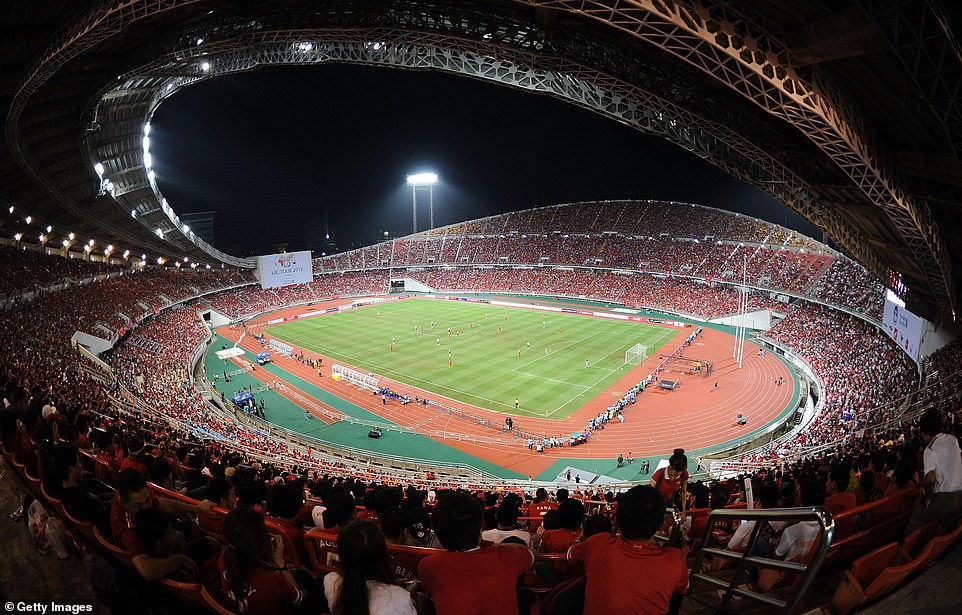 A full house at the Rajamangala Stadium in Bangkok, Thailand for Liverpool’s game with the national team back in 2013

Liverpool are likely to announce more friendlies but, as the FA Cup holders, they also take on Premier League champions Manchester City at Leicester’s King Power Stadium in the Community Shield on July 30.

With the World Cup cutting a huge swath out of the 2022-23 season, everything has been pushed forward. 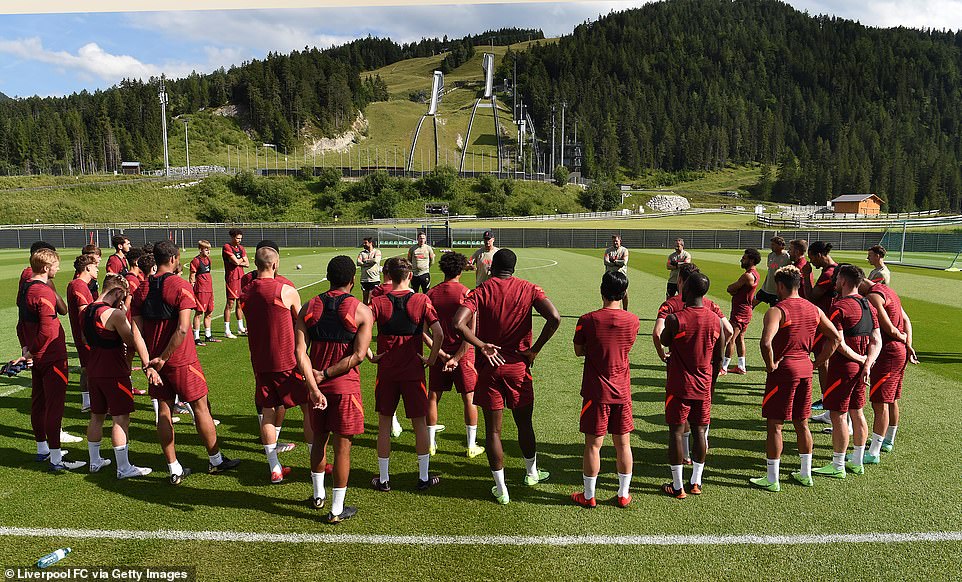 The Premier League champions are also heading across the Atlantic to gear up for their title defence with two tour matches planned.

City will play Club America at the NRG Stadium in Houston on July 21, with the Mexicans facing their second Premier League opponent in a matter of days. The arena is home to the Houston Texans NFL franchise and holds over 70,000.

Pep Guardiola and his team then head on to Green Bay and historic Lambeau Field, home of the Packers, which is hosting a soccer match for the first time ever. 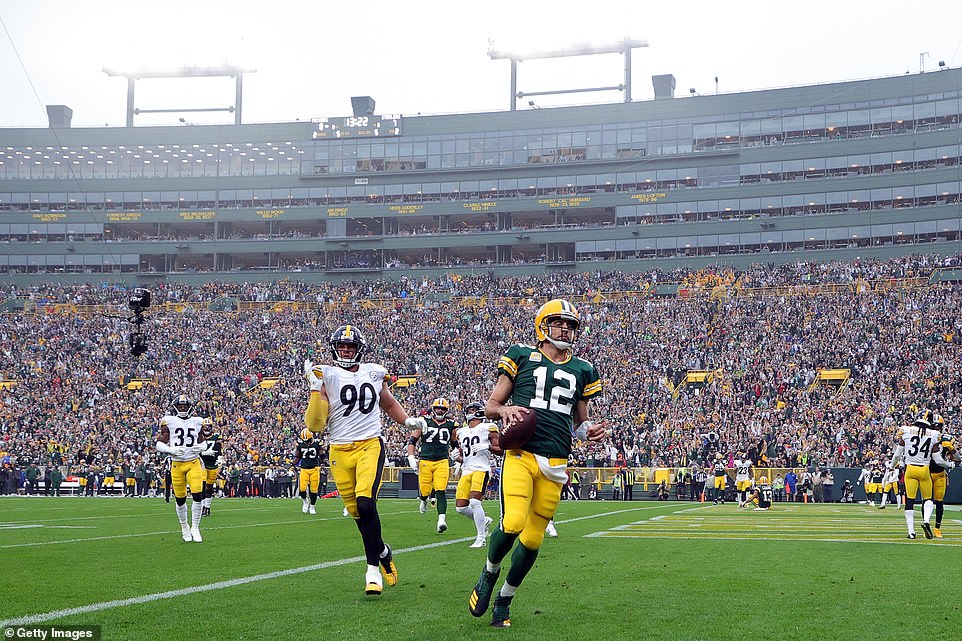 City will be playing Bayern Munich there on July 23, which is just a week before the Community Shield curtain-raiser with Liverpool in Leicester. 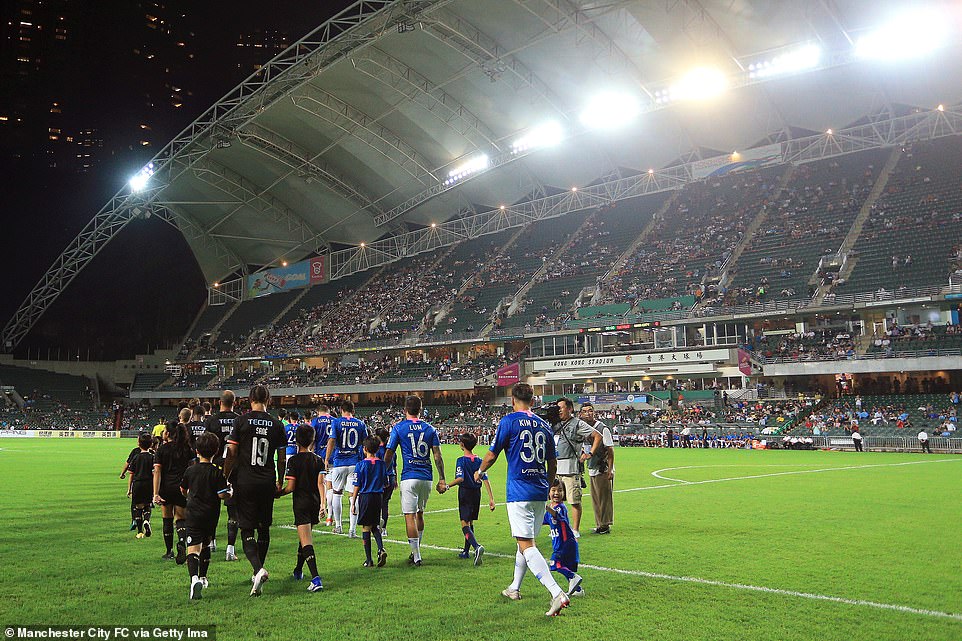 Manchester City walk out to play Kitchee in Hong Kong during their last pre-season tour, to the Far East, in summer 2019

It’s a typically packed pre-season schedule for United, who enjoy worldwide popularity and were among the first English clubs to harness the commercial potential of vast pre-season tours.

Quite whether new manager Erik ten Hag, the quintessential tracksuit and training ground manager, enjoys all the exhaustive travelling is another matter. In all, it comes to over 22,000 miles in the air.

They’re heading to the other side of the globe once more, starting with that meeting with Liverpool in Bangkok, Thailand on July 12.

From there, it’s off to Australia for two fixtures at the iconic Melbourne Cricket Ground that are likely to come close to selling out its 100,000 capacity. 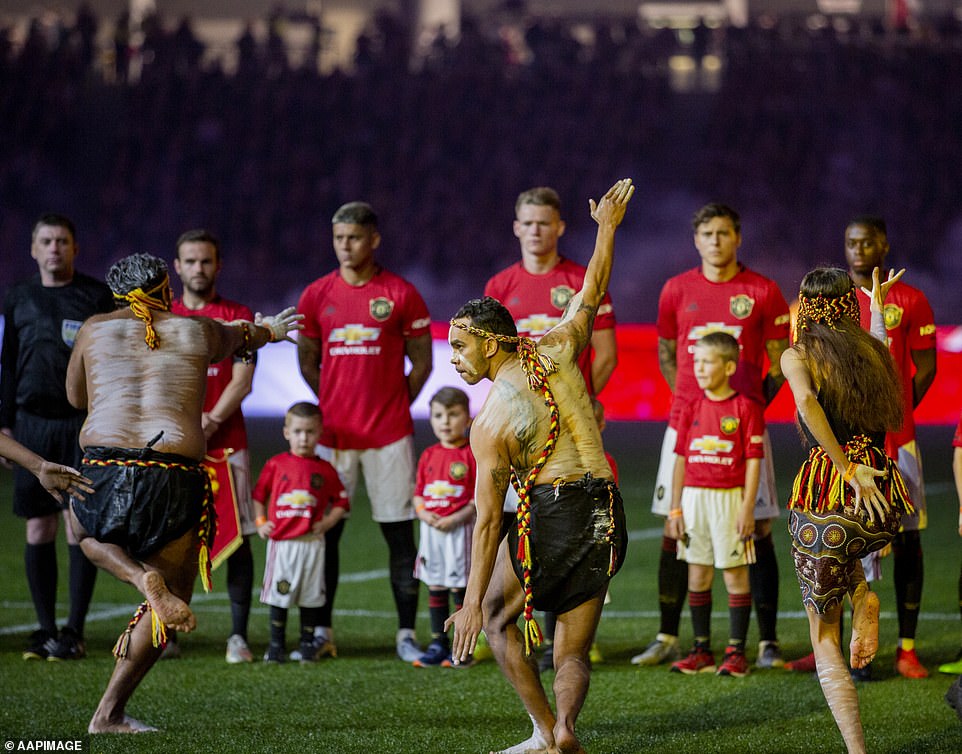 United play A-League club Melbourne Victory on July 15 and then Crystal Palace, who beat them on the final day of the Premier League season, on July 19.

A cross-country flight follows to Perth, where Aston Villa await them at the 61,000-capacity Optus Stadium on July 23.

One final, closer stop was then added – a visit to the Norwegian capital Oslo and the Ullevaal Stadion for a friendly with Atletico Madrid on July 30, a week out from the start of the new season.

Plenty of time in the air ahead for Tottenham as well this summer with Antonio Conte’s team heading to South Korea, where no doubt Son Heung-min will be the main attraction.

They will play two matches out there in the Coupang Play Series, first against a Team K-League XI at the Seoul World Cup Stadium on July 13.

From there, it’s a short hop to Suwon for a meeting with Spanish club Sevilla on July 16.

Spurs also have announced a friendly with Rangers at Ibrox on July 23 and then fly off to Haifa in Israel for the I-Tech Cup fixture against Roma on July 30. 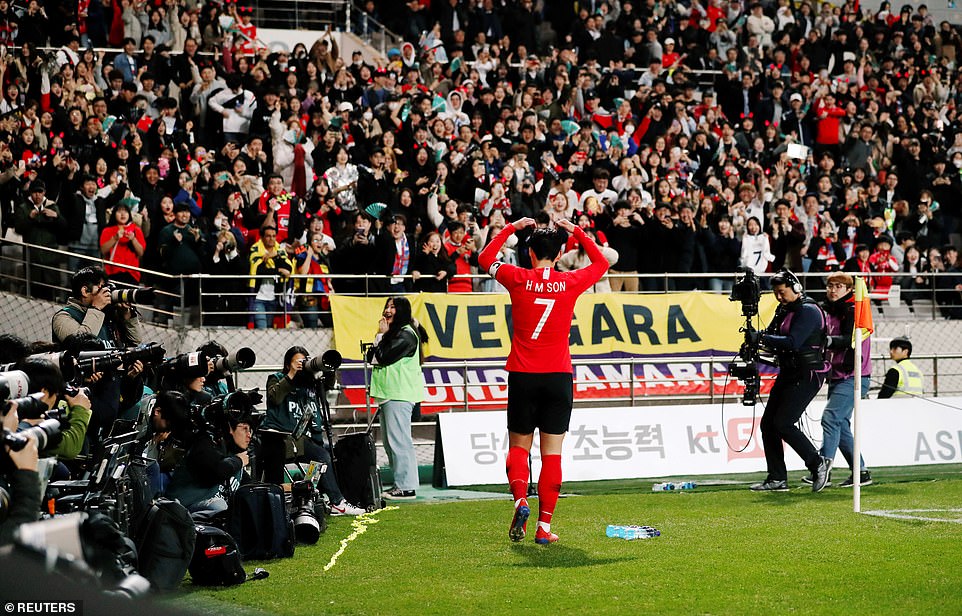 Other clubs racking up the miles

The top six aren’t the only ones going long-haul over the summer.

Aston Villa are also heading Down Under with a three-stop Australian tour planned – they take on Leeds United in Brisbane, Brisbane Roar in South Townsville and then Man United in Perth.

Steven Gerrard’s team also have a shorter trip to French club Rennes booked in for July 30 and are set to fly some 22,755 miles on their pre-season adventure.

Palace, for their part, are off to Singapore to take on Liverpool before matches against Man United in Melbourne and Leeds United in Perth.

In total, Patrick Vieira’s team will fly 21,194 miles during pre-season.

Leeds United have also decided to head to Australia this summer, with games arranged against Brisbane Roar in Robina on the Gold Coast, Villa in Brisbane and Palace in Perth. 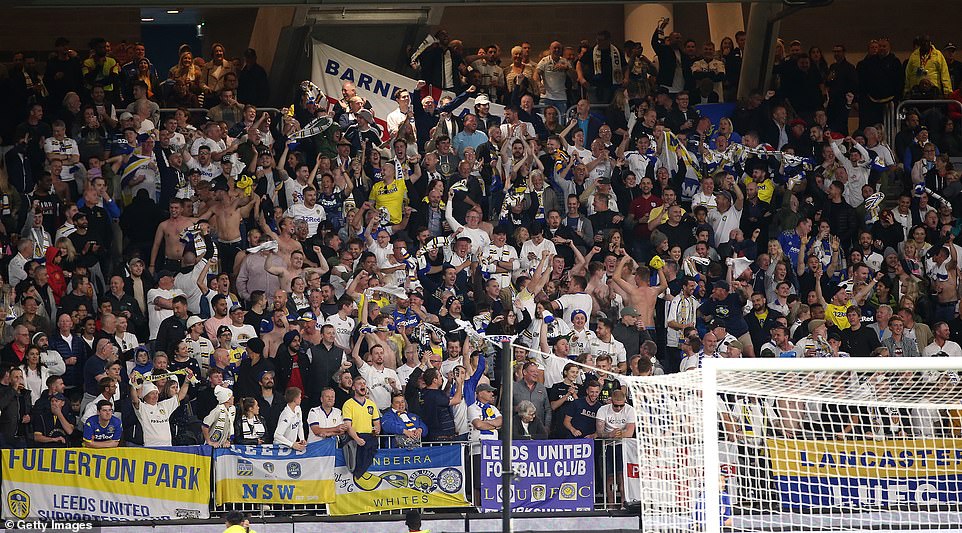 Everton are going off to the United States as they build up to what they hope will be a less fraught campaign than the last one.

They will take on Arsenal in Baltimore on July 17 and then Minnesota United at Allianz Field on July 21, a round trip of 8,239 miles.

Other clubs have unveiled more modest plans although some schedules need to be fleshed out a little bit more.

Brentford are going to Germany, Fulham to the Algarve, Southampton to Austria, Leicester to Belgium and Newcastle to Lisbon in friendlies already confirmed.

West Ham, meanwhile, will be remaining pretty local – at least in the fixtures so far announced – with games against Ipswich, Boreham Wood, Reading and Luton.