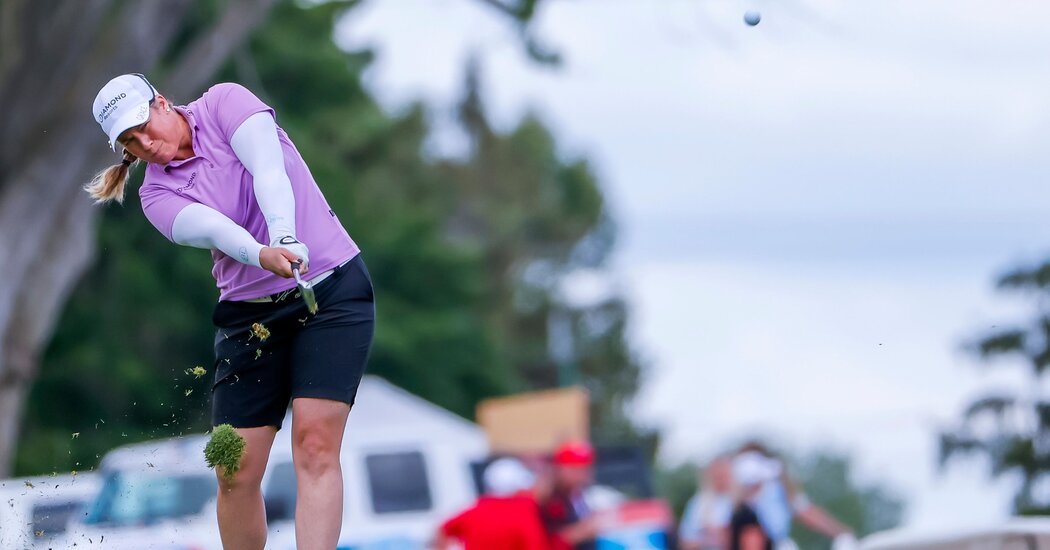 Brittany Lincicome started playing on the L.P.G.A. Tour in 2005, when it was a struggling endeavor with few events. Now, in her 18th season, the tour is thriving and she has no plans to retire any time soon.

“My parents had said, ‘Play 10 years and you can retire,’” Lincicome said. “Now there’s no end in sight. The prize money is out there. The purses are going up every year. It would be hard to leave. Plus, I would love to get a win and have my daughter there with me.”

Lincicome, who is pregnant with her second child, said the difference between her rookie season and today is the sponsors, who have elevated the quality of the courses the golfers play. “It’s cool to see where we came from and what direction we’re going,” she said.

Her first major victory came in 2009 at the Chevron Championship, formerly known as the ANA Inspiration and an L.P.G.A. major since 1983. This year’s tournament, which begins on Thursday and has long been associated with Dinah Shore, an actress, talk show host and early supporter of the women’s tour, will be the last to be held at the Mission Hills Country Club in Rancho Mirage, Calif.

A central part of the event has been Poppie’s Pond, where the champion, her caddie and any number of friends and family take a victory plunge adjacent to the 18th green.

Whether the pond will move to Houston, where Chevron is headquartered next year, as part of the company assuming the title sponsorship, is unclear. But, pond or not, one of the five women’s majors has a corporate sponsor to keep it going, with a purse that has increased nearly $2 million this year, to $5 million from $3.1 million.

“It’s bittersweet,” said Stacy Lewis, whose first professional victory came at the event in 2011, when Kraft Nabisco was the sponsor. “It will always have a special place for me. But as a tournament it was time. When we lost Kraft, the tour needed a lot of time bringing ANA on board. And the fan base has shrunk over the past 10 years.”

While the L.P.G.A. Tour lags behind the PGA Tour in prize money, sponsors for the best female golfers in the world have been stepping up — new deals for tournaments, money for the developmental tour and increased support for athletes who want to have families.

“The purses are super important so we can have the best tournament schedule that we can put together and allow the best women in the world to reach their goals,” said Mollie Marcoux Samaan, who became the L.P.G.A. commissioner last year.

Such increases have come slowly. A decade ago, Marcoux’s predecessor, Mike Whan, now the chief executive of the U.S.G.A., encouraged players to talk about their golf, but to make sure they thanked sponsors for getting behind the tour.

In his new role, Whan has brought in ProMedica, a health care company, as the first presenting sponsor of the U.S. Women’s Open. The purse has nearly doubled, to $10 million from $5.5 million. But it wasn’t easy.

“I saw how much money the U.S.G.A. lost on the U.S. Women’s Open,” Whan said. “I could see they were doing the right thing. But they weren’t reaching out to companies that also wanted to do the right thing.”

The companies that are coming in as sponsors of the L.P.G.A. Tour are aligning their financial backing with broader diversity, equity and inclusion initiatives. KPMG was among the first to do so with its sponsorship of the Women’s P.G.A. Championship in 2014.

“We’ve more than doubled the purse since then,” said Shawn Quill, managing director and national sports industry leader at KPMG. “We’ve been able to put the L.P.G.A. players on the best courses in the world, the same ones that the men play.”

This year’s event is at Congressional Country Club, where Rory McIlroy won the men’s U.S. Open in 2011.

As a title sponsor, KPMG has not only increased the prize money, but has also added a women’s leadership summit, which focuses on C-suite executives and future leaders. “As sponsors, we saw this could be more than a hospitality event,” Quill said.

Aon, the professional services company, sponsors a season-long competition that collects the best scores on the toughest hole each week on both the PGA and L.P.G.A. tours. It made a commitment in 2019 to pay the same $1 million prize to the male and female golfers who won the challenge.

“It ties into our inclusion and diversity strategy,” said Jennifer Bell, chief executive of North America for Aon. “We also want to influence other sponsors since we’ve taken on this challenge.”

“When I handed the $1 million check to Hannah Green last year, she had a smile on her face from ear to ear,” said Bell. “I said, ‘What are you going to do with it?’ She said, ‘I think I’m going to buy a home’. She still lived with her mom.”

The disparity in earnings between players on the men’s and women’s tours is enormous. Total prize money on the PGA Tour jumped to $427 million in 2022 from $367 million, a figure nearly five times that of the L.P.G.A. Tour. That has meant many top female golfers are living more modestly.

Epson America, the United States subsidiary of the Japanese printer and imaging company, has created three additional benefits for players on the Epson Tour, guaranteeing minimum tournament purses of $200,000 and awarding a $10,000 stipend to the 10 players who graduate to the L.P.G.A. each year. It has also lowered entry fees.

“They’re one of the biggest barriers,” said Meghan MacLaren, a winner on the Ladies European Tour who is now playing on the Epson Tour. “Before I add all the other stuff on, like flights, hotels, and travel, you’re looking at $10,000 for 20 events.”

Increased prize money at the top of the L.P.G.A. or Epson Tour invariably trickles down to players who finish out of contention.

“What we really liked about the sponsorship is we’re investing in the future of women’s golf,” said Keith Kratzberg, chief executive of Epson America.

Corporate sponsors have also begun promoting the values they espouse in their companies with their athletes.

When Lewis was pregnant in 2018, she worried about telling her sponsors. In the past, some sponsors hadn’t paid golfers who didn’t play a certain number of events, usually between 18 and 20 tournaments. Two of the most dominant players of their eras, Annika Sorenstam and Lorena Ochoa, both of whom were ranked No. 1 in the world, retired from golf in their primes to have children.

For Lewis, it was different. “KPMG said, ‘We’re going to pay you whether you play your 20 events or not,’” she said. “We’re going to treat you like any employee at KPMG.”

When she went public with the company’s promise, all but one of her sponsors also agreed to pay her in full.

“That set the bar for other companies,” said Gerina Piller, a 15-year tour player who often travels with her son. “It paved another way to make it possible to chase our dream and be a mom and not get stuck with the decision of, do we play or do we stay home?”