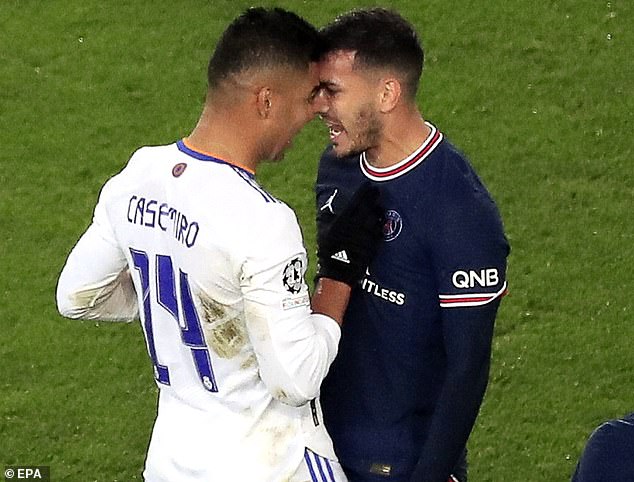 Real Madrid’s second leg with Paris Saint Germain will be played out on the backdrop of increasing deteriorating relations between the two clubs after the French side’s narrow win on Tuesday night.

Several Spanish journalists at the Parc des Princes claimed PSG president Nasser Al-Khelaïfi and Sporting Director Leonardo sought out the referee at half time to berate him over first half decisions.

And Madrid were unhappy that both the players they had on yellow cards going into the game – Ferland Mendy and Casemiro – were cautioned and will miss the second game.

Madrid coach Carlo Ancelotti said: ‘The two players that we had on a caution were both booked. I think the two yellows were gifted a bit.’

Ancelotti’s comments and the accusation that the referee was approached came after comments from Al-Khelaïfi after a pre-match meal between the two club’s directors.

He said: ‘I am not going to hide it we have almost no relation with Real Madrid.’ In reference to the Super League Madrid president Florentino Perez has proposed, Khelaïfi added: ‘I believe in football that is accessible for small clubs. They don’t think the same way.’ 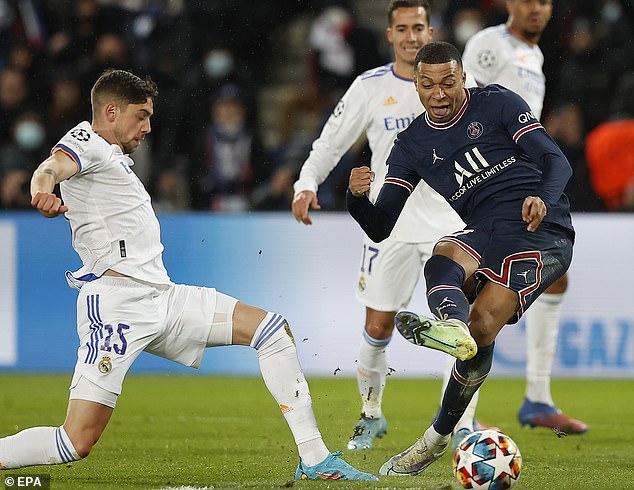 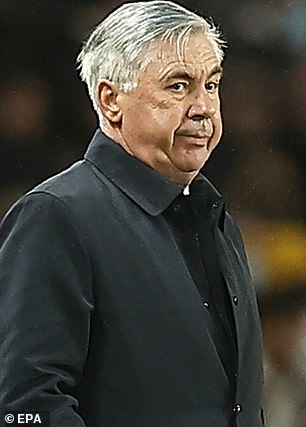 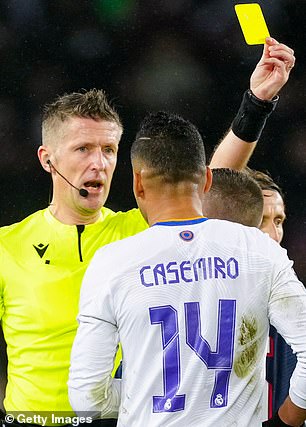 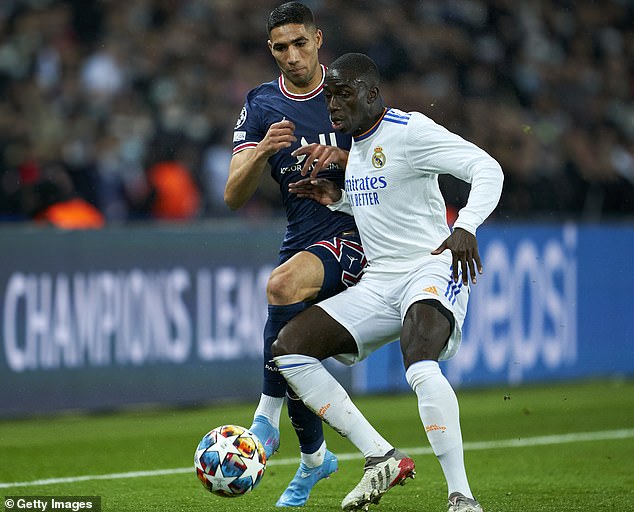 As well as Casemiro, Ferland Mendy will also be absent for next month’s second leg

Tensions over the Super League are nothing in comparison to the feelings around the almost certain departure of Kylian Mbappe to Real Madrid on a free transfer at the end of the season.

He got the late goal and then gave a post match interview in perfect Spanish saying: ‘I will give everything for this club until the end of the season and then we will see.

‘We did not play well,’ admitted Ancelotti. Things would have been much worse if not for his goalkeeper.

Madrid’s best player on the night Thibaut Courtois said he was well prepared for a Leo Messi penalty after saving the Argentine’s spot-kick to keep Real Madrid in their last-16 tie.

‘I’ve studied him a lot; both his kicks at Barcelona and for PSG in Ligue 1,’ he said.

‘I was playing with him a bit with my movement on the line and the save helps us for the second leg.’

Courtois was beaten by Mbappe in injury time having saved brilliantly from him in both halves. ‘I saved a few from Mbappe but he scored,’ he said. ‘That’s why he is one of the best in the world. It’s very hard to concede so late and 0-0 would have been better to take back but we still would have needed to win at the Bernabeu so that doesn’t change.’

The cheers when his name was announced at the start of the game came as much from Madrid’s pocket of away fans than the home supporters but it was the PSG crowd singing his name on the final whistle.