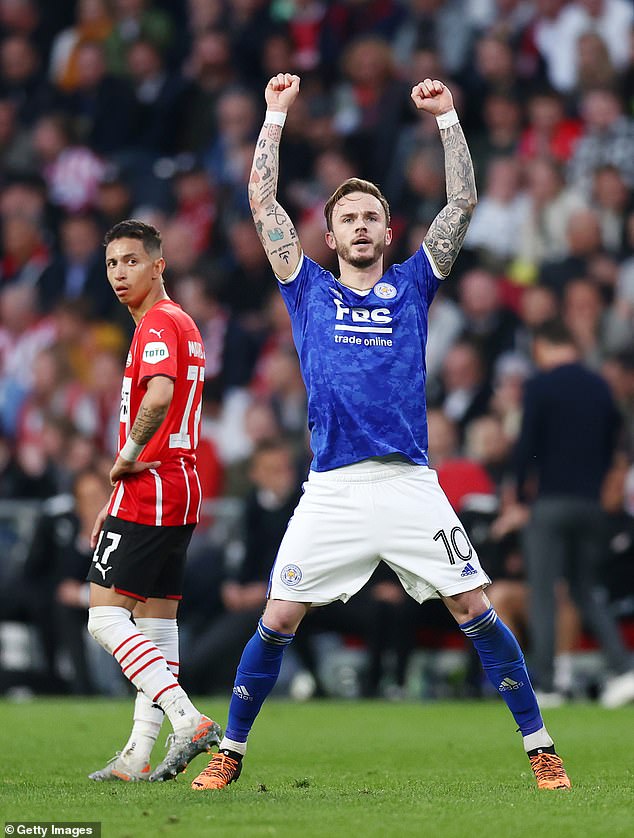 For the third time in six years, Leicester City moved into uncharted territory after Ricardo Pereira’s late winner sent them into the first European semi-final in their history.

After breaking new ground by winning the Premier League in 2016 and the FA Cup last year, the Foxes are now two wins away from becoming the first club to lift the Europa Conference League.

This tournament was introduced only at the start of this season and Leicester are in it because they dropped out of the Europa League – but none of the 1,600 fans who witnessed a fabulous second-half performance against PSV Eindhoven.

Attending a European away game for the first time this season, owner Aiyawatt Srivaddhanaprabha staged an impromptu meet and greet with supporters in the town centre earlier in the day and would have been delighted with what he saw.

Trailing at the break due to Youri Tielemans’ mistake that let in Eran Zahavi, Leicester missed chances before James Maddison equalised with 13 minutes left and then Pereira struck in the 88th minute. Maddison and his team-mates had bottles thrown at them after the playmaker celebrated his goal provocatively.

Brendan Rodgers’ tactical changes worked to perfection while Wesley Fofana delivered another magnificent display at the heart of defence. The winners of this competition will qualify for the Europa League next season. 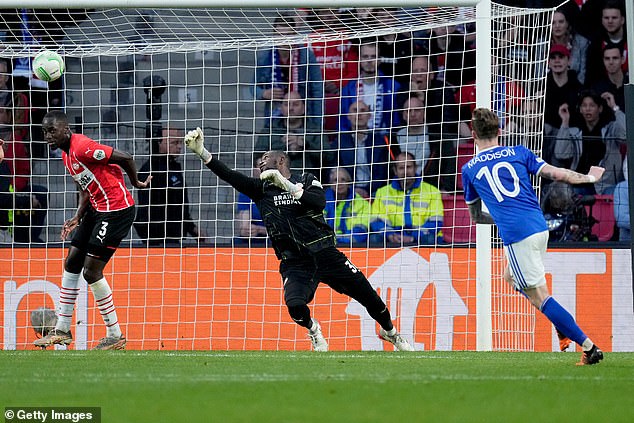 Leicester started with the same XI who began last week’s first leg as young English winger Noni Madueke missed out for PSV due to injury.

The Dutch side were having plenty of joy on the left in the early stages and in the 14th minute, Philipp Max crossed for Mario Gotze to hit a sweet far-post volley that Kasper Schmeichel did superbly to turn over.

Two minutes later, Leicester should have taken the lead. Kelechi Iheanacho played a clever return pass that sent Harvey Barnes racing clear, only for the winger to slide his finish past the post with just goalkeeper Yvon Mvogo to beat. Had Barnes looked up, he could have presented Maddison with a tap-in.

That miss preceded a period of dominance for PSV that eventually led to the opening goal. Wesley Fofana’s block denied Max and Schmeichel pushed Mauro Junior’s effort behind, before Tielemans’ error gifted them the lead. 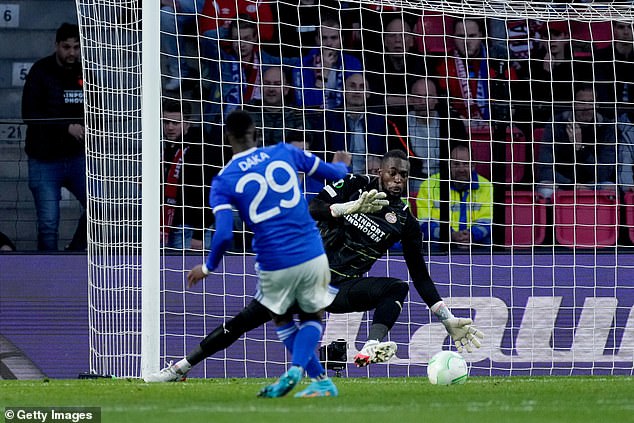 Attempting to play a routine pass to Jonny Evans, Tielemans did not spot Gotze lurking behind him. The German slipped the ball outside him to Zahavi’s, whose angled effort beat Schmeichel and crept into the far corner.

Leicester did not wilt, though. Just after the half-hour, Maddison’s shot clipped Andre Ramalho and looped over Mvogo, forcing Jordan Teze into a remarkable overhead clearance on the goalline. Then Tielemans’ sublime pass picked out the run of Timothy Castagne but the Belgian headed wide from close range. 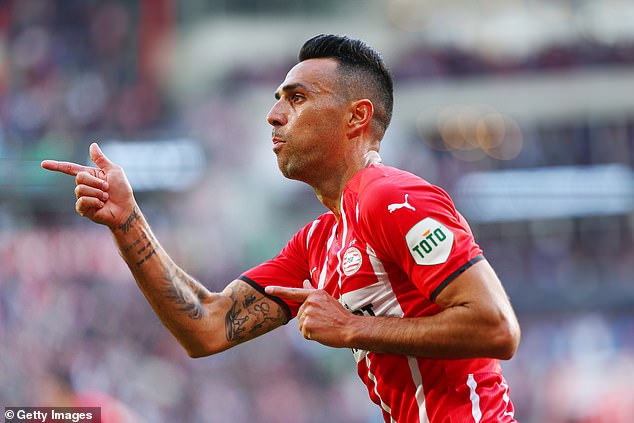 Yet it was PSV who were the first to threaten from another Tielemans mistake. This time Cody Gakpo collected the wayward pass and opted to shoot when he might have released Zahavi. Moments later, Joey Veerman’s low drive from 25 yards clipped Wesley Fofana and flew just wide, then Zahavi headed over after Ramalho had flicked on Gakpo’s corner.

Lookman had made a difference for Leicester on the left and the momentary switch to 4-4-2 brought chances. Daka hared on to a fabulous volleyed pass from Iheanacho and fired inches wide, perhaps put off his stride by Teze’s recovery challenge. Maddison aimed for the corner from the edge of the box and was frustrated to see Mvogo stretch to push it behind.

At this stage, PSV knew another goal would seal the deal and the outstanding Ibrahim Sangare should have provided it. With 17 minutes remaining the midfielder burst into the box and somehow shot over as the home fans howled in pain. 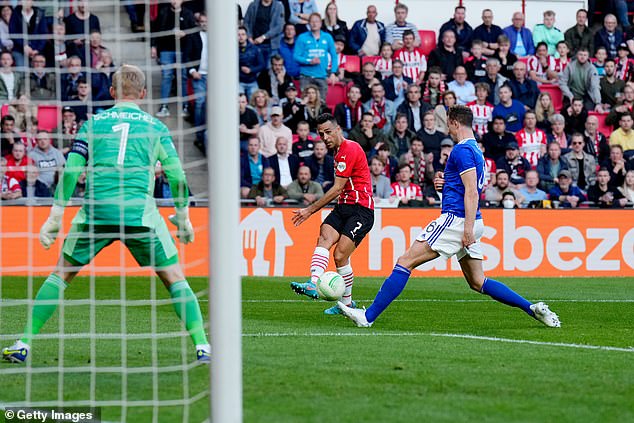 They felt even worse in the 77th minute when Maddison equalised. Subsitute Ayoze Perez – playing for the first time since February – did superbly inside the box, dancing past Ramalho before rolling the ball back for Maddison, who hammered it into the roof of the net from 10 yards.

Unwisely, Maddison put his hand to his ear as he celebrated in front of the PSV supporters, who responded by hurling bottles towards the joyful Leicester players. The restart was then delayed apparently because something else had been thrown on to the pitch near the dugouts.

Leicester were finishing strongly and it required an excellent stop from Mvogo to prevent Perez converting Lookman’s cross at the near post.

Then with three minutes remaining, the Foxes took the lead. Again it was a fine move down the left, with Maddison and Kiernan Dewsbury-Hall combining to free Lookman. Lookman’s cut-back found Daka and though Mvogo parried the shot, it fell perfectly for Pereira to ram it home. 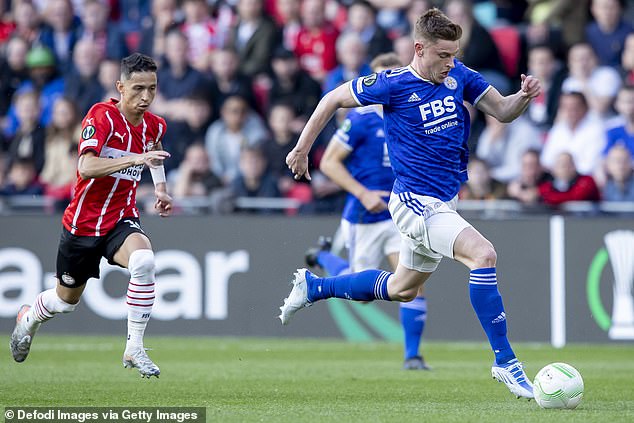 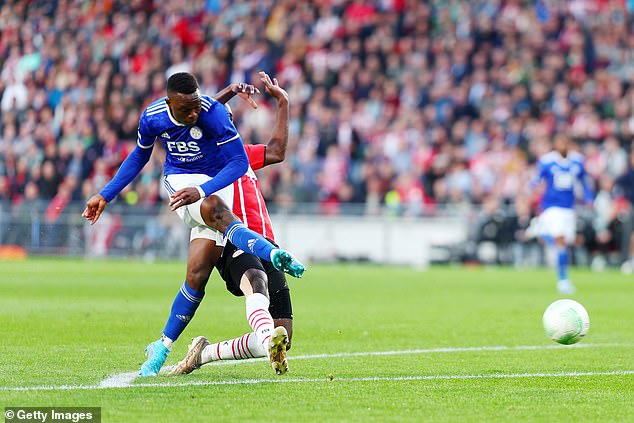