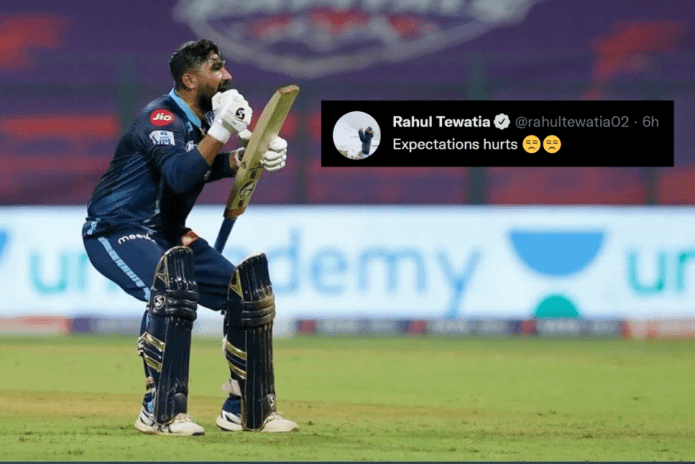 India tour of Ireland – India Squad Ireland TOUR, Rahul Tewatia IGNORED again: Rahul Tewatia was in ominous form in IPL 2022. His ability to finish matches at will got him accolades from Sunil Gavaskar, VVS Laxman, Matthew Hayden. But his SUPER-SHOW in IPL could not get him TICKET to Ireland. The BCCI selectors have again ignored Tewatia and it has left his VERY DISAPPOINTED: Follow Indian Cricket LIVE Updates with InsideSport.IN

The 29-year-old summed up his disappointment shortly. After the BCCI announced the squad on social media, simply writing, “Expectations hurts.”

India Tour of Ireland: Rahul Tripathi over the moon. After getting selected in Indian team for Ireland series, says ‘I got rewarded for my Hard Work…

India Squad Ireland TOUR: On Wednesday, the All India Selection Committee announced India’s squad for the two-match series against Ireland later this month.

With the series set to clash with India’s tour of England, a relatively new-look side was named.

Hardik Pandya is named as captain. IPL stars Rahul Tripathi, Umran Malik and Sanju Samson were all named in the team. Rahul Tewatia though was left heartbroken.

The all-rounder missed out on selection once again. Tewatia, who was bought for Rs 9 crore by Gujarat Titans, played a pivotal role under Hardik Pandya.

The 29-year-old summed up his disappointment shortly after the BCCI announced the squad on social media, simply writing, “Expectations hurts.”

Why Rahul TEWATIA deserved a place? Rahul Tewatia will consider himself hard done by considering how he has knocked on the national team’s doors frequently over the past couple of years.

The left-hander was handed his maiden call-up to the team ahead of the T20I series against England last year. The Haryana man was withdrawn after he failed to clear the yo-yo test.

Playing for the Gujarat Titans, he showed nerves of steel to seal. Tewatia delivered a number of final over chases for the newcomers in their first year in the competition.

While Rahul Tewatia missed out, his namesake Rahul Tripathi earned his maiden call-up to the Indian team for the Ireland series. “It is a very big opportunity, a dream come true (moment) and (I) appreciate (it),” Tripathi told PTI.

Tripathi has been a consistent performer in the IPL over the past few seasons in a variety of roles.

Tewatia’s former Rajasthan Royals teammate Sanju Samson also makes a comeback to the side to be led by Hardik Pandya and coached by VVS Laxman.