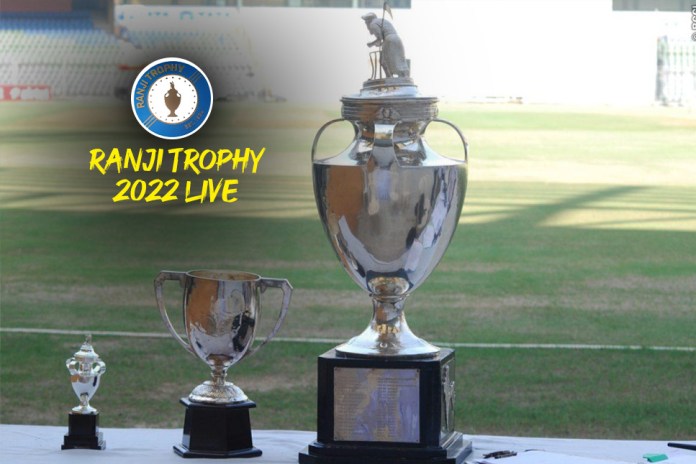 Ranji Trophy 2022 LIVE – 19 Matches Start today: After a long wait for 2 years, Ranji Trophy returns today. On the opening day itself 19 matches will start. With the Covid situation easing in the country, the BCCI decided to conduct the 38-team event in the new normal of bio-secure environments – Follow Ranji Trophy 2022 live updates with InsideSport.IN

Ranji Trophy 2022 LIVE  – Top players in action: The tournament will give a host of domestic cricketers an opportunity to make their name, while giving veterans like Ajinkya Rahane and Cheteshwar Pujara a shot at resurrecting their Test careers.

The fixture between defending champions Saurashtra and record 41-time champions Mumbai in Ahmedabad will generate a lot of interest. With Pujara and Rahane on either side, it will be interesting to see who scores more runs since the Test squad for the Sri Lanka series (at home) is expected to be announced soon.

The Format of Ranji Trophy 2022: The 2021-22 Ranji Trophy will be held in two phases, with the IPL in between. The first phase, which consists of league matches and one
pre-quarterfinal, starts on February 17 and ends on March 15.

Also Read: Ranji Trophy 2022 LIVE: From Ajinkya Rahane to Umesh Yadav, 10 big IPL 2022 stars in the race to get back to form ahead of IPL season

The IPL is expected to start on March 27. Before the Ranji pre-quarterfinal, there will be three rounds of matches held: the first from February 17 to 20, then February 24 to 27, and finally, from March 3 to 6. The second phase, of the knockouts, is likely to begin on May 30 – after the IPL has concluded – and run up to June 26.

Where will the Ranji matches be played? The Elite matches will all be held across eight states, all neutral to the teams in action. Rajkot, Cuttack, Chennai, Ahmedabad, Thiruvananthapuram, Thumba, Delhi, Rohtak, Gurugram, Sultanpur and Guwahati will be the cities where matches will be played. All the Plate matches will be conducted in Kolkata. The venue for the pre-quarter-final and the knockouts will be decided later.

Follow all LIVE Score Updates of Ranji Trophy with InsideSport.IN