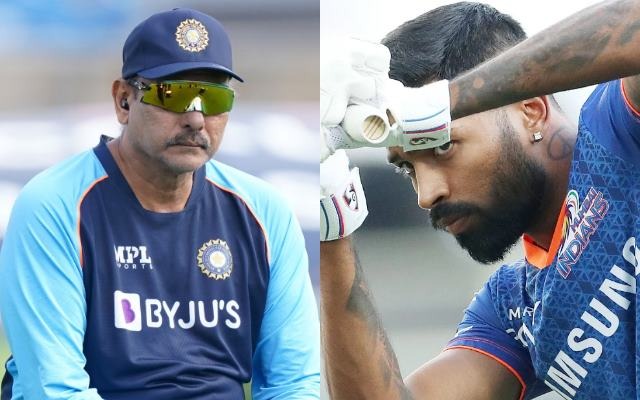 IPL 2022: Ravi Shastri rules of Hardik Pandya as pure batter – Former Indian coach Ravi Shastri has dismissed suggestions that Hardik Pandya could be included as a pure batter for the T20 World Cup later this year in Australia. Pandya was part of the T20 World Cup last year, but injuries meant that he did not bowl much, which saw India opt for other options with Venkatesh Iyer, Deepak Hooda making their debut. Follow IPL 2022 live updates on Insidesport.in.

Former India coach Ravi Shastri feels the team needs a firstchoice all-rounder at number six, ruling out Hardik Pandya’s inclusion as a pure batter in the T20 World Cup in Australia. Hardik has not been able to go full throttle with the ball since returning from surgery to treat an injured back.

With the upcoming T20 World Cup providing India an opportunity to make amends for their league-stage exit in the last edition of the showpiece in the UAE, the team management will be keenly looking at the IPL for players who can fit into the number six slot as an all-rounder and lend more balance to the XI.

“I think the all-rounder’s position at No. 6 for sure. Ideally someone in the top-five who can bowl two or three overs. That takes the pressure off the captain. It gives him then six and a half bowlers from whom he can choose,” Shastri told ESPNcricinfo on Wednesday.

“That will be one area I’ll be looking at very closely. And of course the fast bowling and fielding. I’m not really worried about the batting. Batting is there.”

Hardik Pandya was doing fine until he suffered a stress fracture of the back, and he hasn’t been the same player ever since. Nevertheless, he has been made captain of an IPL team for the first time by Gujarat Titans. However, Shastri still thinks Hardik will now struggle to break into the Indian T20 side as a pure batter because it is already full of power-hitters.

“In the top five, there’s a lot of muscle there. If anyone’s occupying the position Nos. 5, 6 onwards, he’ll have to bring that extra department to the game. That is why from Hardik’s point of view, from India’s point of view, from the Gujarat team’s point of view, it’s extremely important that he strings those two or three overs together because if he does and bowls with even limited success, he becomes an automatic choice in the Indian team.”