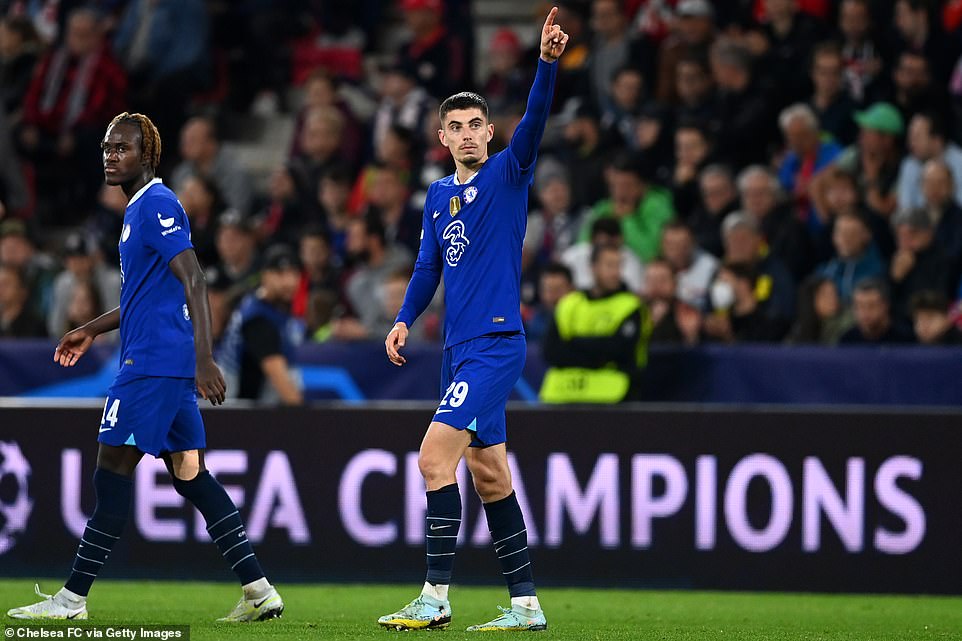 From sampling the Champions League for the first time ever to guiding Chelsea into the knockout stages with a game to spare just over a month later.

For someone who had never even been to a game in Europe’s elite competition before his first match in charge of Chelsea midway through last month, Potter has looked right at home in the Champions League.

Chelsea’s Kai Havertz (above, right) scored a stunning winner to help his side beat Red Bull Salzburg 2-1 on Tuesday evening 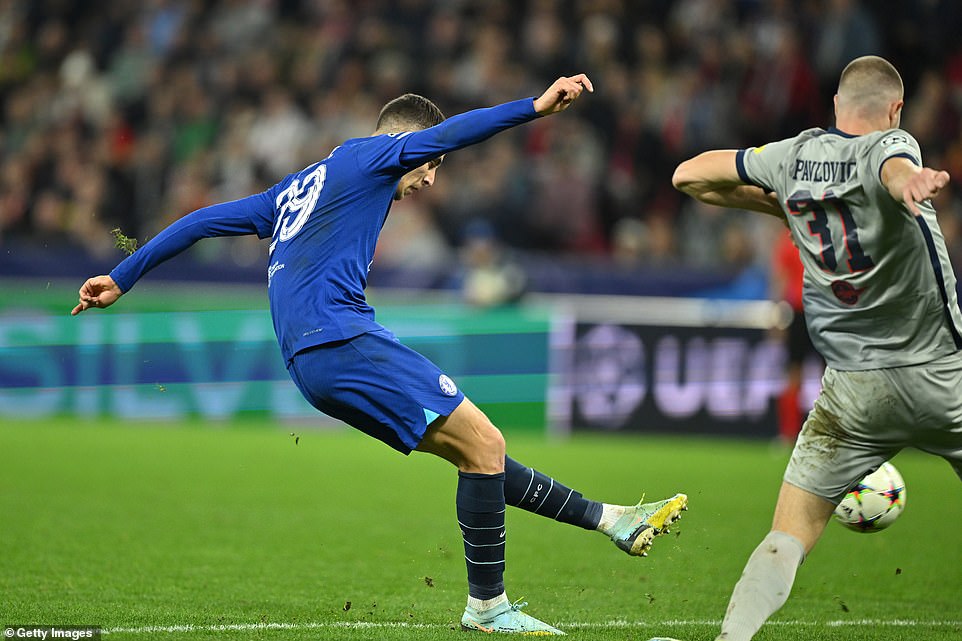 The two victories over European royalty AC Milan were an indication of that and this was another such occasion, just as notable, but for different reasons.

Salzburg may not have the pedigree of Milan but they had the sort of daunting home record – 40 games unbeaten in all competitions – that any of the continent’s big guns would be proud of.

Yet Potter masterminded a Chelsea victory that stood out firstly just for ending it and was further impressive for the varied qualities of Champions League veterans that he inspired his side to show.

And in the second half they had to keep their heads in a raucous atmosphere inside the Red Bull Arena, weather a few mini-storms and match the fired-up hosts to emerge victorious and safely through to the next round.

For that, Potter deserves plaudits. When he took over Chelsea were up against it after losing their Group E opener at Dinamo Zagreb in what turned out to be Thomas Tuchel’s final game.

Their task then got a little tougher when they were held to a Stamford Bridge draw by Salzburg on Potter’s Chelsea dugout debut.

At that stage, it was hard not to wonder how it might reflect on Potter if Chelsea had not made it through.

There is no need to worry about that now thanks to the upturn he has overseen.

‘It’s not easy to win here as you can see from the record they have and the quality of the team. We had to play well and I thought we did. To go through with a game to spare is brilliant considering where we started the competition,’ Potter said.

‘It’s a top competition. Amazing and fantastic to be involved in, a real test against some fantastic teams and a great experience coming to these venues and experiencing an away match in the Champions League. It’s tough and challenging, but I’ve really enjoyed it.’ 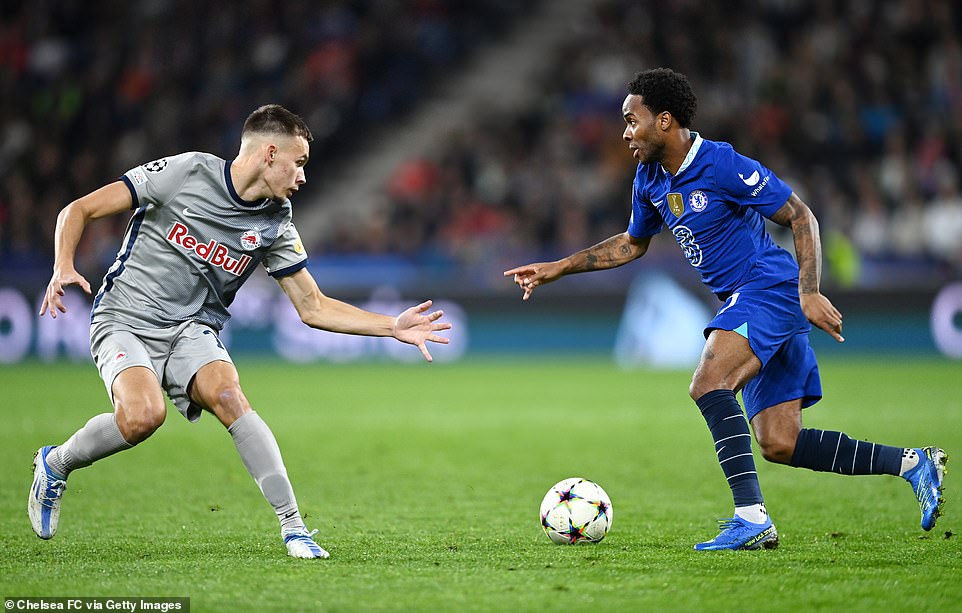 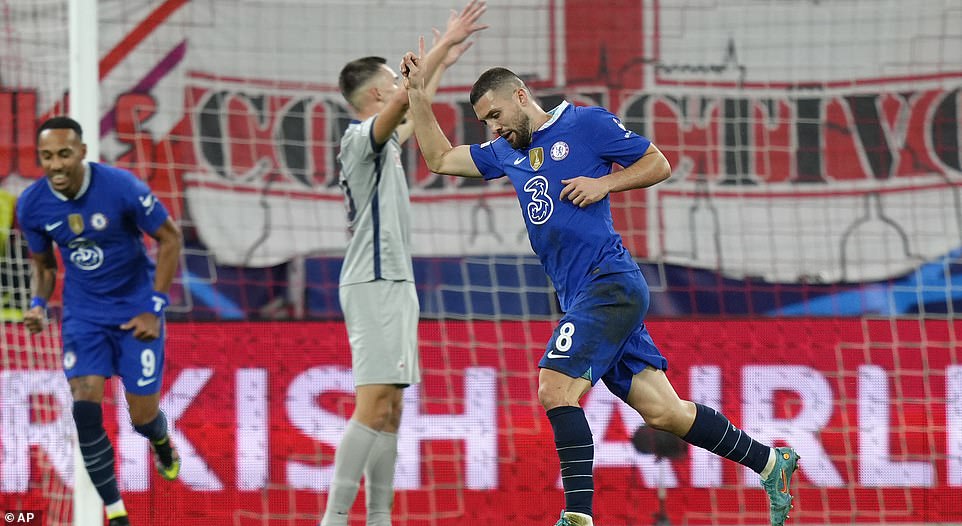 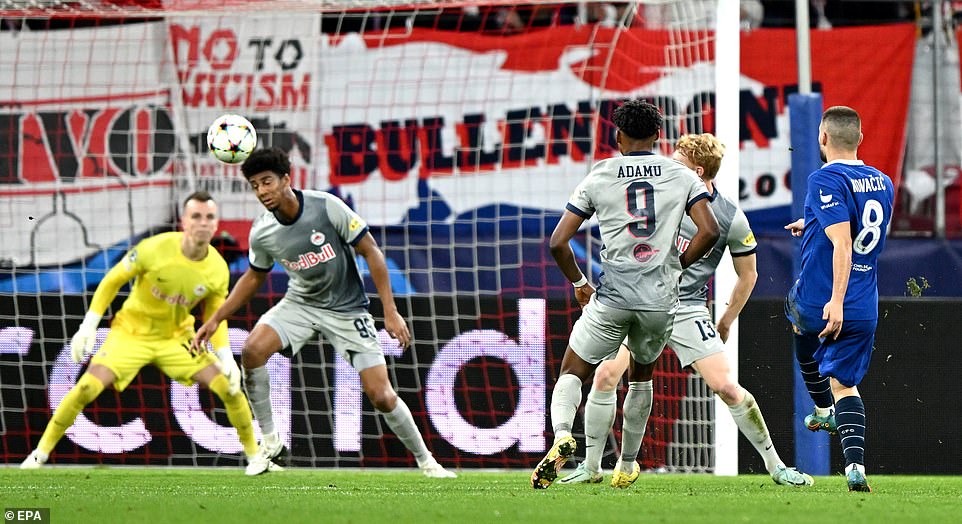 The Austrian-born star reacted well to a Max Wober clearance, steering a first-time left-footed half-volley into the top corner

Mateo Kovacic and Kai Havertz got the two goals which condemned Salzburg to their first home defeat since way back in February last year.

Kovacic’s was a rare one, just his fourth in Chelsea colours. Havertz’s was much-needed, just his third of the season for Chelsea. 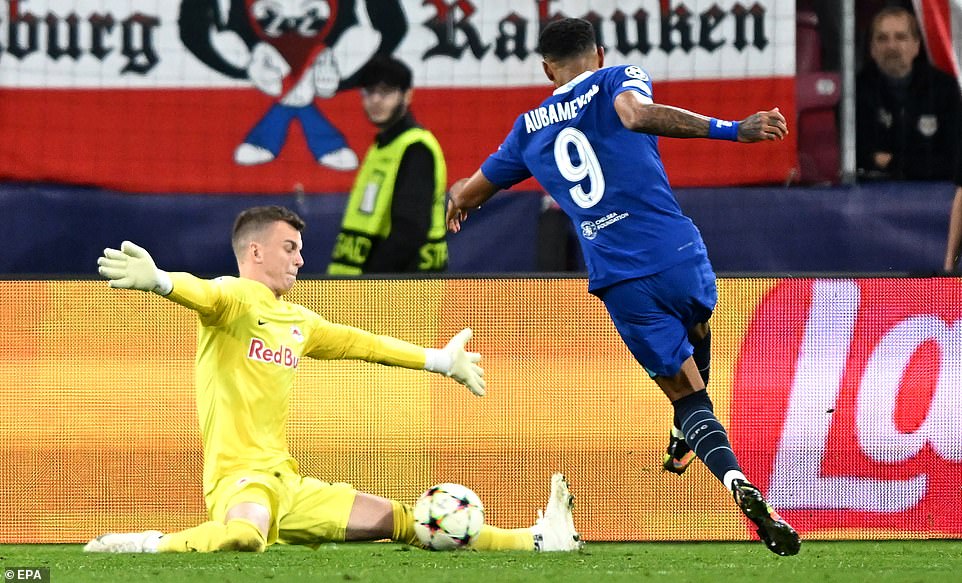 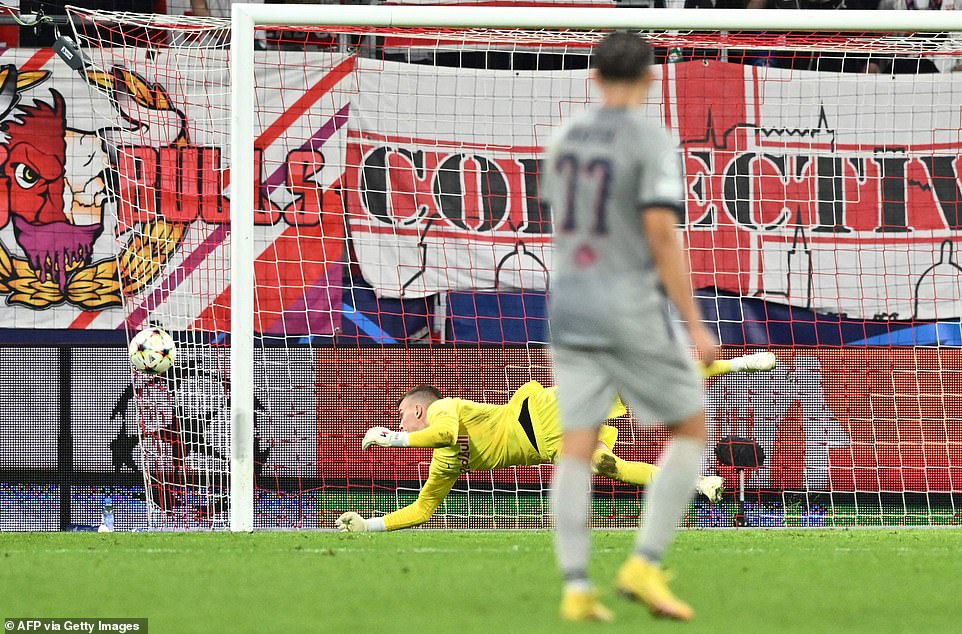 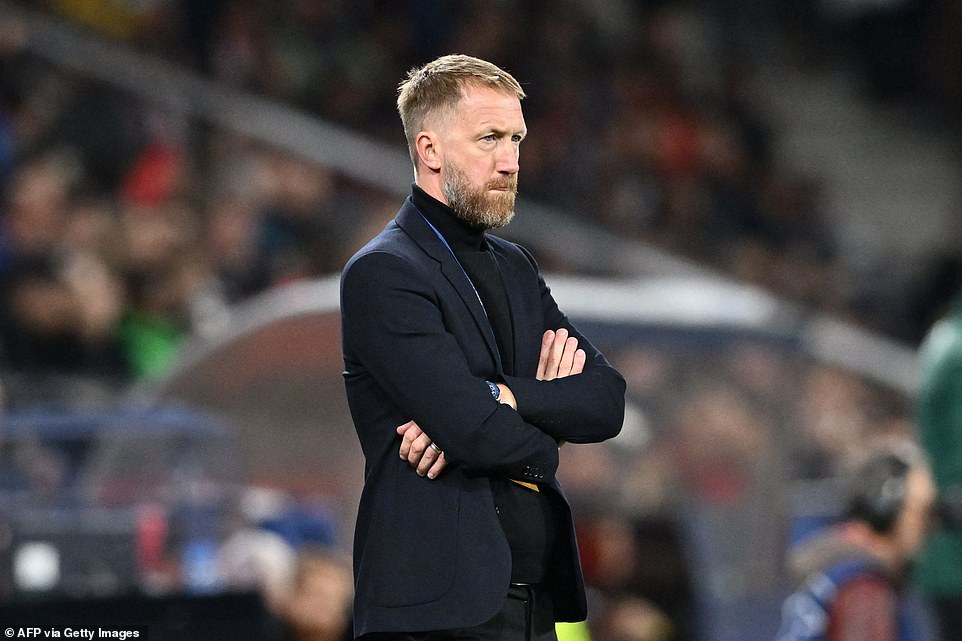 Potter said: ‘His quality is there; he’s an incredibly talented player. He’s been nearly there and obviously, scoring a goal like that is bound to help.

‘I wouldn’t be able to score a goal like that to be fair, I can only imagine! It’s a fantastic strike and an indication of the quality he has.’

Chelsea fully deserved their opener from Kovacic midway through the first-half having answered Potter’s pre-match call for intensity and created a number of chances. 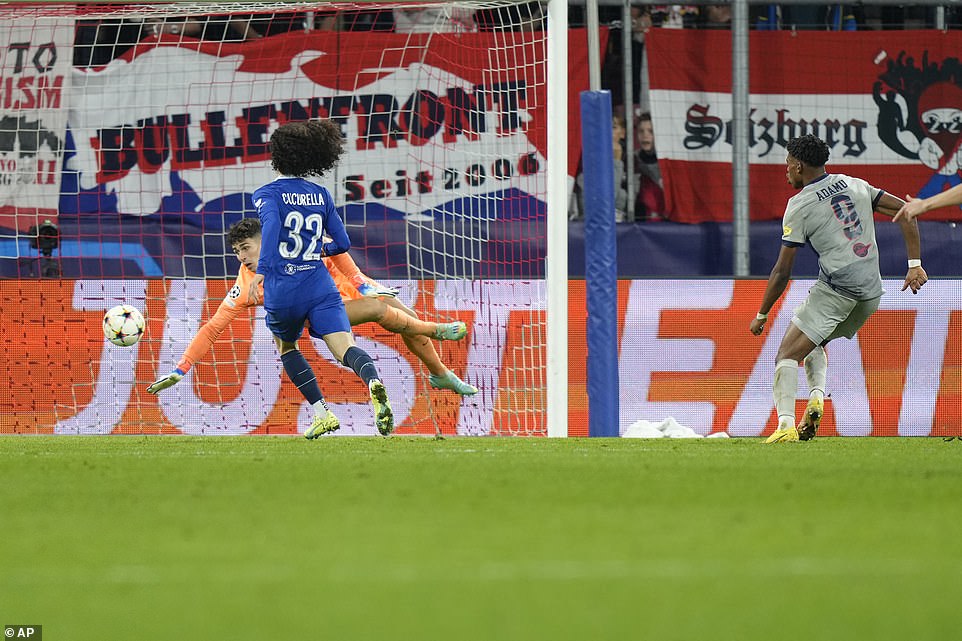 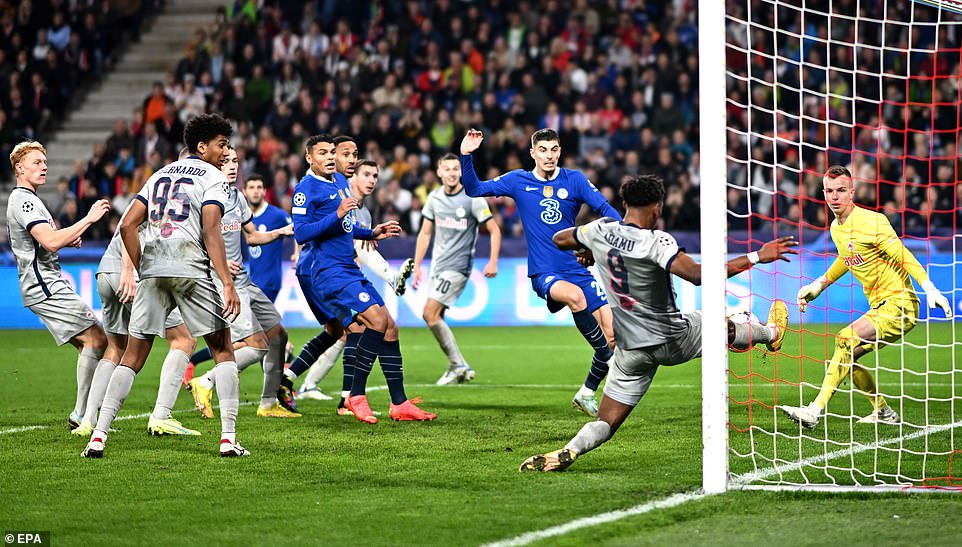 The main concern would have been that their half-time lead was not bigger.

Some of their football was certainly worthy of more, particularly a couple of slick moves that ended with Pierre-Emerick Aubameyang being denied by Kohn who was kept busy throughout.

Salzburg had threatened sporadically but it was not initially obvious why they had been so formidable at home for so long.

Then the second half started. They came out a different side, had an appeal for a penalty ignored and then Maximilian Wober got away down the left and crossed for Junior Adamu to finish first time past Kepa Arrizabalaga.

After Aubameyang, Christian Pulisic and Jorginho threatened in response for Chelsea, Salzburg coach Matthias Jaissle brought on exciting striker Benjamin Sesko whose arrival whipped up the crowd further until Havertz briefly silenced them, bending his brilliant finish past Kohn via the underside of the bar.

Attempts from Sesko and Strahinja Pavlovic underlined that while Salzburg were down, they were not yet out and with Chelsea unable to finish them off they retained hope until the end.

Chelsea though had the ageless Thiago Silva plus Trevoh Chalobah and Kepa who both continued their excellent form under Potter and refused to be beaten a second time.

Missed any of the action? Catch up with Sportsmail’s live blog for Tuesday night’s Champions League clash between RB Salzburg and Chelsea, with coverage from MAX MATHEWS.