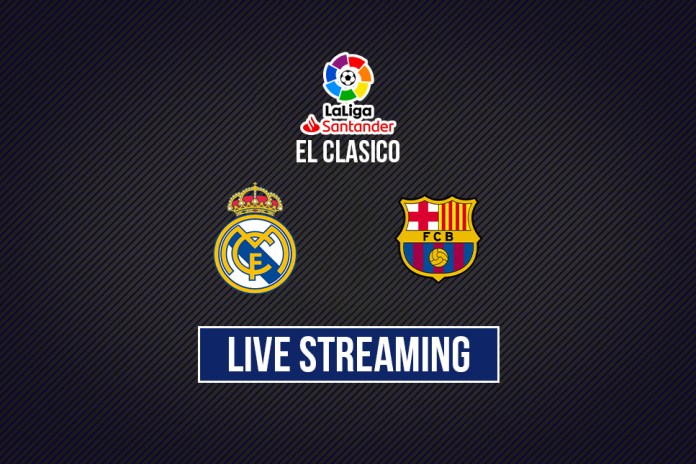 Real Madrid vs Barcelona LIVE: Where to watch EL CLASICO Live Streaming – The Blockbuster match of the La Liga competition is here with League leaders Real Madrid all set to play FC Barcelona in the Matchday 29. The game will be played on Monday, 21st March 2022 at 1:30 AM as per IST. Real Madrid have beaten Barcelona twice this season already but an inform Xavi’s side could turn the tables at the Santiago Bernabeu Stadium. Get all live streaming and live telecast details for the El Clasico. Follow InsideSport.IN for the latest La Liga news and updates.

Real Madrid vs Barcelona LIVE: When and where to watch EL CLASICO Live Streaming in your country? Get Live Telecast details

La Liga have announced the date and time of the final El Clasico of the season as we gear up for the end of the 2021/22 season of the La Liga. Barcelona will travel to the Santiago Bernabeu to take on Real Madrid on March 20th at 21:00 CET which is 21st March 1:30 AM for fans in India in the flagship fixture of matchday 29.

Ancelotti’s Real Madrid has been a dominant force throughout the season! Whereas, Xavi’s Barcelona has newly discovered form & fluidity. Which way will the tie swing?

Real Madrid vs Barcelona LIVE: When and where to watch EL CLASICO Live Streaming in your country?

For Indian fans, the new season of La Liga will be broadcasted on Viacom18’s flagship youth brand channel MTV and OTT platform, Voot Select. The three-year partnership with India’s youngest and leading media conglomerate, which was announced a few months earlier, will bring the premier Spanish football league to fans in the country with a fresh and exciting feel.

El Clasico 2022: What happened in the last El Clasico in La Liga?

Real Madrid beat Barcelona 2-1 in the first Clasico of the 2021/2022 season in front of 86,422 fans at the Camp Nou on Sunday after a sensational strike from defender David Alaba and a late goal from Lucas Vazquez which gave Carlo Ancelotti’s side three points.

Barcelona had controlled possession in the first half but Real were lethal on the counter-attack, taking the lead when Alaba started a flowing move with a tackle and finished it at the other end with a left-footed drive from the edge of the box.

Back when the two sides met Ronald Koeman was still the Barcelona manager as he brought on Philippe Coutinho at halftime while strikers Sergio Aguero and Luuk de Jong were also thrown on in the second half as they searched for an equaliser.

With seven minutes of injury time added on, Real doubled their lead when Marc-Andre ter Stegen saved a shot from Marco Asensio from another counter-attack but Vazquez pounced on the rebound to score.

Barca got a goal back in the 97th minute when Sergino Dest crossed to Aguero in the six-yard box and the Argentine tapped in but it proved to be a consolation goal as Real moved provisionally top of LaLiga with 20 points. Barcelona were five points behind in eighth place.

Real Madrid vs Barcelona LIVE: When and where to watch EL CLASICO Live Streaming in your country? Get Live Telecast details