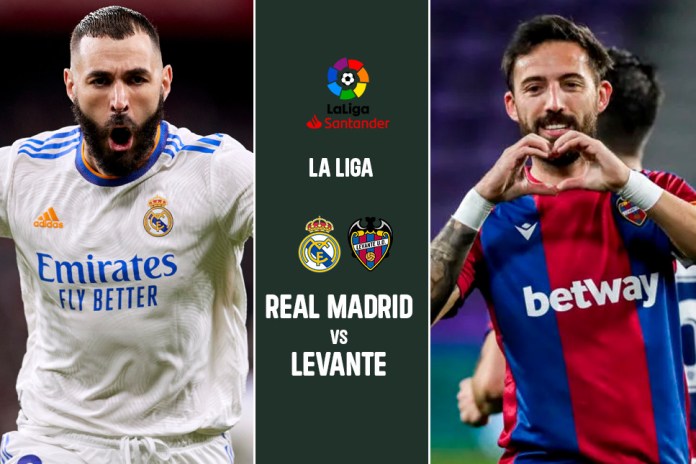 Real Madrid vs Levante LIVE: La Liga Live streaming – Champions Real Madrid will be bidding to return to winning ways in Spain’s top flight when they welcome relegation-threatened Levante to Bernabeu. Real Madrid suffered a 1-0 defeat to rivals Atletico Madrid in the Madrid derby at the weekend, while Levante will enter the match off the back of a 2-1 win over Real Sociedad. Follow InsideSport.IN for more updates

Real Madrid have welcomed Eden Hazard back into first-team training following a leg operation, but the Belgium international will again be unavailable for selection here.

Marcelo, Dani Ceballos, Isco, Gareth Bale and David Alaba all missed out against Atletico at the weekend and are still absent here, while Dani Carvajal (rest) and Marco Asensio (ankle) are also unavailable.

Head coach Ancelotti is expected to recall a number of key players to his starting side, though, with Federico Valverde, Vinicius Junior, Luka Modric, Ferland Mendy, Thibaut Courtois and Karim Benzema all in line to feature in the first XI.

Toni Kroos could potentially have a rest from the start, but Rodrygo might keep his spot as part of a front three alongside the returning Benzema and Vinicius, who both impressed in the semi-final Champions League success over Man City last week.

The visitors did not pick up any fresh concerns against Real Sociedad last time out, but there could be a change in midfield, with Melero potentially coming in for Jose Campana.

Dani Gomez and Jose Luis Morales are set to continue as the front two in a 5-3-2 formation, with Jorge Miramon and Son featuring as the wing-backs for the relegation-threatened outfit.

Real Madrid vs Levante LIVE: When, Where, How to watch the live streaming of La Liga matches?

When will Real Madrid vs Levante be played? – Date

Real Madrid vs Levante will be played on 13th May 2022

What time will Real Madrid vs Levante be played? Time
RMA vs LEV match will kick-off at 1:00 AM IST

Where will Real Madrid vs Levante be played? – Venue
RMA vs LEV will be played at the Estadio Santiago Bernabeu

Who will be the Match Official for Real Madrid vs Levante? Referee

Adrian Cordero will be the referee for the game