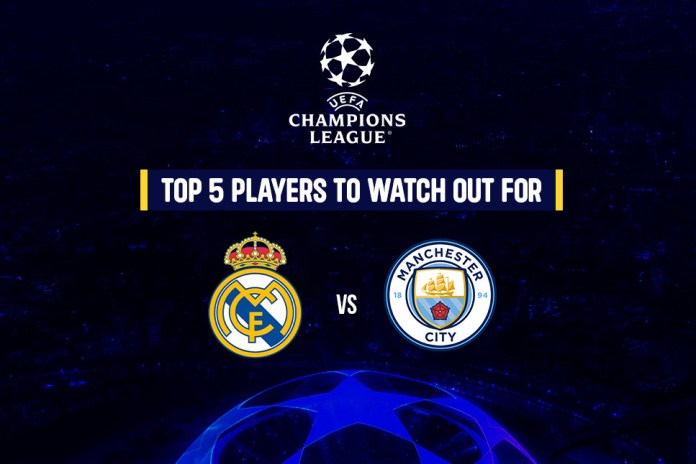 Champions League Semi-Finals 2021/22: Real Madrid vs Man City: Top 5 players to watch out for – Manchester City will travel to Madrid in order to kill the semi-final clash at the Santiago Bernabeu. We take a look at the top 5 players to watch out for, who could prove to be the difference in this mouth-watering UCL semi-final clash. Follow InsideSport.IN for more updates on Sports.

The 2018 Ballon d’Or winner has been the most joyful player to watch in a Real Madrid shirt. The Croatian playmaker Luka Modric who helped Madrid with some big performances against giant teams such as PSG and Chelsea by controlling the midfield was lauded for his heroics.

Despite a 4-3 loss against Man City at the Etihad, the Croatian didn’t have his best of his games against the Cityzens but with Casemiro back in midfield and a roaring Bernabeu his will be eager to help his team turnaround the tie.

With Man City playing a high defensive line, the Croatian can play out inch perfect through balls to Vinicius Jr. or Benzema to unlock the Man City defence at the Etihad.

The 21-year-old England midfielder has proven to be an important asset for Pep Guardiola in the big games and he will surely play a part against the European giants Real Madrid. Phil Foden has played several positions under Pep including as a right-winger, centre-forward and centre-midfielder.

Phil Foden has been involved in 21 goals so far across all competitions for Man City with 2 of his assists and goals coming in the Champions League. The English star is set to play against Madrid in a centre-forward position as he looks to trouble the likes of Eder Militao and David Alaba with his dribbling abilities and knack for getting on the ball.

Karim Benzema became the top scorer of the 2021/22 Champions League season with 14 goals after his brace at the Etihad. But he needs either 1 goal or assist to top the Goal+Assist charts.

He will once again prove crucial at home as Real Madrid look to overturn a 1 goal deficit at the Santiago Bernabeu after winning their 35th La Liga trophy at the weekend.

Benzema has scored 37 goals for Real Madrid this season with 25 of his goals coming in the La Liga competition. The likes of Ruben Dias, Laporte and John Stones will have to closely monitor the French striker in order to control the tie.

Kevin De Bruyne once again stepped up with a crucial goal for his team having scored against the Madridsta side in the 1st Leg. He also managed to assist Gabriel Jesus’ second goal.

The Belgian playmaker has been influential for the Cityzens with his long range shooting abilities but most importantly being the playmaker of the team. He is Pep Guardiola’s most prized along with Joao Cancelo.

Kevin De Bruyne has amassed 27 goal contributions this season across all competitions, but he provides more than just assists and goals, he can produce huge game changing moments with his feet and therefore the Real Madrid midfield will definitely have to keep their eyes on the Belgian.

Besides Valverde, another youngster in Vinicius Junior also displayed his box of tricks in the 1st Leg. The Brazilian winger nutmegged his countryman Fernandinho in style and then made the move count as he scored Real Madrid’s second goal of the night. His strike left Manchester City manager Pep Guardiola in awe, as he couldn’t believe what he saw.

Still only aged 21-years-old, Vinicius Jr. has dominated the left flank for Real Madrid with his sumptuous dribbling but most importantly his partnership with Karim Benzema has played a part in Madrid’s success across all competitions.

Vinicius Jr. has been involved in 32 goals so far this season but his ability to dribble past defenders with ease and win fouls in the opposition half with his tricky feat has helped them collectively.