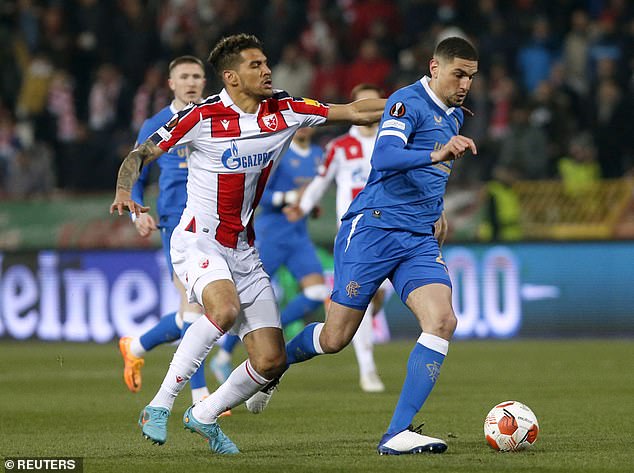 By the end of a cacophonous night in this intensely intimidating arena, Rangers were able to quietly savour a real sense of satisfaction.

A major test of their mettle had been passed. Securing the club’s first European quarter-final in 14 years was never going to be straightforward. Not here. Not even with a 3-0 first leg lead.

For a while, it looked as though they might wobble. A goal down inside ten minutes, the volume inside the Marakana was turned up to the max. 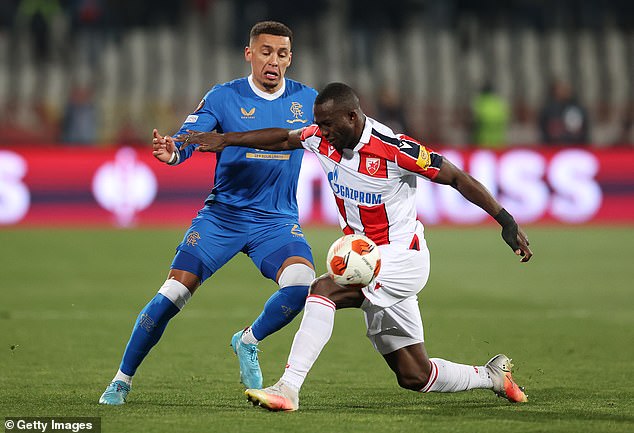 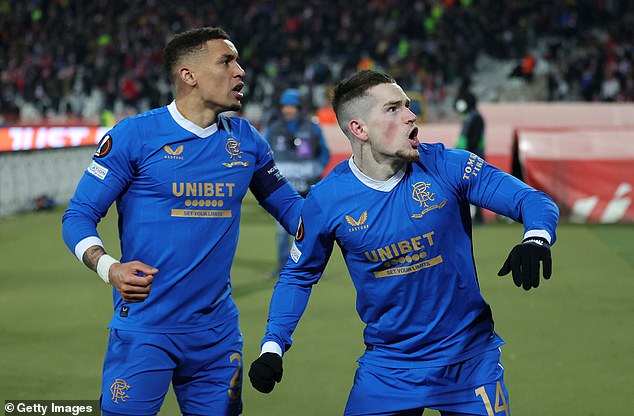 Ryan Kent (pictured, right) levelled the score with his strike in the 56th minute of play

Allan McGregor formed a one-man barricade to deny Red Star with a series of excellent saves.

A veteran of Rangers’ last visit here in 2007, the 40-year-old goalkeeper continues to defy his age. McGregor was the central figure in ensuring a place in tomorrow’s draw was attained with something to spare.

The deal was then sealed at the other end of the pitch. Racing forward on a 70-yard break, Ryan Kent’s 56th minute strike turned the lights out on Red Star. The chants kept coming.

The noise level remained high. But the hosts’ belief in a footballing miracle had vanished.

A stoppage time penalty from El Fardou Ben Nabouhane supplied the minor consolation of victory on the night. 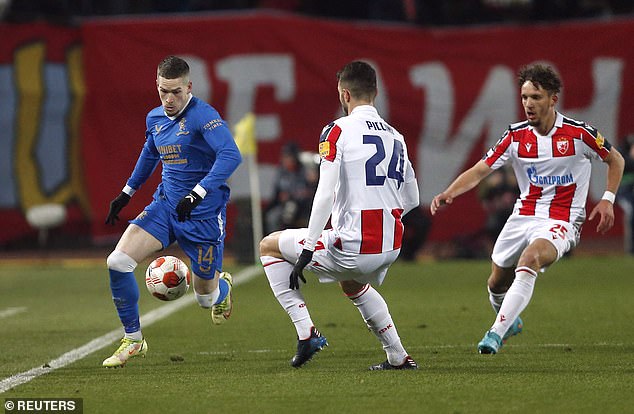 Kent’s goal in the 56th minute turned the light out on Red Star, but they struck in added time

Rangers have now broken the glass ceiling in the Europa League. After reaching the last 16 in the previous two seasons, going one step further is an excellent achievement worthy of real praise. Dreams of replicating 2008 remain very much alive.

The two legs of the quarter-final will be added to epic April schedule for Giovanni van Bronckhorst and his players.

Next month will determine whether the Dutchman’s first season in charge could become a special one.

His counterpart, Dejan Stankovic, had promised Red Star would be twice as good in front of their own fans. He wasn’t far wrong.

The first half put sweat on the brows of all associated with Rangers. But the experience and durability fashioned over their sustained continental exploits came to the fore. No team left in this competition will particularly fancy a trip to Ibrox. 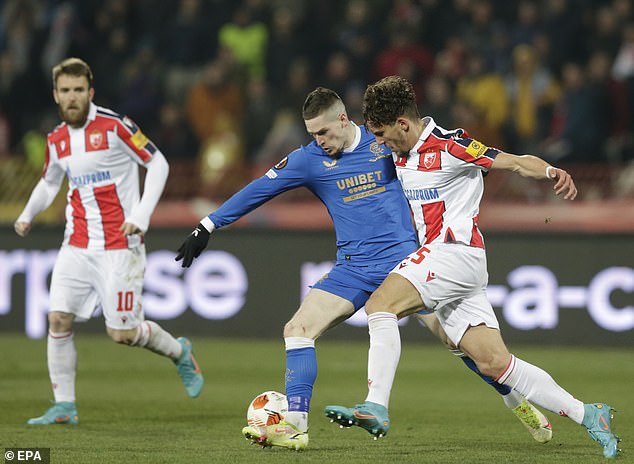 First, though, Rangers must return to domestic business and a Premiership visit to Dens Park on Sunday. It’s safe to say the atmosphere will be a little different.

The video screen in the Marakana may have declared ‘welcome, dear guests’ but this place was anything but hospitable.

Already half-full an hour ahead of kick-off, ear-piercing whistles greeted Van Bronckhorst’s players when they stepped out for their warm-up. A tone was set.

The Ibrox manager went with the exact same line-up as the first leg, with John Lundstram’s return to fitness ensuring there could be tactical flexibility. Lundstram was also one of three selected who successfully walked a suspension tightrope.

Despite the very healthy advantage from last week, this remained a full throttle challenge. Red Star believed in their chances of an historic comeback. So, too, did their paying public. 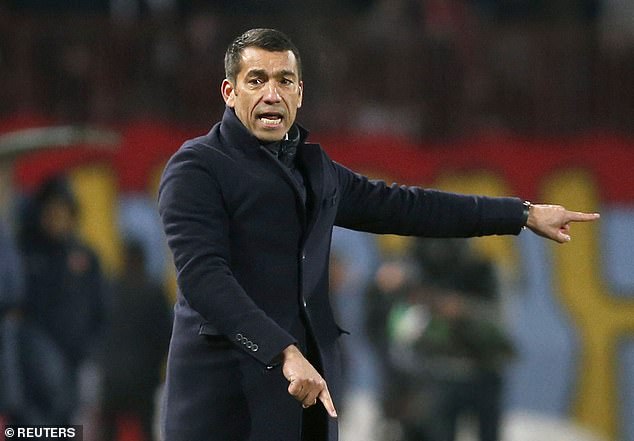 That hope further bloomed just ten minutes into the match. From a Rangers perspective, it was an awful goal to lose.

Aleksandar Katai took a corner short to Guelor Kanga, who delivered a cross into the area. The threat simply wasn’t dealt with. Alfredo Morelos completely missed a chance to clear and Ivanic slammed the ball into the net.

The stadium erupted with renewed noise. Rangers were on the ropes. And they nearly conceded again two minutes later.

Katai, such a creative danger for the hosts, drifted forward before sliding a through ball into the path of Ivanic.

The Montenegrin connected well with an angled strike but McGregor got down with a strong left hand to turn it behind for a corner. This time, the set-piece was repelled but a warning had well and truly been served. Red Star were intent on shining.

In contrast, the Ibrox outfit had shed some of their composure. The basics weren’t being done properly. Morelos embodied the difficulties. Little went right for the Colombian striker in these testing early exchanges.

A golden chance for a breakaway strike was wasted when his poor pass towards Kent was picked off by a defender. Red Star surged upfield.

Ohi Omoijuanfo peeled away to the far post to meet a deep cross but his header lacked sufficient power to truly trouble McGregor.

The Serbians’ need for goals was always going to give Rangers space to attack. Maximising those opportunities was key to quelling the mounting home optimism.

Morelos came close in a more positive contribution after cutting in front the right, dragging his shot narrowly wide of the far post.

Red Star still looked the more likely, though. Milan Pavkov, who scored twice in a 2018 win over Liverpool, choked a prime chance by miscuing his shot from 15 yards.

Then a slick passing move led to Katai standing up a dangerous cross that Connor Goldson had to head behind.

You know things are fraying when Ryan Jack is having his pocket picked just outside the penalty area.

Italian right-back Cristiano Piccini robbed him of possession before curling in a fine attempt that drew an even better save from McGregor. 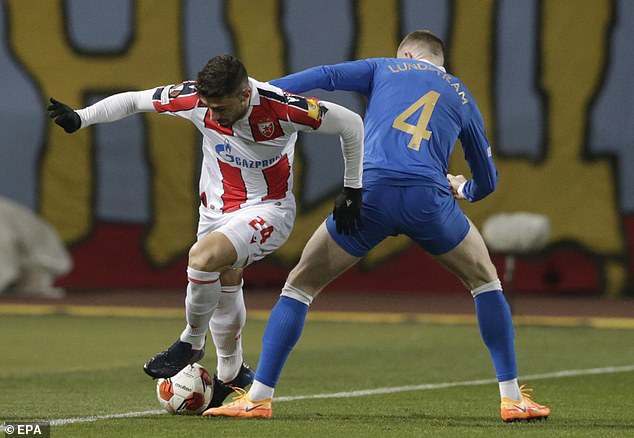 The goalkeeper was crucial to Rangers reaching the break with just a solitary concession.

There were unwelcome scenes off the park during the interval. Objects, including broken seats, were thrown back and forth between Rangers fans and the home support.

A sizeable police presence moved into the visiting section and formed a line at the perimeter fence to prevent any further incidents.

It didn’t long after the restart for McGregor to be drawn into action once more. A near-post flick from a corner led to another excellent stop.

Red Star looked to build more momentum. Omoijuanfo got in behind Calvin Bassey but the left-back did well to recover and knock the Norwegian out of his stride.

A second bite of the cherry was spurned when Omoijuanfo was unable to find the unmarked Ivanic.

Rangers needed something to relieve the tension. It arrived on 56 minutes with Kent’s latest crucial contribution to this Europa League.

A break down the left saw him exchange passes with Glen Kamara before haring into the box. He opted to on his own with an attempt that nicked off Aleksandar Dragovic to beat goalkeeper Milan Borjan.

Kent hurdled the advertising boards to take the acclaim on the Rangers support. The significance of the moment was huge. Red Star were deflated.

Piccini also had to go off after appearing to tweak his hamstring when forlornly chasing Kent.

McGregor shovelled out a Kanga shot, denying Sekou on the follow-up, before Van Bronckhorst began to make substitutions. One of those introduced, Kemar Roofe, saw a drive saved by Borjan.

Kamara then conceded a penalty as the game entered six minutes of added time. Ben Nabouhane converted but it no longer mattered.