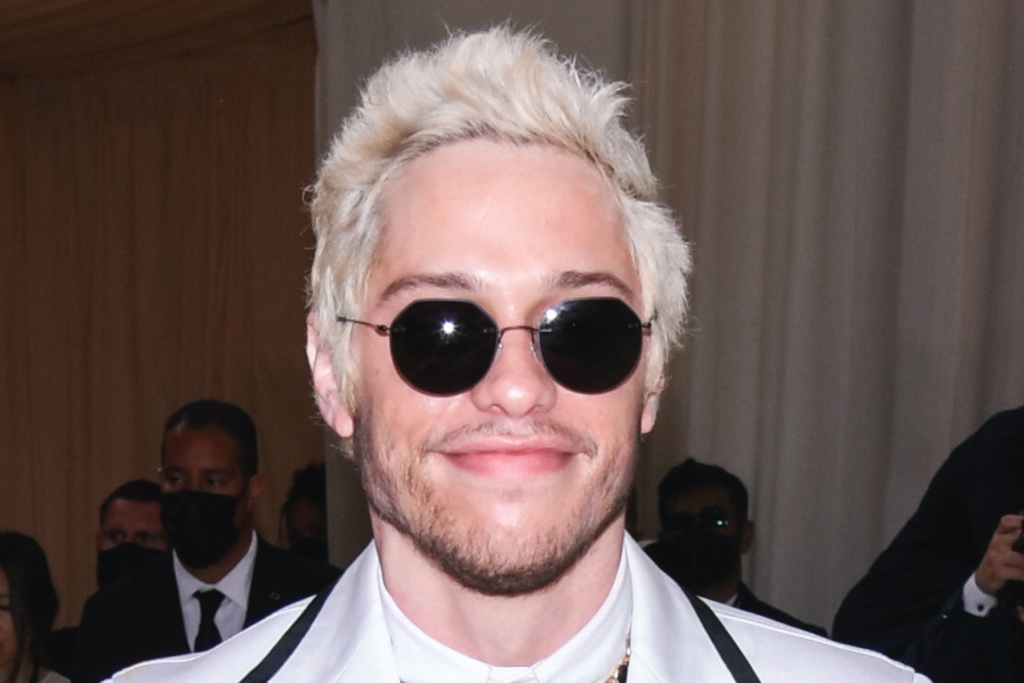 As rumors swirl around the 2022 Met Gala — now less than two weeks away — it’s time to reminisce on looks from the 2021 event. Currently at top of mind — particularly as the look’s designer Thom Browne’s Fall 2022 show approaches — is Pete Davidson.

Last September, the 2021 Met Gala — which raises funds annually for the Metropolitan Museum of Art — saw an explosion of experimental suiting. Among the Thom Browne-clad army of bespoke skirted men, including Lee Pace and Evan Mock, was Davidson. The “Saturday Night Live” star was sharply dressed by Browne in a black tunic dress, layered atop a classic white collared shirt. Giving the look a dose of chic was a white blazer with black piping, plus layered bracelets, jeweled and pearl necklaces and a set of black sunglasses.

Davidson’s footwear was equally sharp: a set of black leather lace-up wingtip boots over matching calf-high socks, each punctuated with Browne’s signature white four-bar logo. The set added a graphic punch to finish the actor’s look, while remaining sharp and grungy. Davidson even described his ensemble as channeling a “sexy nun” while speaking to Vogue. The star’s Met Gala debut outfit was certainly subversive, but also showed a shift in classic men’s suiting that’s been occurring on the red carpet in recent months — with Brown leading the charge, dressing stars like Oscar Isaac and Dan Levy in matching pleated skirts and blazers.

It’s currently unclear if Davidson will attend the 2022 Met Gala, though he was included in a rumored guest list leaked this week by celebrity gossip Instagram account Deuxmoi. Other unconfirmed stars on the list included Davidson’s girlfriend Kim Kardashian and close friends Machine Gun Kelly and Megan Fox — plus a slew of celebrities like Harry Styles, Taylor Swift, Justin and Hailey Bieber, Tracee Ellis Ross and Olivia Rodrigo. However, Vogue did announce that its 2022 Met Gala Red Carpet livestream will be hosted by Vogue editor-at-large Hamish Bowles, Vanessa Hudgens and La La Anthony — confirming at least three attendees in addition to the Gala hosts.

What potential attendees wear remains to be seen. This year’s dress code, “Gilded glamour,” will be strictly white tie and themed around the Gilded Age of the late 1800s — where opulence and glamour reigned supreme during America’s entrance into the 20th century. However, as Met Gala themes have often remained open to fashion interpretation, it would be no surprise if it was full of a heavy dose of metallics and high shine.

The May 2 event at the Metropolitan Museum of Art will be co-chaired by Blake Lively and Ryan Reynolds, as well as Regina King and Lin-Manuel Miranda. Celebrating the Costume Institute’s “In America: An Anthology of Fashion” exhibit, the Gala will include Vogue’s editor-in-chief Anna Wintour, fashion designer Tom Ford and head of Instagram Adam Mosseri as honorary co-chairs. Additional event support will be provided by Instagram and Condé Nast.

The 2022 Met Gala’s theme is “In America: An Anthology of Fashion,” exploring the foundations of American fashion — specifically, identifiers of American style and individual designers. The exhibit will include 100 garments by independent designers and dressmakers from the 1800s to the mid-late 1900s in the Museum’s American Wing period rooms. There will also be “freeze frames” of film vignettes in each room, highlighting the aesthetics of eight different film directors: Janicza Bravo, Sofia Coppola, Julie Dash, Tom Ford, Regina King, Martin Scorsese, Autumn de Wilde and Chloé Zhao.

Discover Davidson’s grungy style over the years in the gallery.