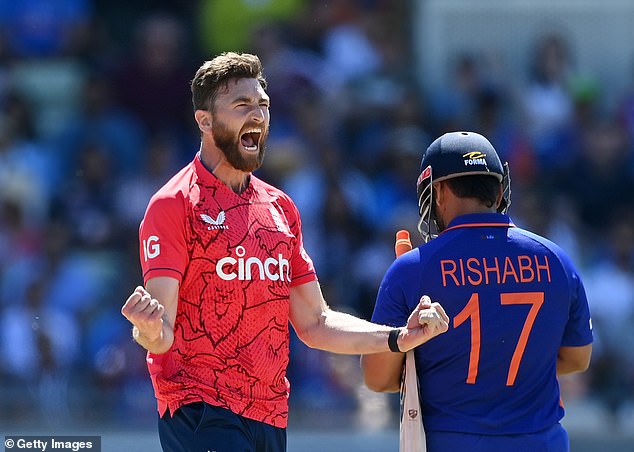 Richard Gleeson enjoyed a dream England debut as he claimed three huge scalps to help the hosts restrict India to 170-8 in the second T20 international at Edgbaston.

Gleeson removed captain Rohit Sharma in his first over before snaring Virat Kohli and the dangerous Rishabh Pant in consecutive balls.

The Lancashire bowler finished with remarkable figures of 3-15, while Chris Jordan impressed for the second match in a row as he took 4-27.

A late flurry from Ravindra Jadeja ensured India, who led the three-match series, posted a reasonable total at a ground where their Test team succumbed to a devastating seven-wicket defeat to England earlier this week.

England struggled in the first game of the series but will fancy their chances of chasing down 171 in ideal conditions at Edgbaston.

India, who won the opening game in Southampton by 50 runs after making one short of 200, made a promising start as openers Sharma and Pant motored along early on.

But the introduction of Gleeson, playing his first T20 international at the age of 34, swung the match back in England’s favour.

Gleeson got a short ball to climb on Sharma, who skied a shot that was well caught by new England captain Jos Buttler for 31.

The Lancashire seamer was brought back into the attack and it paid dividends almost immediately. Kohli swung hard at a Gleeson delivery and could only watch as the ball was superbly taken by Dawid Malan in the deep.

Gleeson then enticed Pant into coming down the pitch and the Indian star’s attempted hook found the grateful gloves of Buttler behind the stumps for 26.

Jordan also played a starring role with the ball and, like Gleeson, took two wickets in two balls as he sent Suryakumar Yadav and Hardik Pandya packing to leave India struggling at 89-5.

The tourists were pushed up to a competitive score by Jadeja, who finished unbeaten on 46 despite slowly running out of support at the other end.