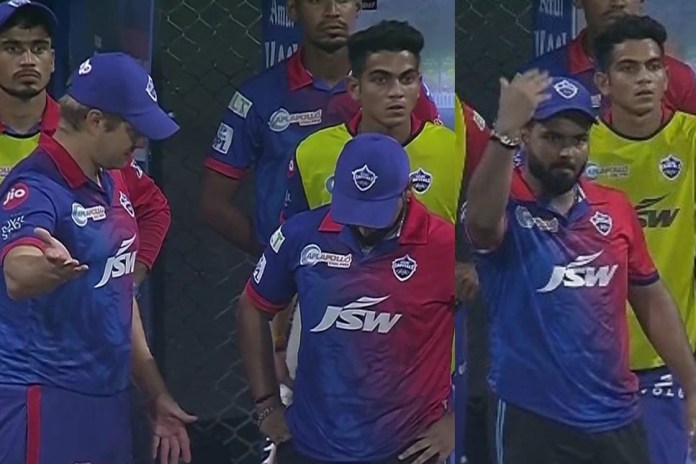 IPL 2022: Rishabh Pant calls back players after DISAGREEMENT with UMPIRE – In one of the most bizarre incidents to have taken place in the Indian Premier League aka IPL, Delhi Capitals skipper Rishabh Pant went on to display an outrageous decision of asking his batter Rovman Powell to return from the crease. These scenes took place in the last over of the game against Rajasthan Royals when the conflict arose over an alleged no-ball that was not given by the umpire. Follow RR vs DC Live Updates on InsideSport.IN

The incident took place in the last over of the game, as Delhi Capitals needed 36 runs to win from the last 6 deliveries. Hard hitter Rovman Powell smacked 3 back-to-back sixes off the first three deliveries and ignited hope in the DC camp of pulling off an astounding victory. However, the third delivery which went for a six was a full toss delivery by Obed McCoy which was targetted at the body of Powell and thus was assumed to be a no-ball by the Dc camp.

Trouble broke out when the umpire decided not to signal it a no-ball. The entire DC camp started to fume. On the rare occasion of a rush of blood to the head, skipper Rishabh Pant decided to bring his batters back to the dugout. Pravin Amre came on to the field to have a word with the umpire while Shane Watson was seen calming down an infuriated Pant. These certainly are bizarre scenes that have occurred rarely in cricket.

Previously in 2020, captain cool MS Dhoni too was seen losing his cool as he went on to the pitch to discuss with the umpires after a no-ball decision was reversed by the on-field umpire. This incident took place in a game of CSK vs Rajasthan Royals.

“I think they were bowling well throughout the game but in the end Powell gave us a chance, I thought that no-ball could have been precious for us but it is not in my control. Yes, disappointed but can’t do much about it. Everyone was frustrated (in the dugout) that it was not even close, everyone in the ground saw that, I think the third umpire should have interfered and said it was a no-ball,” said Pant.

“Obviously it wasn’t right (sending Amre onto the field) but what happened with us is also not right, it happened in the heat of the moment. It was the fault from both sides and it is disappointing as we have seen some good umpiring in the tournament. It is disappointing to go so close especially when the other team has scored 200+,” he added.