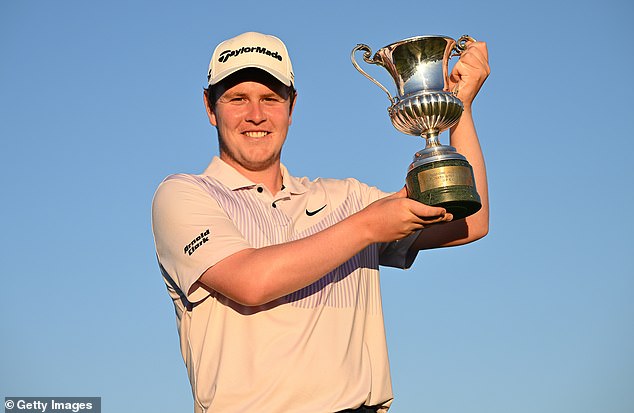 By Raith Al-samarrai For The Daily Mail

Barely a year out from the Ryder Cup in Rome, Robert MacIntyre overpowered both the Marco Simone course and a number of Europe’s top golfers to win the Italian Open on Sunday. That’s a pretty handy audition, all things considered.

With the European captain Luke Donald in attendance, the Scot shot the lowest round of the week with a 64, and when that wasn’t enough for an outright victory, he then demonstrated the temperament to beat Matt Fitzpatrick on the first play-off hole.

It was only his second DP World Tour title, and his first since 2020, so it was an opportune moment for the 26-year-old to offer a reminder of the considerable talents that almost earned him selection for Europe in 2021.

‘It (the Ryder Cup) is my goal for the next year and I’ve won on this golf course,’ said MacIntyre, who finished on 14 under with Fitzpatrick, one ahead of Victor Perez and two beyond fourth-placed Rory McIlroy.

‘We are well away from the Ryder Cup obviously, but I might as well say it, it’s my No 1 priority. I was close last time and it didn’t work out. But this is what I want. I think I’ve made a good start.’

MacIntyre’s win represents a heartening revival after a disappointing nine-month stretch, in which he fell from 60th in the world to 110. Against that slump, it is encouraging that he is beginning to closer resemble again the fine player who has twice finished in the top eight at The Open.

Starting his final round three behind Fitzpatrick, MacIntyre was near-perfect in his handling of the course where the Cup will be staged. While his driving kept him away from the worst dangers, with the Europeans hoping penal rough will strike inhibition into the American big hitters, MacIntyre truly excelled on his second shots with irons in hand. Reaching the turn in 29, MacIntyre had only required nine putts in collecting six birdies across nine holes – the accuracy of his approaches was immense. 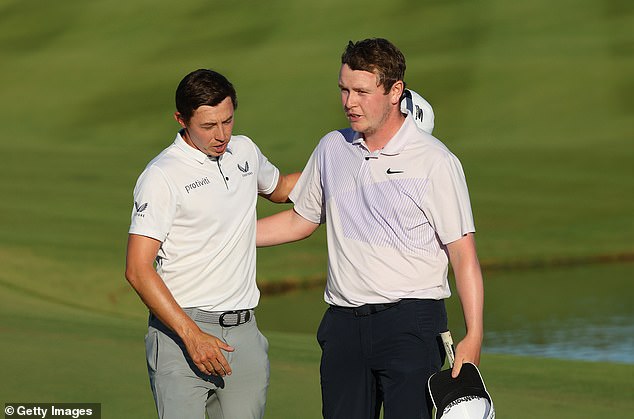 A further two birdies at 12 and 13 followed a bogey at 10, with the Scot now in the lead and Fitzpatrick waiting for a spark after parring all nine on the front. That arrived for the US Open champion with his first birdie at 11 and he then eagled the par-five 12th after hitting the flag with what would have been a 215-yard albatross.

That tied him with MacIntyre at 13 under, with each man eventually meandering to 14 under for a play-off.

A drive into the left-hand rough by Fitzpatrick on a repeat of the 18th ultimately proved decisive in favour of MacIntyre, whose 11th birdie in 19 holes gave him the win. 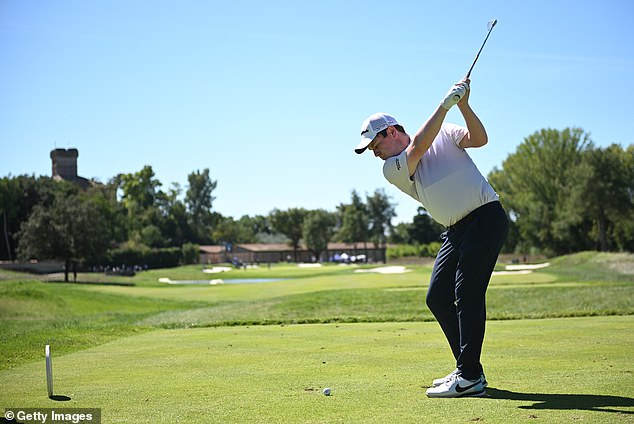 ‘I was down and out two or three months ago,’ he said. ‘I didn’t know what I was doing. I didn’t know where to go. But I spoke to the right people and there’s so much hard work gone into this. I didn’t think it was going to come again.’

A week after finishing second at the BMW PGA Championship, it was another moderately underwhelming day for McIlroy. He resumed play a stroke behind Fitzpatrick, but was horribly wayward off the tee on the front nine, which he opened with a double bogey before gritting his way back to level par at the turn.

Birdies at 12, 13 and 15 moved McIlroy to 12 under, one off the lead, but he drove into water at 16th to end his title push with a bogey. A birdie at the last lifted him back into the top four.