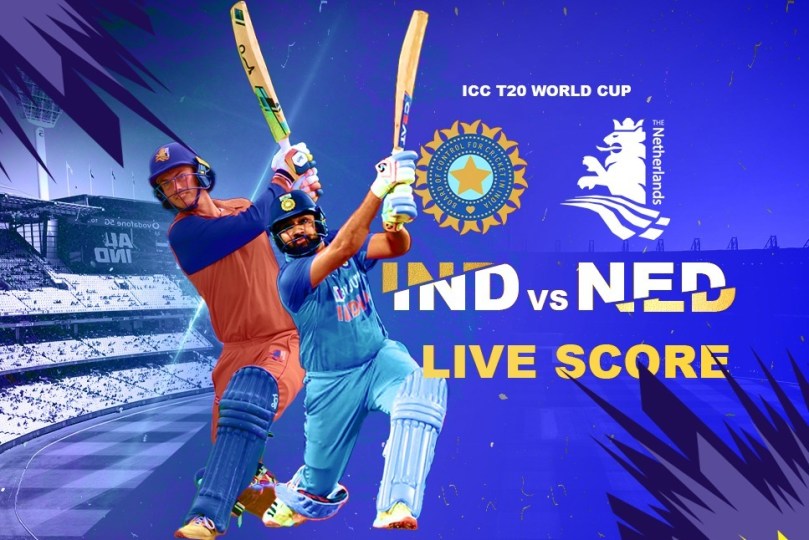 India vs Netherlands LIVE Streaming: ICC T20 World Cup 2022: Team India’s top-order under-performed against Pakistan but will get a fair chance to test their mettle against the Netherlands attack. On a high after a breathtaking performance against Pakistan, the Indian team is unlikely to face much challenge from minnows Netherlands in their T20 World Cup match, on Thursday. The formidable Indian batting line up is expected to bully the ‘Orange’ attack which is decent but not exactly menacing. Follow IND vs NED LIVE Score Updates with InsideSport.IN

For India, the primary aim will be to guard against complacency as there would always be a chance of going off the boil after winning an emotionally exhausting high-intensity game. The contest will be a chance for three of the top four batters — skipper Rohit Sharma, inconsistent KL Rahul and dangerous Suryakumar Yadav — to get some runs under their belt before the next big game against South Africa, the result of which will determine the group standings.

India Playing XI vs NED: Paras Mhambrey says ‘Rest is not a discussion’, but will Yuzvendra Chahal get a go at Spin-friendly Sydney? Follow ICC T20 World Cup LIVE

The Netherlands’ attack comprises Fred Klaassen, Bad de Leede, Tim Pringle and former Proteas left-arm spinner Roelof van der Merwe, who is the only player in the rival line up to have played in IPL in the past.

The Netherlands bowling attack appeared decent in the League stage as well as in the Super 12 game against Bangladesh at Hobart, which is colder, windier and offers pitches that assist bowlers.

However it will be a different ball game on Thursday as they will have to contend with a high-quality batting line-up on an SCG track which will aid stroke-making. New Zealand had scored 200 against Australia at the SCG in their first game and the Indian batters would also want to have a first go.

A favourable result in the spin of coin will give captain Rohit Sharma and coach Rahul Dravid a chance to bat first, put a total and defend it although it will be a different challenge against better sides. But batting first will provide adequate time for someone like KL Rahul to get back his rhythm and be ready for the Proteas test.

Bowling coach Paras Mhambrey confirmed on Wednesday that the Indian team will play the same eleven against the Netherlands that took the field against Pakistan on Sunday.

“We are not resting anyone. When you have got momentum in the tournament, you want individuals to be in form as well, so every game becomes important,” Mhambrey said on the eve of the game.

The coach also insisted that all-rounder Hardik Pandya is fit and himself wants to play all games. Pandya had suffered cramps while batting against Pakistan towards the end of India’s chase.

“He is alright, fit to play. We are not considering resting him. He himself wants to play all games. He is an important player, adding balance. Yes, Virat finished the game but we needed an experienced player who knew what can happen if we take the game deep,” Mhambrey said.

In a tournament like the World Cup, no team likes to tinker with the playing eleven and the Indian team management is also following the same theory.

Even though Virat Kohli’s epic knock and Pandya’s big-hearted performance won India the match, there could be a slight debate if this is still India’s best T20 XI.

Not being able to accommodate an enforcer like Rishabh Pant in the playing eleven in order to make a place for Rahul, is a bit disappointing from every cricketing aspect.

We are here for our 2⃣nd game of the #T20WorldCup! 👏 👏#TeamIndia pic.twitter.com/96toEZzvqe

Yuzvendra Chahal, India’s most versatile white ball spinner wasn’t played against Pakistan but at the training session he looked sharp as he beat all the top batters during India’s final net session.

In case of pace bowlers, there will be no change in the composition unless there is some last-minute niggle to anyone. The Netherlands is a decent side and some of their players were given central contracts after they started playing the ICC World ODI league. There is Tom Cooper, former Australian U-19 and Australia A cricketer, who has also played BBL for Brisbane Heats and county cricket for Somerset.

There is a young opener of Indian origin Vikramjit Singh, who is considered to be promising in their cricketing circles.  Tim Pringle is also part of the squad. A slow left-arm spinner and a lower order batter, Tim’s father Chris had in mid ’90s played a lot of games for New Zealand as a seam bowler.

The Indian fans would remember Pringle being one of the bowlers, who was hammered by Sachin Tendulkar whenever the two teams clashed. Bas de Leede, whose father Tim represented the Netherlands in the 1996 ODI World Cup, is also part of the squad.