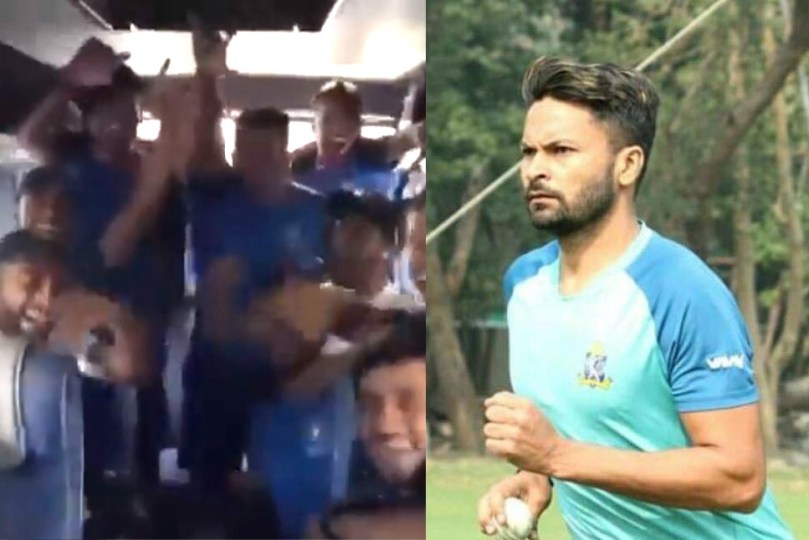 IND vs SA ODI: Bengal pacer Mukesh Kumar has been picked in the Indian squad for the upcoming series against South Africa.…

IND vs SA ODI: Bengal pacer Mukesh Kumar has been picked in the Indian squad for the upcoming series against South Africa. The three-match ODI series starts from Thursday. The pacer is currently featuring for Rest of India against Saurashtra in the ongoing Irani Cup. Kolkata Knight Riders posted a video of ROI players celebrating his call-up in the team bus. Follow India vs South Africa ODI series live updates with InsideSport.IN

Also Read: India ODI Squad SA: Mukesh Kumar gets EMOTIONAL with maiden India call-up for SA ODI series, says ‘If father would have been alive, he would be happiest’

The video is quite hilarious on its own. ROI batter Sarfaraz Khan asks Mukesh funnily ‘do you know, you have been selected to the Indian team’. Kumar responds with a yes. Following that, there was a ‘hip hip hurray’ for his name.

That’s all of us cheering for Mukesh’s maiden #TeamIndia call up!🇮🇳💙

Kumar has deservedly got a call into the Indian team with some impressive performances under his belt in the domestic circuit. Besides picking five wickets so far in the Irani Cup, he was solid in the India A series against New Zealand. He picked up nine wickets. Even in the Ranji Trophy, the pacer starred with some solid show last season.

The pacer, however, got a chance for the upcoming series with the core squad of India travelling to Australia for the T20 World Cup. The Indian-side will be led by Shikhar Dhawan and the team comprises of fringe players in the ODI series.

At present, Kumar is playing in the Irani Cup. He will only leave after the match is over. His joining the Indian squad depends on when the Irani Cup finishes. Though it is a Day 5 affair, there is a possibility of the pacer joining the team early if the game finishes on Tuesday.

Saurashtra lead by 92 runs with three wickets in hand. If ROI manages to win the contest on Tuesday, Kumar can leave early. Irrespective of when he joins, the pacer will hope to get a debut match in the series too.