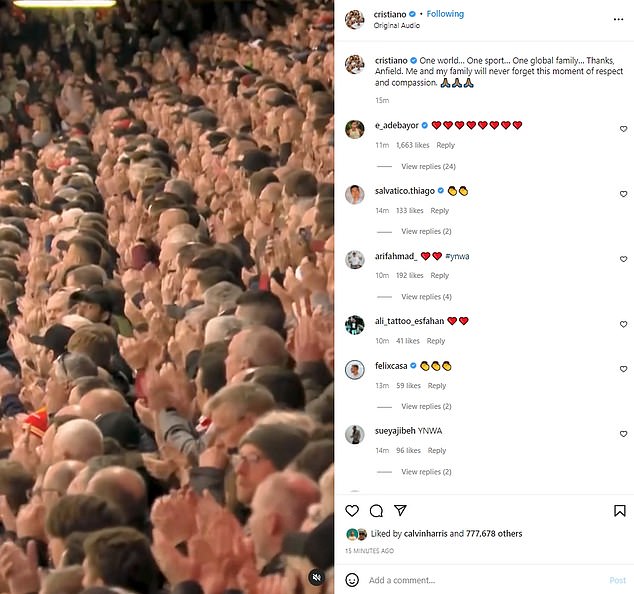 ‘One world… one sport… one global family… Thanks, Anfield’: Cristiano Ronaldo tells Liverpool fans he ‘will never forget’ their minute’s applause after the tragic death of his baby son, as he arrives for his second day back at Man United training

Cristiano Ronaldo has taken to social media to thank Liverpool fans for singing ‘You’ll Never Walk Alone’ in the seventh minute of their game against Manchester United on Tuesday.

Ronaldo missed the match at Anfield after the death of his newborn baby boy and Liverpool and United supporters joined in a round of applause in the seventh minute – Ronaldo’s number – as a symbol of support to the Old Trafford hero.

‘One world… One sport… One global family… Thanks, Anfield. Me and my family will never forget this moment of respect and compassion,’ Ronaldo wrote on Instagram alongside footage of the moment.

He returned to Manchester United training on Wednesday and was again pictured arriving at their Carrington base on Thursday, the day United confirmed Erik ten Hag as their new manager.

Ronaldo and his partner Georgina Rodriguez announced back in October that they were expecting twins. Their baby girl survived. 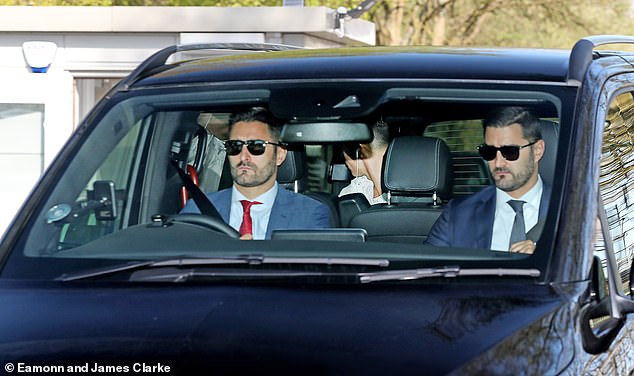 United have a big game against Arsenal on Saturday and it seems as though their talismanic forward will be available for selection.

A statement from Ronaldo and Rodriguez on Monday confirmed the death of their baby boy as ‘the greatest pain’.

‘It is with our deepest sadness we have to announce that our baby boy has passed away. It is the greatest pain that any parents can feel,’ the announcement read.

‘Only the birth of our baby girl gives us the strength to live this moment with some hope and happiness. We would like to thank the doctors and nurses for all their expert care and support.

‘We are all devastated at this loss and we kindly ask for privacy at this very difficult time. Our baby boy, you are our angel. We will always love you.’

Ronaldo’s sister Katia Aveiro released an emotional open letter in which she said ‘our little angel is already on daddy’s lap,’ in reference to the pair’s father, Denis, who passed away in 2005 after a battle with alcoholism.

‘I love you and my heart is with you over there,’ Aveiro’s letter read.

‘May God take care of you and strengthen your path more and more.

‘Our angel is already on daddy’s lap. And our little girl is there firm and strong and full of health and is going to show us with every day that only love matters.’