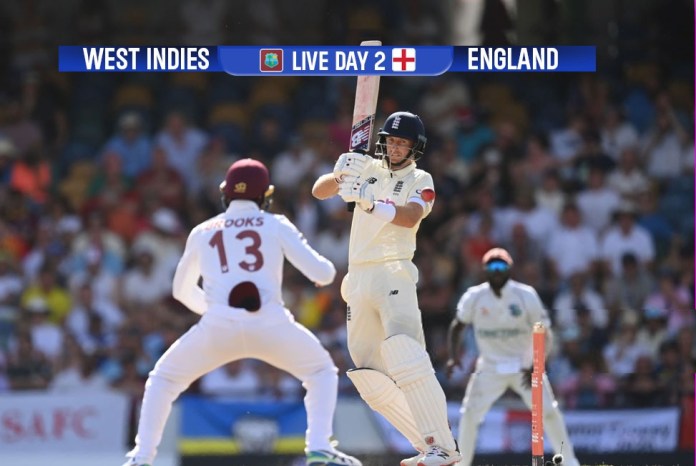 WI vs ENG Live Score – Joe Root 25th TON: Joe Root with his unsatiable hunger for runs will look for DADDY TON on Day 2 of 2nd Test. Root completed his 25th test ton on Day 1, his 8th hundred in 19 test matches. England on the other hand will score in the range of 400 plus to put pressure on the home team. Follow West Indies vs England LIVE Updates with InsideSport.IN

Earlier on Day 1 Root along with Dan Lawrence added 164 runs for the 3rd wicket and took England to 244/3 by the end of Day’s play. Young Lawrence was out for 91 while Root at stumps stayed unbeaten at 119*.

Joe Root 25th TON: England captain as ususal was sublime in his approach as he completed his eighth test hundred in 19 Tests since the start of 2021.

Root could have been given caught behind on 23 and was dropped on 34 but ended 119 not out – his 25th Test ton and second in as many innings.

England’s ascendancy was checked slightly by the loss of Dan Lawrence to end the day, after he compiled a dazzling 91.

Lawrence had looked on course for his maiden Test ton after combining with Root for a brilliant, aggressive stand of 164, but chipped Jason Holder to extra cover in the final over.

Root had laid a platform with Alex Lees, who made 30 from 138 balls, after opener Zak Crawley was caught behind for a duck in the fourth over.

The late wicket boosted West Indies who had otherwise been wasteful on another flat pitch.

West Indies missed chances:
Didn’t review when Joe Root was caught behind on 23 (off Holder).
Dropped (by Joshua Da Silva) Root on 32 off the bowling of Roach.
Dropped (by Alzarri Joseph) Dan Lawrence on 72 (off Seales).