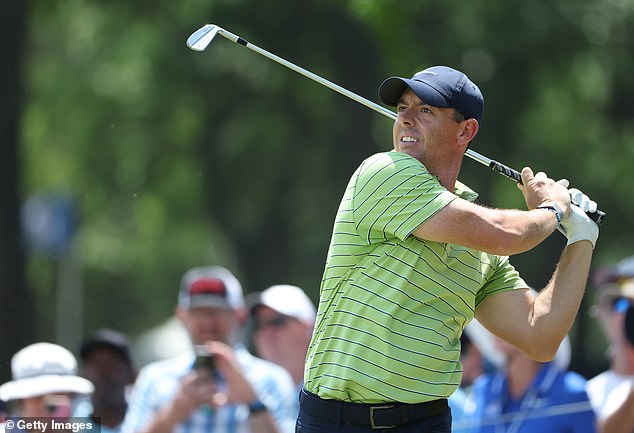 Rory McIlroy was buoyant after shooting 65 to take the early lead in the US PGA Championship at Southern Hills and ‘get off to a good start in a major for a change’.

The Northern Irishman ended his run of poor first rounds in the Grand Slam events with a wonderful effort that he enthused was ‘close to the complete package’.

McIlroy added: ‘It would have been complete but for a couple of bogeys late on but I can’t complain. I hit the ball so well for most of the day.’

It was McIlroy’s lowest opening round in a major for 11 years, when he began with a 65 in the US Open and went on to complete a runaway victory.

‘It’s important now not to get carried away,’ he cautioned.

‘I hit the ball great, as I have been doing for a while now. I knew I could build on my final-round 64 at the Masters and I’ve done that.

‘But it won’t mean anything unless I can keep it going. I’ll need to play as well for the next three days if I am going to have a chance to win.’ 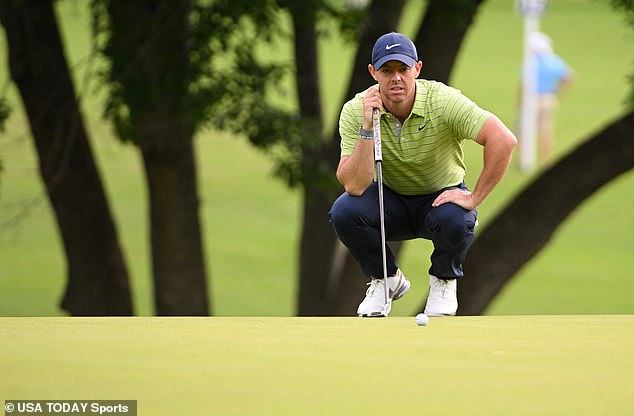 McIlroy held a one-shot lead among the morning wave over Americans Will Zalatoris and Tom Hoge.

By stark contrast, playing partner Tiger Woods could only manage a 74 and admitted he is struggling with the right leg that was almost amputated following his horrific car accident in Los Angeles in February last year.

‘My leg is fine until I play golf,’ revealed the 46-year-old. ‘I just can’t load weight on to it. That hurts, pressing off it hurts, and walking and twisting hurts.

‘Consequently, I hit a lot of bad iron shots and I left myself in some bad spots where it was difficult to save par. I’ve felt better emotionally, too. 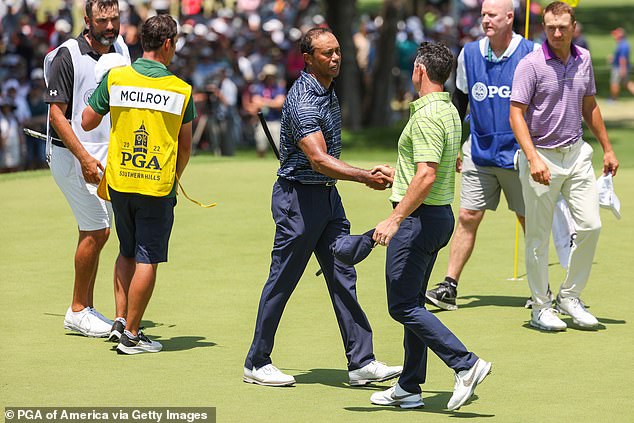 ‘It made for a frustrating day. Now it’s a case of having a few ice baths this afternoon to get the inflammation down so I can play in the second round.’

Jordan Spieth, the third member of the illustrious group, was also downcast after a 72 left him well off the pace in his bid to become just the sixth golfer to complete the career Grand Slam.

‘Rory played great but I made far too many mistakes to have any chance of scoring as well as him,’ said the Texan.