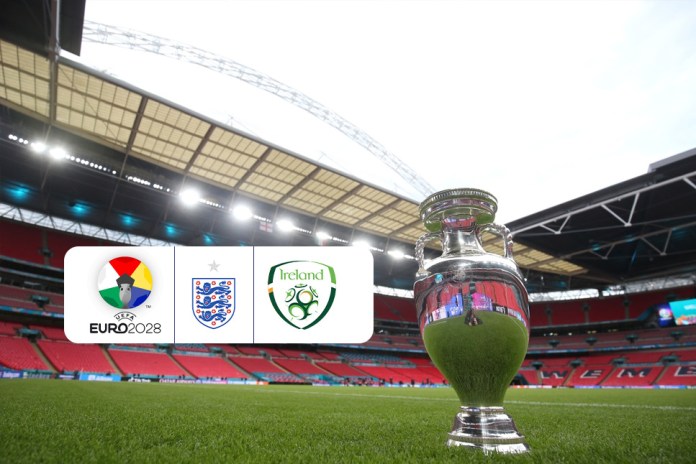 UEFA Euro 2028: UK and Ireland to HOST Euro 2028 – The United Kingdom and Ireland will host Euro 2028 after no rival bid came forward before this week’s deadline. Although Russia have now announced that they would rival UK and Ireland to host the UEGA Euro 2028 competition despite being barred from the World Cup and other UEFA competitions. UEFA will make a formal decision to appoint Ireland, England, Scotland, Wales and Northern Ireland as hosts on April 7 with the formal application process to be completed by Wednesday, March 23. Follow Insidesport.IN For more updates

With no other bids submitted before the deadline, UEFA will next month announce that Euro 2028 will be held in Ireland and the UK.

Russia have declared an interest in rivalling the UK and Ireland for the right to host Euro 2028 despite their ban from international football.

Russian clubs and national teams are suspended by FIFA and UEFA over the country’s invasion of Ukraine, pending the outcome of an appeal by the Football Union of Russia to the Court of Arbitration for Sport. However, that has not stopped the union’s executive committee giving its backing for a bid for 2028 and 2032, with the deadline for expressions of interest set for Wednesday.

A post on the union’s official website outlined a number of results from Wednesday’s executive committee meeting which included to “support the decision to declare interest in hosting the European Championship 2028 or 2032 in Russia”.

Russia successfully hosted the 2018 World Cup but has been exiled from the international sports community since its invasion of Ukraine a month ago, with UEFA having already stripped St Petersburg of hosting rights for this season’s men’s Champions League final.

Turkey had been pushing Uefa to consider a bid from the country for either 2028 or 2032 but that appears to have been ruled out. Russia had also been considering a bid for the tournament in six years but that has been abandoned following the invasion of Ukraine.

Uefa is expected to expand the European Championships to 32 teams for the 2028 edition although under new rules none of the five host nations will qualify automatically.

The football associations of England, Northern Ireland, Scotland, Wales and Ireland have concluded that the European Championship represents a better option than the World Cup after conducting a feasibility study, which was backed by UK government money.

“On balance, the five associations have decided to focus solely on an official bid to host Euro 2028 and have agreed not to bid for the 2030 World Cup,” they said in a statement. “Hosting a Euro offers a similar return on investment, with the European tournament carrying a far lower delivery cost and the potential of the benefits being realised sooner.

“It would be an honour and a privilege to collectively host Euro 2028 and to welcome all of Europe. It would also be a wonderful opportunity to demonstrate the true impact of hosting a world-class football tournament by driving positive change and leaving a lasting legacy across our communities.”