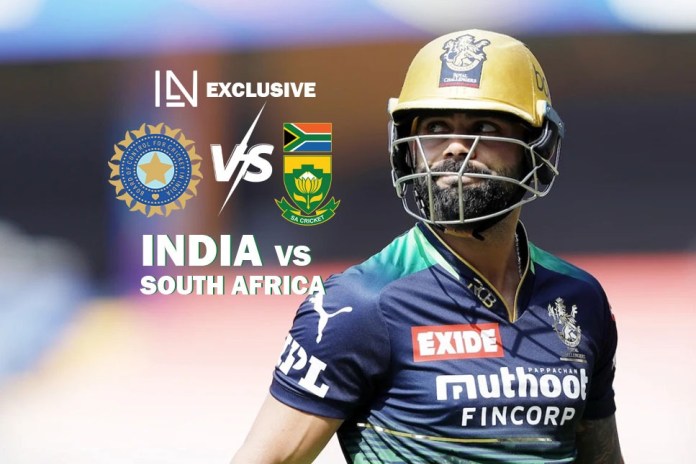 India Squad for SA – BCCI Selection Committee Meeting: The Chetan Sharma-led India selection committee will have a heart to heart with Virat Kohli before the squad selection for South Africa series. As Kohli has endured a nightmarish struggle with the willow, selectors want to understand whether he wants a break. Follow IND vs SA LIVE and IPL 2022 Live Updates with InsideSport.IN.

“It’s a phase every player goes through and Virat is also going through the same. He will overcome it for sure. But as selectors, we will have to think about the team first. We will have a chat with him on whether he wants a break from cricket or continue to fight the slump,” a member of the selection committee told InsideSport.

India Squad for SA: Selectors to speak to Virat Kohli before squad selection for South Africa, likely to be rested for SA & Ireland tour

BCCI Selection Committee Meeting – Will Virat Kohli be rested? Virat Kohli has already broken the record of most golden ducks in a season with his first-ball dismissal against Sunrisers Hyderabad on Sunday.

Kohli was later captured to be dejected with his lacklustre show. He has managed an average of just 19.64 in 12 matches in IPL 2022 so far.

However, as per information available with InsideSport, Virat Kohli will be rested for the South Africa series and Ireland tour.

“We will have a chat with him on whether he wants a break from cricket or continue to fight the slump,” a member of the selection committee told InsideSport.

India Squad for SA: Selectors to speak to Virat Kohli before squad selection for South Africa, likely to be rested for SA & Ireland tour

While IPL form may not always be criteria for India selection, Virat Kohli’s international form too has been dwindling.

That has forced the selectors to rethink whether Virat Kohli should be picked in the squad.

Many including Kohli’s close friend and former India coach Ravi Shastri have advised him to take rest, calling him ‘overcooked’. While Kohli is yet to inform the selectors about his availability, they will have a serious chat about his future.

It should be noted that Kohli does not have a captain’s immunity anymore and can be dropped like Ajinkya Rahane and Cheteshwar Pujara. But before taking a drastic step, the selectors want to understand what Kohli thinks about his future.

India Squad for SA: Why Virat Kohli needs a break?

SRH vs RCB LIVE: NIGHTMARE continues for Virat Kohli, gets out for GOLDEN DUCK against SRH to register THIRD golden duck of the season – Watch Video

Can Virat Kohli lose his place in India T20 squad? – The way things are going, he can. BCCI is desperate to land an ICC trophy and the T20 World Cup is of huge priority. With Suryakumar Yadav and Ishan Kishan in the mix, the prospect of dropping Virat Kohli isn’t ruled out.

“He is 33 and plays around 40-50 matches a year. It is only natural that it will take a toll on his body. Should he be dropped is a question that will be answered later. Virat has done enough for Indian cricket to earn that place and respect. If he wants a break, he will get a break but only after we have a chat with him,” the selector told InsideSport.

The squad for South Africa series will be made during the IPL 2022 Playoffs. The selectors will speak to Kohli before the selection meeting with Rohit Sharma and Rahul Dravid.