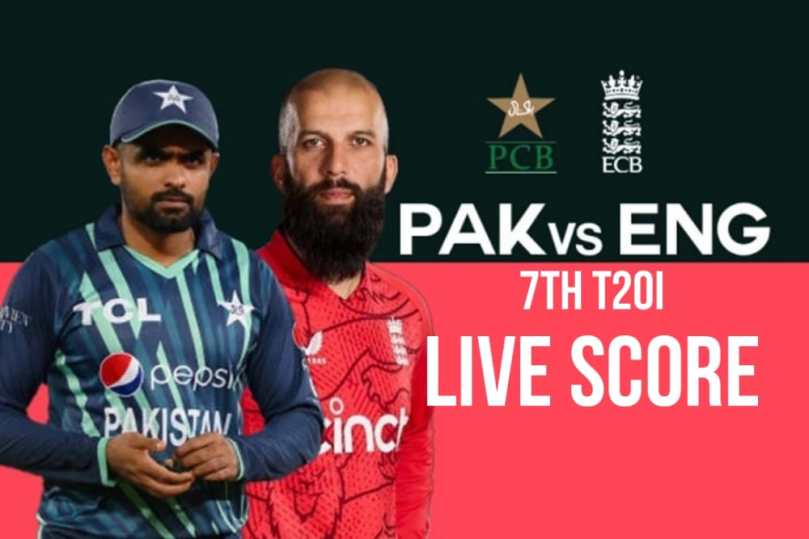 PAK vs ENG T20 LIVE – Pakistan England LIVE Streaming – TOSS at 7:30PM: In the winner-takes-all battle, England are all set…

PAK vs ENG T20 LIVE – Pakistan England LIVE Streaming – TOSS at 7:30PM: In the winner-takes-all battle, England are all set to cross swords with Pakistan in the 7th and final T20 of the series today at 8PM. The series is poised at 3-3 as England leveled it by thrashing Pakistan by eight wickets in the sixth T20. The Babar Azam-led side will be eyeing a comeback in the last T20 game, while England would be aiming to seal the series with yet another convincing performance. For both teams, Sunday’s clash in Lahore will also serve as the ideal warm-up for the impending ICC T20 World Cup. Check Pakistan England Playing XI & Follow PAK vs ENG LIVE Score updates with InsideSport.IN

Pakistan England LIVE Streaming: Under the floodlights of the Gaddafi Stadium, a series which is tied at 3-3 will reach its conclusion. With its ‘winner takes it all’ nature simulating the knockout atmosphere of a tournament, the Pakistan vs England 7th T20 match will gonna be a sure-shot blockbuster.

At the end of the sixth T20, Pakistan yet again failed to seek an answer to middle-order woes. Babar Azam again came to their rescue as he scored a crucial 87, but the contributions from Iftikhar Ahmed, Asif Ali, Haider Ali and Nawaz were not noteworthy. With T20 World Cup looming, this is certainly not a good sign for Pakistan.

Meanwhile, England have taken a lot of positives from these six games. A lot of young players like Harry Brook, Phillip Salt, Ben Duckett, and Luke Wood have grabbed their chances with both hands. Salt’s blazing 88 not out at a strike rate of 214.63 delivered a crucial eight-wicket win for England in the 6th T20. England’s batting is their biggest strength and even without Jos Buttler, and Ben Stokes it is looking dangerous.

After Sunday’s clash, the two teams will then depart Down Under to finalise their preparations for the all-important ICC Men’s T20 World Cup – which commences on 16 October.

The first two games played at Gaddafi Stadium were very different from one another. On Friday, England chased down 170 in just 15 overs after struggling to post 139 in the fifth T20I. For the series finale, clear skies are anticipated. Tomorrow can also see some dew because Lahore has a high humidity level.

Chasing will be the preferred option on Lahore’s pitch with 170 being the par score.

Haris Rauf is set to replace Shahnawaz Dahani who got severely thrashed by English batters in the last game. It is anticipated that Mohammad Haris will make way for Mohammad Rizwan.

Jos Buttler’s availability is intriguing, but even if he does, will England bench Phil Salt after he smashed 88* off 41 to tie the series?