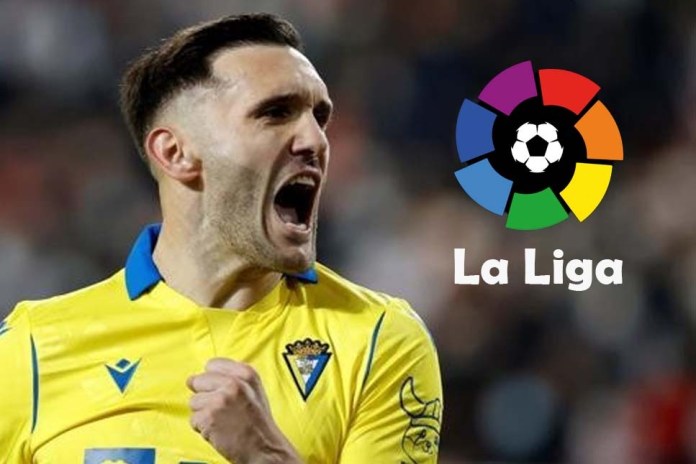 La Liga: Sevilla up to second in La Liga despite Perez wonderstrike- Sevilla moved up to second in the table after Friday’s 1-1 draw at home with Cadiz despite Lucas Perez’s sublime second half free-kick for the La Liga strugglers.  Follow more Updates with InsideSport.IN

Julen Lopetegui’s men go a point above Barcelona, who host Mallorca on Sunday, thanks to Youssef En Nesyri’s early effort.

The point gained by the visitors doubled their advantage over Granada, who are in the final relegation spot.

Morocco attacker En Nesyri scored his first goal of the campaign since September as he headed home from Ivan Rakitic’s seventh minute corner.

A victory would have sent Sevilla three points clear of Barca but Perez’s equaliser put those hopes to bed.

La Liga: Sevilla up to second in La Liga despite Perez wonderstrike

The home side’s midfielder Joan Jordan was penalised for a clumsy tackle before 33-year-old Perez whipped in his third goal in as many games after a drought stretching back six months.

Cadiz host Elche next weekend in their attempt to stay in the top-flight after promotion in 2020.

Sevilla head to Champions League semi-finalists Villarreal on May 8 and also have a tricky trip to Atletico Madrid during their final four games of the season.

On Saturday, Real Madrid can win the title for a 35th time if they avoid defeat against Espanyol.

Carlo Ancelotti is likely to rotate his side with Wednesday’s Champions League semi-final second leg against Manchester City on his mind.

La Liga: Sevilla up to second in La Liga despite Perez wonderstrike