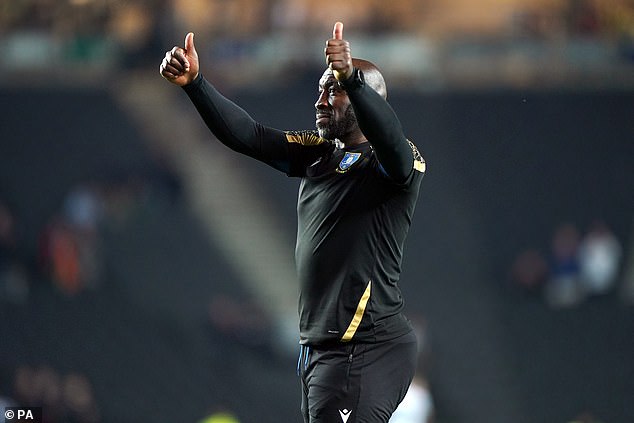 Darren Moore was reluctant to join the festivities. With two games to play, three if things go to plan against Sunderland, the business is unfinished. But he gave in eventually and strode out of the tunnel to join his Sheffield Wednesday players and drink in the decibels.

‘There’s a transformation happening here and it continues with moments like that,’ said Moore, once the din had subsided and more than 30,000 happy Owls fans drifted out of Hillsborough, still singing in the sunshine with their inflatable palm trees, bananas and crocodiles tucked under arms.

Almost a year ago, they watched their team relegated on the final day of the Championship season, a 3-3 draw at Derby insufficient to rescue a campaign doomed by a 12-point deduction for breaking spending rules.

On that day, Moore gathered his strength to drag himself back to the touchline at Pride Park after being hospitalised with post-Covid pneumonia. It is the mark of the man. He felt it was important to stand by his team but he was not in the best of health.

Nor were Wednesday. They could easily have carried on sinking this season. There were times when they did and a play-off place seemed far beyond them. Times when Moore’s position has teetered precariously.

Yet they have held it together and perhaps emerged as a more coherent club, with recruitment back in the hands of the football staff and helping to build a balanced team for Moore, well-equipped for the third tier. They are adventurous and hit some form at the right time, winning 14 of the last 20.

Hence the talk of a transformation. ‘A joint effort, not one individual,’ said Moore, with due credit to their loyal fanbase. ‘It was a fabulous atmosphere. I was really looking forward to the day and it lived up to expectations. And thank you to the fans for getting us back in the game.’

The home team went behind in the fourth minute to a goal the gallows humourists here considered an inevitability, scored by George Hirst, 23-year-old son of Owls legend David on loan at Portsmouth from Leicester.

Born in Sheffield and nurtured in the Wednesday academy, Hirst ran down his contract to leave for free and has yet to fulfil the potential on display when he starred in England’s youth ranks. But he has flourished in recent weeks. 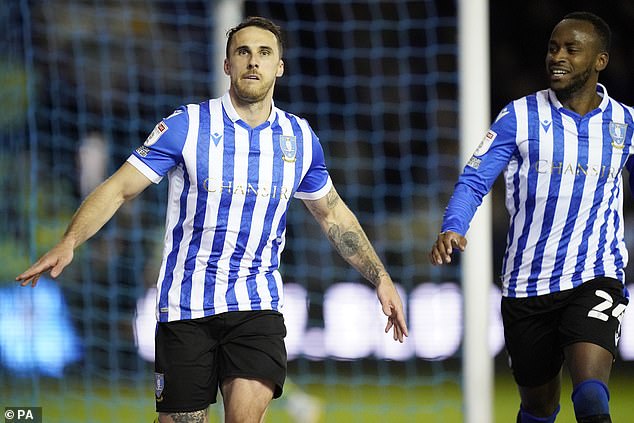 This was an 11th goal in his last 17 appearances, but it sparked Moore’s side into life. Lee Gregory equalised before Saido Berahino, Jordan Storey and George Byers scored. Wednesday ran away with it and Hillsborough bounced.

The Owls finished the campaign in fourth with 85 points and a play-off semi-final against Sunderland, with the first leg on Wearside on Friday.

‘A stern test,’ warned Moore. ‘This is the strongest division at League One level for many a season if not of all time. There are four teams in the play-offs all with 80-odd points. Some big clubs in this division but no one wins anything on stature or reputation.’

For all the positive vibes, the task is far from complete. Wednesday lost 5-0 at the Stadium of Light in December and Sunderland, stuck in the third tier for four seasons now and desperate for promotion, have produced their best performances in the run-in, under new boss Alex Neil.

MK Dons, who won 5-0 at Plymouth on Saturday to finish on 89 points, meet Wycombe in other semi-final. It’s the play-offs where anything can happen.

Moore was right to be reluctant but he and his club are in a healthier place and they enjoyed this moment in the sunshine.