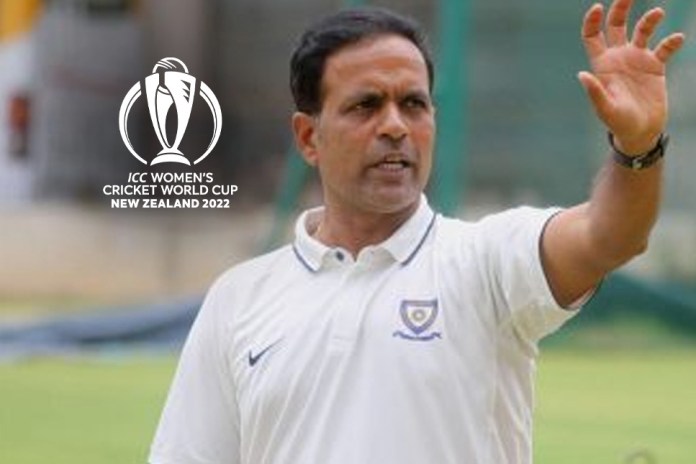 Women’s World Cup: Indian batting coach Shiv Sunder Das on Thursday said rotation of strike is a cause of worry and they might have to rethink the team’s batting order following its 62-run defeat against New Zealand in the ICC women’s World Cup. Follow Women’s World Cup updates on Insidesport.IN

Chasing 261, India failed to capitalise on the power play with the top order boasting experienced duo of Smriti Mandhana and Deepti Sharma alongside rookie Yastika Bhatia failing to fire as India were all out for 198 in 46.4 overs to concede a 62-run defeat.

“The top order has to fire. We have the batting firepower to go deeper in the tournament. Looking at the top order, once you get going in the 10-15 overs, you can put on good score,” Das said in the post-match media interaction.

With three southpaws in the top-order, the White Ferns gave the new ball to off-spinner Frances Mackay as she returned with a tidy 8-1-25-0.

“The strike rotation is a worry for us. The top order had has to fire. We have an experience top-order with Smriti batting. We thought, we can get some runs. Maybe we have to rethink about it (the batting order) in the next game,” Das said.

The 44-year-old from Odisha, however, defended the decision to open with inexperienced Yastika, who was promoted to the top in place of the out-of-form Shafali Varma.

“We have seen in the practice matches that she is a good batter. She has just played one game, hope she will come good in the next matches.”

On Shafali’s exclusion, Das said: “She has got a fair chance in 7-8 games. We needed to give her a break. She’s a really talented batter. Hope she gets going in this break and come back stronger.”

The Mithali Raj-led side, which slipped to fifth place among eight teams after one win (Pakistan) and one loss from two matches, will next face the West Indies on Saturday.

“The focus is on the first 10-15 overs. We have the experience and the ability. We just have to express ourselves,” Das said.

“We have to give credit to New Zealand, they bowled well with a tight line. We have to work, with one day to go (West Indies).”