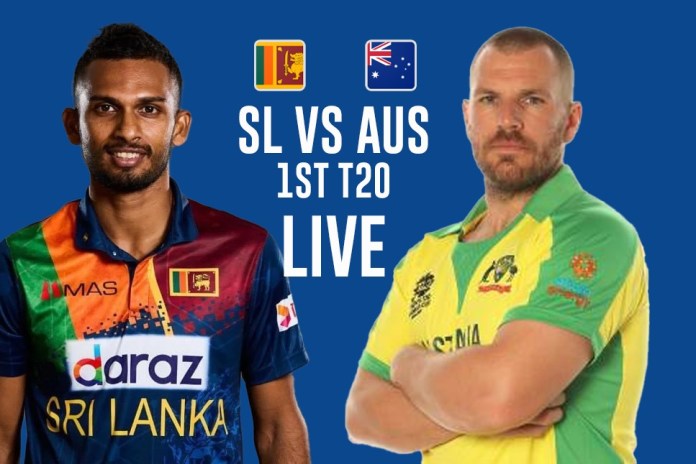 SL vs AUS Live Score – SriLanka Australia 1st T20 LIVE: Aaron Finch-led Australia will take on hosts Sri Lanka in three-match T20I series starting from Tuesday here at the R. Premadasa International Cricket Stadium, Colombo. Sri Lanka who has been hit by the economical crisis will be hoping to spread a smile on their fans by gifting them a win against visitors Australia. SL vs AUS LIVE Updates with InsideSport.IN

SL vs AUS Head to Head: So far both teams had played 22 T20I matches together. Australia has won 12 matches and SL have won 9, one match was tied.

The last time Australia and Sri Lanka faced each other in T20I format was in February 2022 in a home series in Australia which was a five-match series. Kangaroos won the series by a 4-1 margin.

Australia won the first match by the DLS method in which batting first Aus made 149 runs with the loss of nine wickets, and Sri Lanka made 122 runs and lost eight wickets. The rain stopped the play.

Second T20I, Australia won the match in super over, batting first Aus scored 164 for 6. Sri Lanka tied the innings by making 164 with the loss of eight wickets and the match went to super over where SL scored five runs and Aus comfortably won the match.

Third T20I, Australia won the match with six wickets remaining as Sri Lanka batted first and scored 121 runs and lost six wickets. Aus chased the target in the 17th over and register their third win in the series.

The thrill is in the suspense. Just 2 days more for the curtain raiser! ⏳#SLvAUS #CheerForLions pic.twitter.com/KaZNY4t6XM

Fourth T20I, Australia won the match with six wickets remaining as Sri Lanka came in to bat first and scored 139 runs at the loss of eight wickets. The man in yellow chased the target comfortably in the 19th over and won the match.

Fifth T20I, Sri Lanka won the match with five wickets, Australia came in to bat and scored 154 for 6. Guests chased the target and register their first and only win in the series.

Marsh, David Warner, Glenn Maxwell and Steve Smith are all back after missing recent T20 matches against Sri Lanka at home in February. Ashton Agar takes the lead spin duties with Adam Zampa out.

Sri Lanka too have announced their Playing XI.