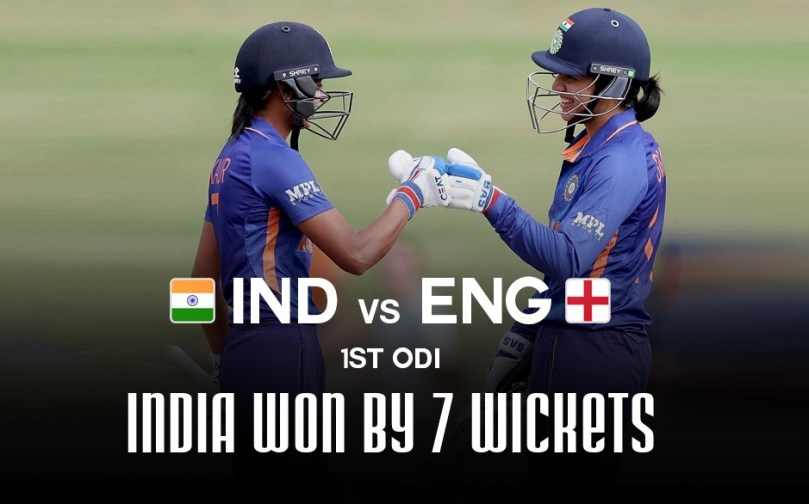 IND-W vs ENG-W Highlights – India win by 7 wickets: Smriti Mandhana, Harmanpreet Kaur and Yastika Bhatia were three stars for India as India sealed a 7-wicket win over England in the 1st ODI. Chasing a target of 228, India made short work of England’s bowling attack. Mandhana smashed 91 while Bhatia scored a 47-ball 50. Harmanpreet remained unbeaten on 74 to take India home with 34 balls to spare. Check INDIA-Women vs ENGLAND-Women 1st ODI Highlights with InsideSport.IN.

Earlier, England set a 228-run target for India after sent to bat. It was Alice Davidson-Richards who scored her maiden ODI fifty and Danni Wyatt’s 43 that powered England to a competitive 227/7 total. Indian spinners spun a web around

England overs as scoring became difficult but the two besides Sophie Ecclestone and Charlie Dean helped England in the cause in 1st ODI at Hove.

England posted a rather disappointing 227/7 in their 50 overs, with Alice Davidson-Richards (50*) and Danni Wyatt (43) being the top scorers. Deepti Sharma took a remarkable 2/33 with the ball. Chasing 221, fifties from Mandhana (91), Harmanpreet (74*) and Yastika (50) helped India brush off the English challenge with 34 balls to spare. Chasing 221, India faced an early hiccup after opener Shafali Verma was dismissed for just one run by pacer Kate Cross after her flick attempt went into the hands of a fielder at the midwicket region. India was 1/3 at this point.

After that, opener Smriti Mandhana and wicketkeeper-batter Yastika Bhatia pushed the innings into another gear with their aggressive intent, hunting every ball that they could. They helped their side cross the 50-run mark in nine overs and also developed a fifty-run stand.

The hosts’ search for wickets continued as the duo kept the scoreboard running with healthy mix of strike rotation and boundaries. Bhatia brought her half-century in just 45 balls after a lucky inside edge that went for four.

Charlie Dean broke up the 96-run stand between the duo, as the offspinner’s delivery went through the gap between bat and pad and hit the top of off stump. Bhatia was back for a well-made 50 off 47 balls. India was at 99/2.

The next batter was skipper Harmanpreet Kaur. She carried from where the previous partnership left off, providing valuable support to Mandhana, who also completed her fifty. Mandhana was looking well on course towards her century, but top-edged a swipe aimed over the midwicket region, giving Davidson-Richards a catch at mid-on that ended the 99-run stand between Mandhana and Kaur. Cross got Mandhana, out for 91 off 99 balls as her second scalp. India was at 198/3.

Harleen Deol was the next batter up. The batters continued whatever was left of the chase. Kaur brought. Kaur brought up her half-century in 80 balls.

Earlier, India women restricted England to a paltry score of 227 at the end of 50 overs after inviting the hosts to bat first, winning the toss at the Hove County ground on Sunday.

The Indian bowlers made merry throughout the innings, taking wickets regularly ensuring the England batters don’t stitch a big partnership.

Indian bowlers made quick inroads into the batting of the English lineup not allowing the hosts to make use of the powerplay overs. India struck in the eighth over after Meghna Singh dismissed Emma Lamb for 12, drawing first blood.

Veteran Jhulan Goswami found Tammy Beaumont (7) plumb in front of the wickets to send her back to the pavilion cheaply leaving England tottering at 21/2 in the ninth over.

Sophia Dunkley partnered with Alice Capsey to steer the English innings and glued together a partnership of 43 runs.

Captain Harmanpreet introduced slow bowlers and that saw the demise of Alice Capsey. Snehrana got the better of Capsey as she spooned a simple catch to the Indian captain and walked back to the dressing room, scoring 19 runs on her ODI debut.

Sophia Dunkley, who played match-winning knocks in the recently concluded T20 series followed soon after and was caught by Deepti Sharma off Harleen Deol for 29 runs leaving England in a state of worry at 88/4 in the 25th over. England stand-in captain Amy Jones was bowled out by Rajeshwari Gaikwad for three, sending half the hosts’ side into the dugout with England still not reaching the three-figure mark. England were 94/5 in the 27th over.

Danielle Wyatt and Davidson Richards then shared a 34-run partnership to England past the three-figure mark. Wyatt was then dismissed by Deepti Sharma as the all-rounder dismissed the timber of the batter.

Richards shared a half-century stand with Ecclestone and took England to 178. The partnership was broken by Deepti Sharma as she caught Ecclestone in front of the wickets in the 43rd over.

The innings never saw a real flourish as the hosts ended with 227 at the end of 50 overs.

Davidson Richards played an unbeaten innings of 50 runs while Wyatt also played a 43-run inning. Deepti Sharma was the pick of the bowlers as she picked up two wickets giving away just 33 runs of her 10 overs.