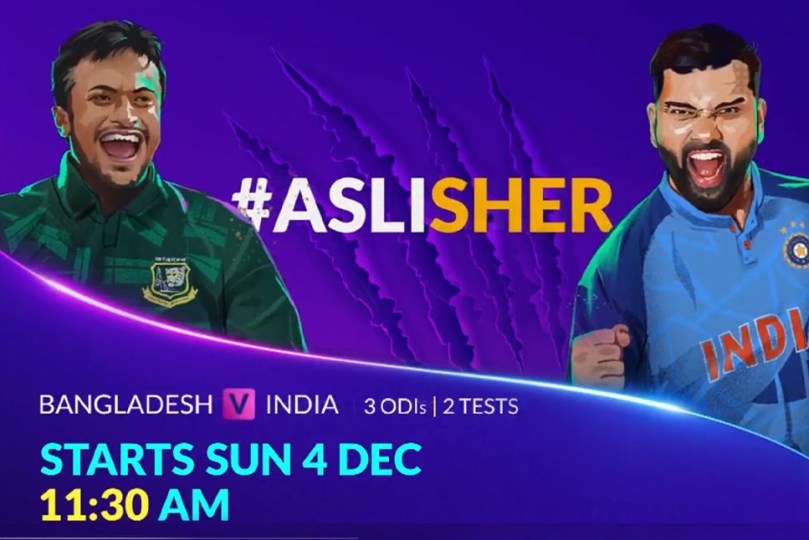 India tour of Bangladesh: Sony Sports Network have acquired the broadcast rights for the upcoming India vs Bangladesh ODI and Test series…

India tour of Bangladesh: Sony Sports Network have acquired the broadcast rights for the upcoming India vs Bangladesh ODI and Test series in India. The Men in Blue led by Rohit Sharma will tour their neighbours for three ODIs and two Tests in what is a significant series heading into 2023. Sony Sports is already building up for the mega clash, releasing their promo for the same. WATCH IND vs BAN LIVE Streaming on Sony Sports Network and follow India vs Bangladesh LIVE updates on Insidesport.IN

India will face off against Bangladesh in two Tests and three ODIs next month. The ODI series kicks off on December 4, with the first Test match being played on December 14. The 50-over games will take place at the Sher-E-Bangla National Cricket Stadium in Dhaka on December 4 and 7 while the last ODI will be played in Chattogram on December 10. Chattogram will also host the 1st Test, before a return to Dhaka for the series finale.

Which team will come out on top as the ultimate #AsliSher? 🦁

Watch India Tour of Bangladesh from Sunday December 4, 11:30 AM onwards, only on the #SonySportsNetwork #BANvIND pic.twitter.com/yYKTuO5kzc

Rohit Sharma will return as captain after having rested following India’s T20 World Cup campaign. The Hit-Man will feature in both ODIs and Tests, with KL Rahul serving as his deputy. All first-choice players will be available for the series except the absence of Ravindra Jadeja, who misses out due to injury.

The ODI series makes the return of India’s main XI having opted out of 50-over contests in the build-up to the T20 World Cup. The year-ender marks the beginning of India’s 2023 World Cup preparation with 11 months to go for the home World Cup. As for the test series, India still remain in contention for a place in the WTC final and needs to win both their matches to boost their chances of making the trip to Lords.