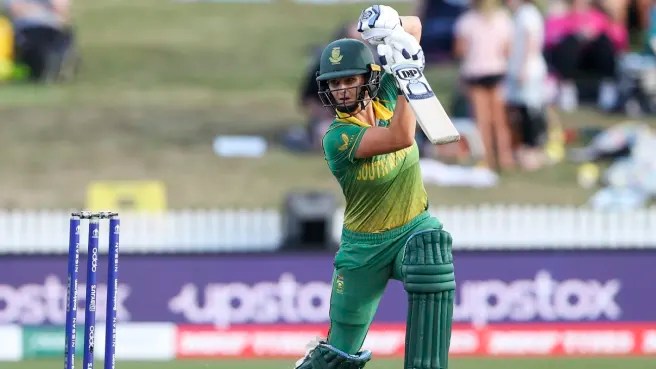 South Africa Beat New Zealand: South Africa was comfortable in the chase of 228 when back to back 5 wickets put them in complete pressure cooker situation. But in the end Marizanne Kapp kept cool in the pressure to drive her team home in the very last over.

Unbeaten and In-Form South Africa gunning for 4th succesive victory have lost back to back wickets. First the mainstay Laura Wolvaardt got out for 67, followed by the wickets of Du Preez (1) and captain Sune Luss (51). Earlier opting to bat first, New Zealand failed to register big score against discplined South African attack and was all out for 228.

Other than Sophine Devine’s 93, pace trio of Shabnim Ismail, Marizanne Kapp & Khaka did not allow the White Ferns to settle or accelerate their innings:

From 4 for 198 in 40th Over, South Africa courtesy brilliant death bowling bowled out New Zealand for only 228 Runs.

New Zealand Bowled Out for 228: Sophie Devine played the CAPTAIN’s knock after opting to bat 1st against the South African team.

Devine finally got out on 93, missing her century by just 7 runs.