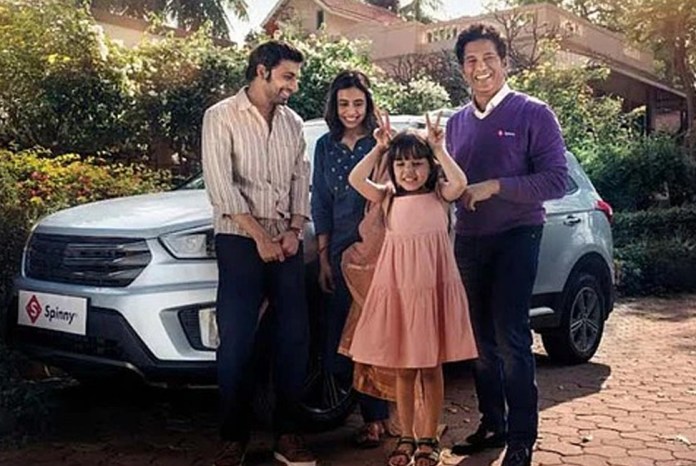 Highlighting the brand’s vision to turn the car buying and ownership journey into a simple and delightful experience, the heart-warming ads feature the brand ambassadors Sachin Tendulkar & PV Sindhu.

Spinny Tendulkar Sindhu Campaign: The digital campaign will run via Spinny’s own social and YouTube channels along with a strong presence across other digital platforms.

It will also be aired during the upcoming IPL 2022 on Disney+Hotstar, with Spinny on board as the associate sponsor.

In addition to Tendulkar’s campaign, the brand is working on a second ad with a similar storyline featuring a customer and brand ambassador PV Sindhu.

In this campaign which comprises two films, Sachin Tendulkar & PV Sindhu, representing Spinny, provide assurance to a family who are about to buy their first car.

The film also strategically encapsulates Spinny’s full-stack features that contribute to creating a seamless vehicle purchasing journey including online research and test drives from home. The finalized car is then delivered at their doorstep – signifying the start of their ‘Khushiyon Ki Long Drive’.

Conceptualised by Spring Marketing Capital, the campaign encapsulates the joy of adding a personal car in the journey of life.

Take a look at the ad film:

Speaking about his involvement in the campaign, Sachin said, “Our country is becoming younger and our ambitions bigger. I am very happy to be associated with Spinny – a team that aspires to create solutions the right way. The team has adopted timeless values to achieve excellence in their business – trust, transparency, and integrity. This is one such story of a family on the start of their Khushiyon ki long drive with Spinny.

TATA IPL 2022 LIVE – Spinny IPL LIVE Streaming Sponsor: It is worth noting that Spinny had earlier announced its association with Disney+ Hotstar as an associate sponsor for the TATA IPL 2022.

Other than SPINNY, Disney+ Hotstar has signed up Dream11 as the co-presenting sponsor.  Tata and CRED have signed as ‘co-powered by’ sponsors on the LIVE Streaming of IPL this year.

Hotstar IPL Streaming Sponsors: According to industry estimates, Disney Hotstar is likely to earn Rs 650-700 crore from the streaming of IPL this year.

The ad revenue growth is mainly on account of additional ad inventory. With two news team coming in IPL this year will witness 24% increase in the number of games.

The other reason is organic ad rate growth.

According to a digital media executive, Disney+ Hotstar has sold out its ad inventory for the tournament.

“The platform had sold 2/3rd of the inventory in the last week of February. It is also eyeing a 20% rate hike from this week. There is tremendous demand for IPL on Disney+ Hotstar,” he stated