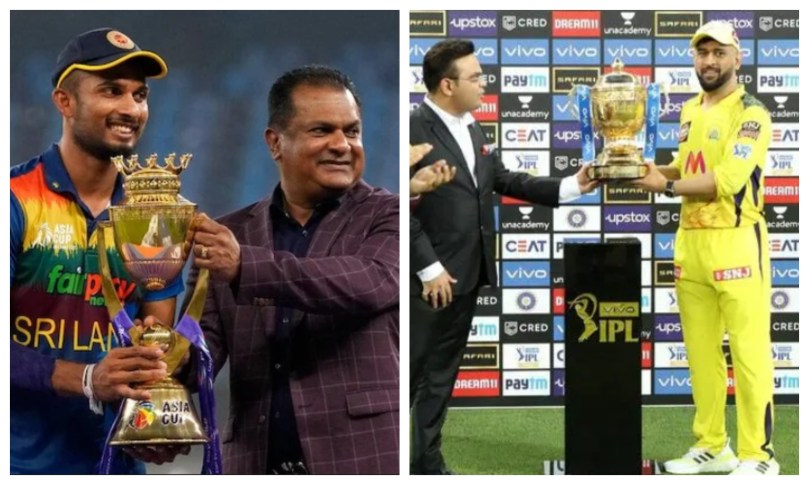 SriLanka Wins Asia CUP – CSK Inspired SriLanka Cricket: Sri Lanka captain Dasun Shanaka has hailed Chennai Super Kings (CSK) contribution as they won the ASIA CUP 2022. Shanka revealed that, his team took inspiration from CSK’s IPL 2021 triumph as they lost the toss.  He said, CSK’s win in the same circumstances in IPL 2021 inspired them and they too could win despite losing the toss at a venue that has proved to be a nightmare for teams defending totals: Follow IPL 2023 LIVE Updates & ASIA CUP 2022 Highlights with InsideSport.IN

Dasun Shanaka said he had kept in mind what Chennai Super Kings did in the Indian Premier League 2021 final after losing the toss and batting first against Kolkata Knight Riders at the same venue.

CSK had successfully defended 192-run total to win the final against KKR by 27 runs but Sri Lanka had only 170 to work with in the Asia Cup final on Sunday against Pakistan.

“ If I go back to IPL 2021, it was Chennai who won the final after batting first. These youngsters know conditions and situations really well. After losing five wickets, Hasaranga-Rajapaksa made a difference. Up front, Chamika and DDS batted really well too,” Shanaka said.

CSK Inspired SriLanka Cricket: Notably, only Hong Kong and Afghanistan had lost while batting second in Dubai in the Asia Cup until Sunday. However, Sri Lanka successfully defended 170 after fine bowling and fielding performances.

Sri Lanka bowled Pakistan out for 147 with Pramod Madushan taking 4 wickets and Wanindu Hasaranga picking up 3 crucial wickets in the middle-overs.

Sri Lanka were reeling at 58 for 5 after a fiery spell of new-ball bowling from Haris Rauf and Naseem Shah. However, Bhanuka Rajapaksa (71 not out off 45) and Wanindu Hasaranga (36 off 21) helped Sri Lanka post a competitive total. Dhananjaya de Silva chipped in with a 21-ball 28 after coming into bat at No. 3.

Shanaka was hugely appreciative of the support from the fans at the Dubai International Stadium. The all-rounder, who inspired Sri Lanka’s stunning comeback after they lost their opener to Afghanistan in a humbling manner, said it was the cheering from the fans that gave them the extra energy in the big final.

Sri Lanka, who were written off after the defeat to Afghanistan, have produced one of the biggest cricketing highs in the country’s recent past.

The Asia Cup crown has returned to Sri Lanka at a time when the island nation is going through one of its worst economic crises.

“I must thank the crowd, they were supporting us massively. And also to the fans at home, hope we made them proud,” he added.

Sri Lanka, who won the Asia Cup crown for the first time since 2014. They are not yet assured of a place in the T20 World Cup Super 12 as they will have to play Round 1 (qualifying round) after having failed to achieve an automatic qualification.