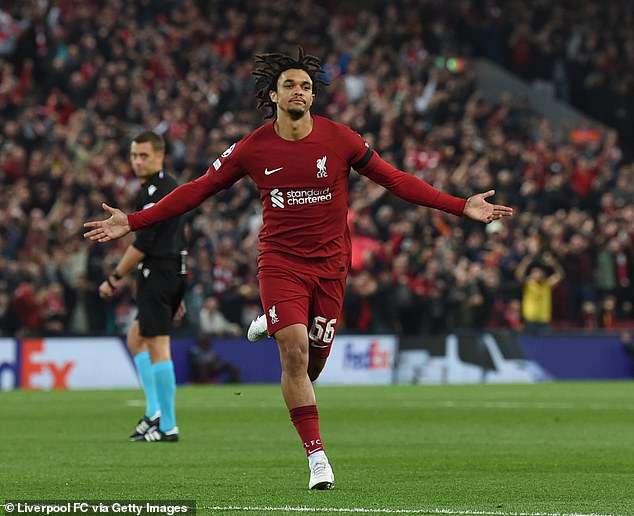 Steve McManaman was full of praise for Trent Alexander-Arnold after the defender put Liverpool in front against Rangers in the Champions League with a fantastic free-kick.

The right-back put Liverpool in the ascendancy in the seventh minute with an effort that went into the top corner.

Commentating on BT Sport, former Liverpool player McManaman said: ‘It’s a spectacular goal. It had to be precise and have enough power to beat a goalkeeper of Allan McGregor’s calibre. Right in the top corner.’

Alexander-Arnold has received much criticism recently for his defending and didn’t play a single minute for England during the recent international break, but he demonstrated that his threat from set-pieces remains intact.

Dion Dublin described Alexander-Arnold’s free-kick as ‘amazing’ and said the 23-year-old will relish the chance to answer his critics. 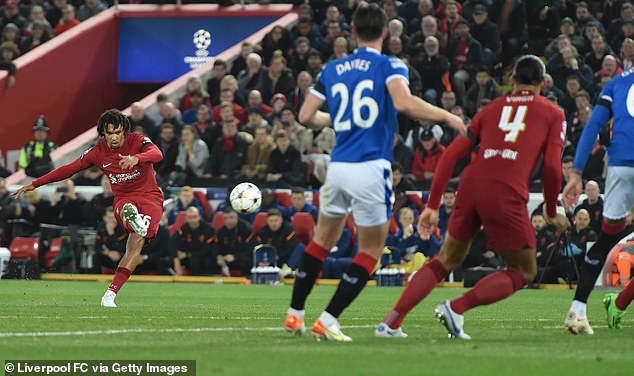 Dublin, speaking on BBC Radio 5 Live, said: ‘You’ll do well to see a better goal from that position. He whips it over the centre of the wall and into the top corner, the keeper has no chance. An amazing free-kick. He went down on his knees, his arms apart as if to say ‘that’s what I can do’.

BT Sport pundit Michael Owen described Alexander-Arnold as having a ‘wand of a right foot’.

Owen said: ‘I don’t think anybody questioned what Alexander-Arnold was like on set-pieces. It was absolutely sublime. He’s got a wand of a right foot.’

He said: ‘A goal would have been top of his wishlist. Some of the passing and some of the movement has been really top draw.’