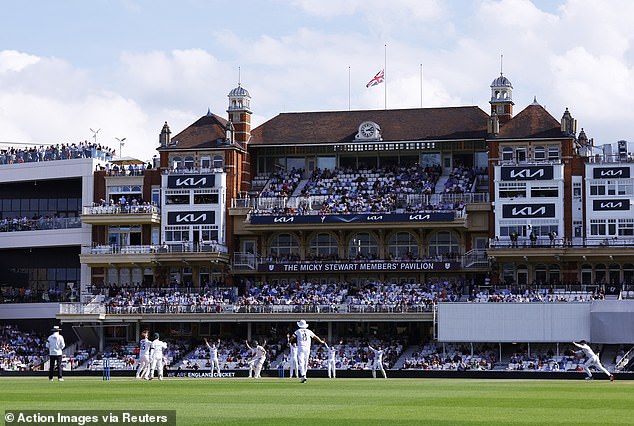 The Oval holds a strong place in a lot of players’ hearts because you end home summers there, and — if you are lucky enough — it’s the place you celebrate Test series wins. And the one over South Africa was special for lots of reasons.

First, we were able to pay our respects following Her Majesty’s death, and the pin-drop silence in a ground full of 25,000 people before play and being a part of singing God Save the King for the first time in a sporting venue will live long in the memories of both myself and all of the players involved.

Fittingly, we then produced a fine Test match performance to secure a win in just over two days.

The Oval paid tribute to Her Majesty, The Queen, before England’s comprehensive test win

It capped what has felt like the most incredible summer for me because without trampling over old ground, I was as close as I’ve ever been to never experiencing that winning feeling again on international cricket field with the way I felt back in March.

I was pretty devastated after being left out of the tour of West Indies and I think what that made me do was allow me to value everything that subsequently came my way.

What has made it so memorable — yes, six wins out of seven is incredible, yes credit must go Brendon McCullum and Ben Stokes for the creation of a different style of cricket — is being part of a team in which every single player can look back and say: ‘I’ve contributed at some stage to a Test match win.’ 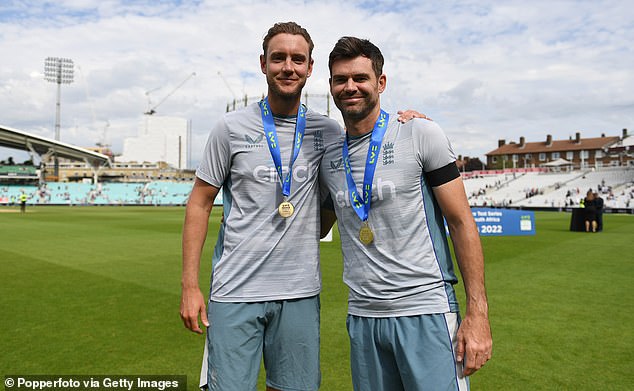 With James Anderson (R), we are coming for the wicket-taking bowling partnership record

On a personal level, it’s probably fair to say I have lightened up a bit, been less structured with my approach, relaxed and had more fun. I’ve really enjoyed that aura Brendon and Stokes have brought to the team.

On the field, I have been part of a bowling group that just thinks about getting 10 wickets as quickly as possible, not worrying about the economy rate at all, and that actually takes some pressure off.

You keep four slips at all times, and if you’re going at six an over, you know that no one in the changing room or on the field is going ‘Oh God, he’s getting whacked.’

We’ve all bought into the game plan. If I bowl and get hit for four or six, I’m fine because I know it’s not fours or sixes that matter, it’s the wickets column and so to take 29 and finish as the leading wicket taker for the team for the summer means I’ve contributed positively.

It was also an honour to go beyond Glenn McGrath’s career Test wicket tally on our final bowling day of the summer. McGrath was a hero of mine, someone I imitated in the garden, and the reason I wanted to become a bowler.

It’s incredible to be up there in his sort of company and to be in a one-two with my great mate Jimmy Anderson as the most prolific seamers in Test cricket. It also raised a smile or two that I took the 564th wicket on the fourth anniversary of Jimmy going past Glenn.

During the celebrations, I put on my ‘You Have To Call Me Night Hawk’ T shirt. It’s a line Will Ferrell comes out with in the film Step Brothers. I wore it at Lord’s at the start of the South Africa series and the lads found it funny, so it got another outing. 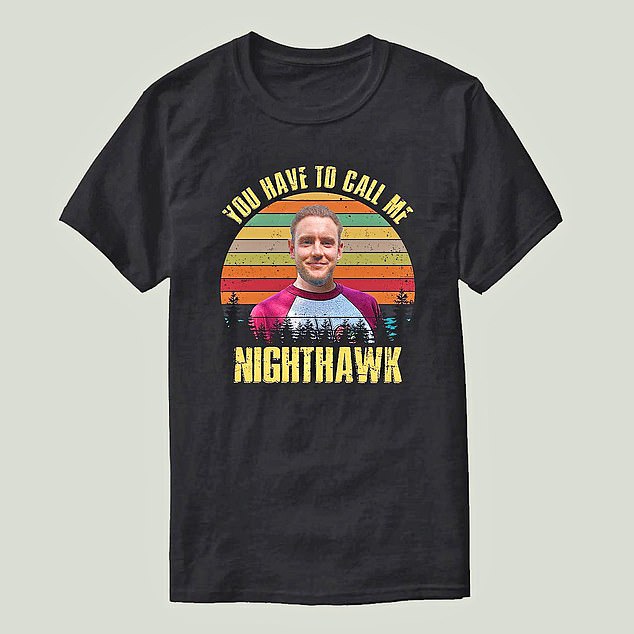 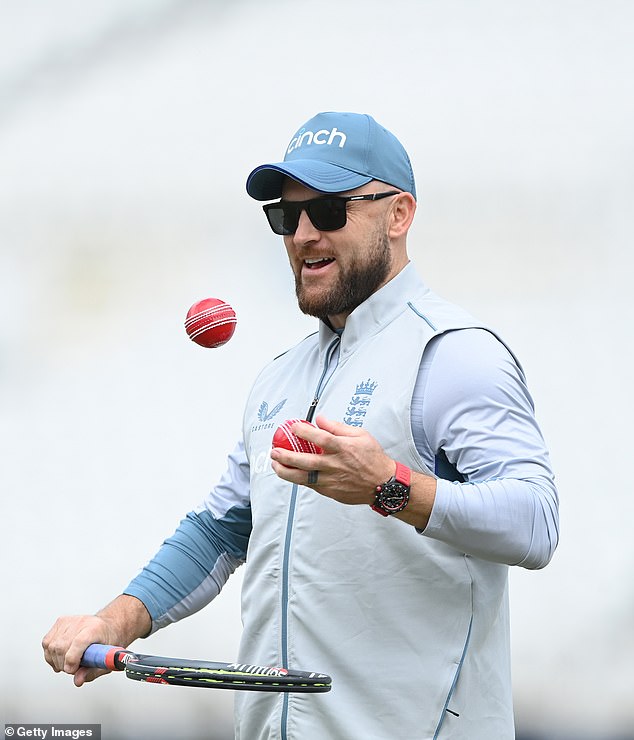 Funnily enough, since July and the first time I was asked to turn the nightwatchman role into something to fit our team’s attacking vision, Baz McCullum hasn’t called me Broady once. Every day he walks into the changing room, he’s like: Morning, Hawk.

It sums up the mood of the England camp right now. Without putting an unprofessional spin on it, I can actually honestly say the past four months has felt exactly like playing for a club side you love, with the camaraderie, friendship, mickey-taking, and nicknames.

One of the things that has developed has been a staple sign-off to every team talk. Jack Leach is very quiet but has a very dry sense of humour and whenever Baz and Stokes have finished speaking, without fail, Baz ends by asking: ‘Anything to add, Leachy?’ The deadpan reply, after a pause, is: ‘Nah, I think you’ve covered it pretty well.’ In my last column, I vowed to ramp up my competitive edge ahead of the Old Trafford Test win. At that stage, I didn’t expect to be bowling first change and the plan for Ollie Robinson to take the new ball was actually hatched a few days later when I was a passenger in Stokes’ car, after playing a round of golf.

He asked me what I would do with Robbo, obviously someone whose a really good new-ball bowler. He was keen to get him into the game because he’d had a long time out, there’d been question marks over his fitness, and there was a bit of pressure on him.

My response was ‘yeah, I think he should take the new ball but it doesn’t mean he has to take the second new ball.’ And that we needed to be flexible because if we had been playing Australia the following week, and it was David Warner walking out to bat, I’d want it.

Things are not set in stone in this team now. It’s about being adjustable and adaptable. You’ve seen Alex Lees dance down the track to the new ball, Ollie Pope successfully move to a new role at No 3, Joe Root reverse ramp for six.

Players have stuck to their strengths in the main but always committed to what the team needs in any particular moment.

As first change, I was asked to lengthen the pressure period on the batters and I actually felt I did that, as in three out of the four innings I took a wicket in either my first over or second over.

I am always someone who has needed new challenges and I’ve always maintained that if I’m not working on something, trying to develop something technically or mentally or physically, my training becomes stale, and I become stale as a competitive sports person. 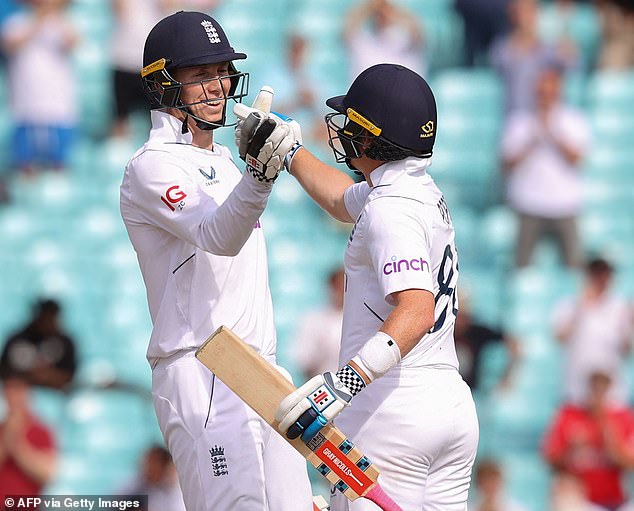 I’m excited about my remaining England career, alongside Zak Crawley, Ollie Pope and others

It has left me excited about the rest of my England career. And that doesn’t mean looking ahead to next year’s Ashes. We’ve made that mistake before.

Baz actually has a saying ‘Let’s play where your feet are,’ and that’s been such a strength of ours all summer. We’ve stayed in the moment. So all I am thinking about is entering the next Test match I play, the fittest I’ve ever been. At 36, that’s quite a big thing to say.

I’m going to be training five, six days a week specifically for fast bowling. So that whenever I’m next selected, I am in great condition.

Normally I do technical work, and I made a tweak at the Oval, twisting my shoulders a little, like Dominic Cork used to, to get my wrist position better on release. It helped me swing the ball. But when the calendar ticks on to October 1, I will plunge into a new fitness regime.

Not long after, selection for the Pakistan Test series will take place and whether I make that tour is yet to be decided.

I will obviously want to be at home deep into November when Mollie and I are expecting our first child, so that will form part of selection discussions. My job is to make sure I am ready whenever I am called upon again and I look forward to that with an enthusiasm that has reached another level these past few weeks. 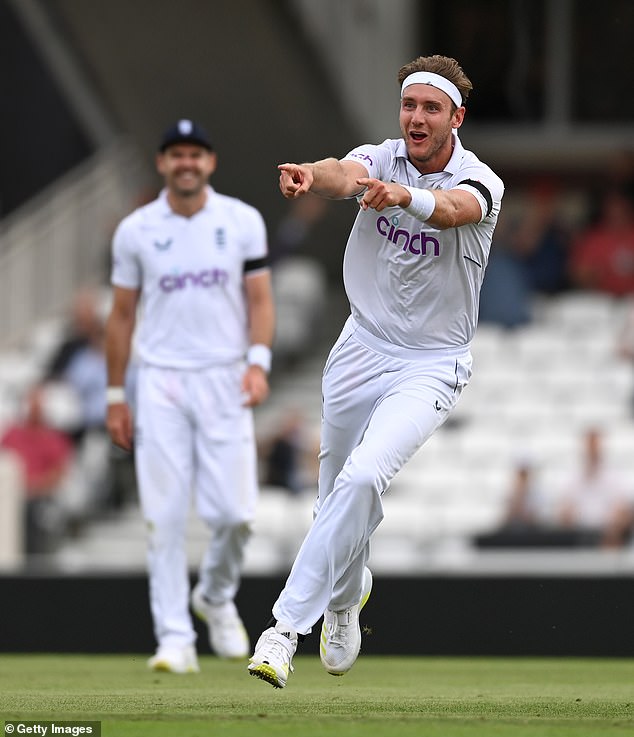