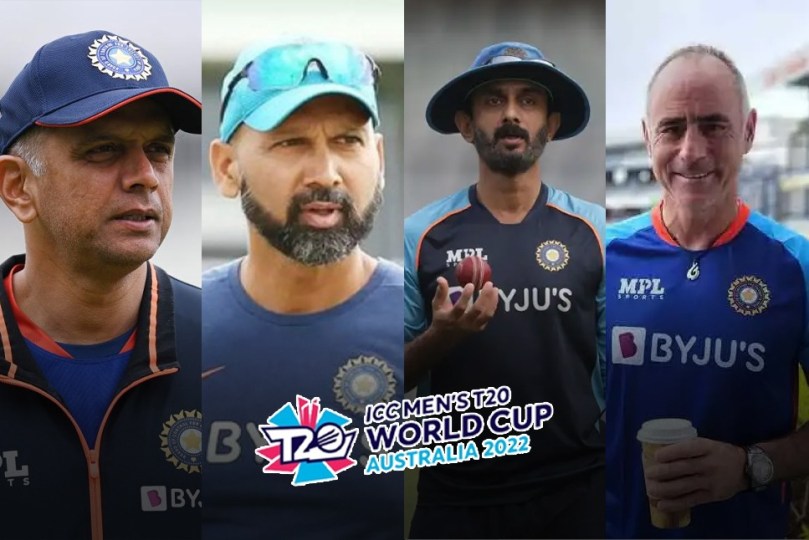 T20 WC India Squad: India’s backroom staff: India are looked upon as strong contenders for the T20 World Cup in Australia, starting October 16. They have big stars, including Virat Kohli, Rohit Sharma, who will need to be on top of their game. But they need the support of head coach Rahul Dravid, batting coach Vikram Rathour and bowling coach Paras Mhambrey. They are pillars of the Indian team management for Australia alongside key players. Follow India T20 World Cup live updates with InsideSport.IN

The Indian team has a huge backroom staff, which comprises of throwdown specialists, team doctor, mental and strength conditioning coach as listed by a report in the Indian Express. Here is a look at the Indian backroom staff of the Indian cricket team for the World Cup 2022.

The game is played by the 11 players on the middle, but before that happens, important team meeting take place. The plans are normally laid by Rahul Dravid along with other coaches in the team and the captain. The biggest problem or the headache Dravid will have is the finalising the Playing XI for different matches. Also, this is the first ICC event under Dravid, and he will be keen to help India get back the title, which they last won in 2007.

“The idea was to get acclimatised with the Australian conditions.” – Rahul Dravid

Keep watching #FollowTheBlues for all the inside news from the #TeamIndia camp as they prepare for the big test. pic.twitter.com/OqJOAe9ZVt

He has important men to assist in different departments of the game. As for batting, it is Vikram Rathour. He will be keeping a close eye on India batters and help them come up with solutions to their problems.

In the bowling department, Mhambrey has his task cut out. The bowlers have come under scrutiny, especially in the death. He must chart out plans and strategy for his bowlers to execute on the day. As for the fielding drills during training and before the game, Dilip shoulders responsibility. He was only part of the Indian team set up after Dravid joined as head coach.

Though video analyst Mohan may not be popular, he holds an important position in the India team. He is always updated on terms of the players weakness and strengths. At times, the videos are also used to rectify mistakes in technique and so on.

As for Jain, he is the head physiotherapist. He will be helpful for players to recover quickly from niggles and so on. Likewise, Parmar also keeps a close tab of players’ injury too. Minz is the team doctor and will be running to the field in case of any emergencies.

Among others, Paddy Upton is the biggest name as he has worked previously with the Indian team as well. He was taken by BCCI only after head coach Dravid wanted him  to be on the team. Having worked with the Indian team in the past, Upton has all the experience and expertise to deal with the current team.

They might not be busy during matchdays mostly, but they are key arms for India batters in Australia. Nuwan Seneviratne has been travelling with the Indian team for the last four years or so. He is a left-handed throwdown specialist from Sri Lanka. Garani is another throwdown specialist for the World Cup.

Others: Rajlaxmi Arora and Moulin Parikh are part of the BCCI Media team as Producer and Media Manager respectively.  Ravindra Doiphode is the security liaison officer