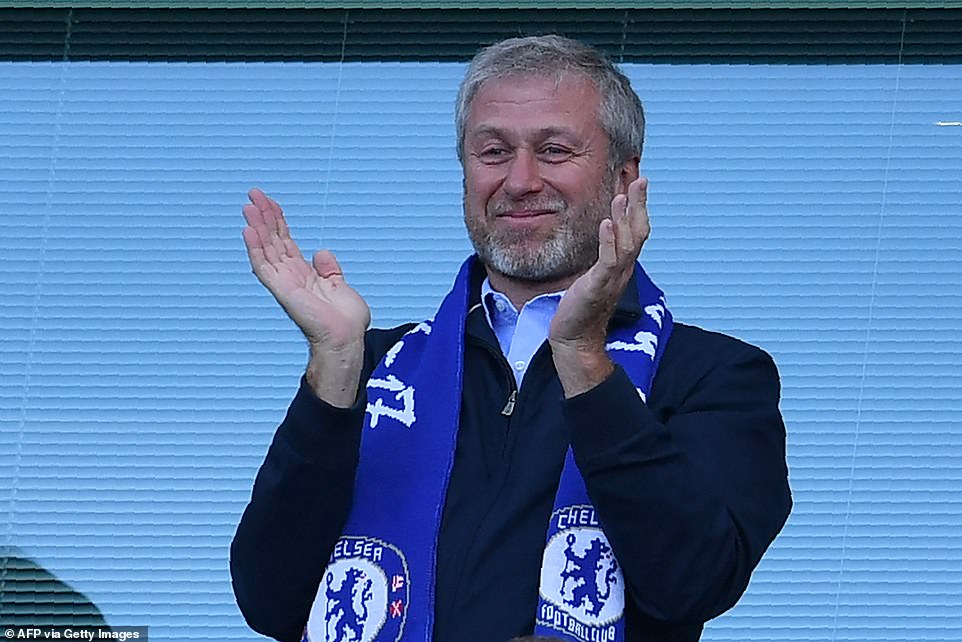 Roman Abramovich faced calls to be stripped of his right to own a football club today after bombshell documents linked him to Vladimir Putin’s regime and ‘public association with corrupt activity and practices’.

The billionaire Chelsea owner has faced renewed focus on his business activities in recent days as Russia prepared and then launched an all-out attack on Ukraine.

He said the document was from 2019, and questioned why no action had yet been taken against the 55-year-old based on its warnings.

As business questions this morning the Rhondda MP and former minister said: ‘I have got hold of a leaked document from 2019 from the Home Office which says in relation to Mr Abramovich – ”As part of HMG’s Russia strategy aimed at targeting illicit finance and malign activity, Abramovich remains of interest to HMG due to his links to the Russian state and his public association with corrupt activity and practices.

”An example of this is Abramovich admitting in court proceedings that he paid for political influence.

”Therefore HMG is focused on ensuring that individuals linked to to illicit finance and malign activity are unable to base themselves in the UK and will use the relevant tools at its disposal, including immigration powers to prevent this”.

‘That is nearly three years ago and yet remarkably little has been done in relation. Surely Mr Abramovich should no longer be able to own a football club in this country? Surely we should be looking at seizing some of his assets including his £152million home? And making sure that other people who have had Tier 1 Visas like this are not engaged in malign activity?’

In 2011 the High Court heard that Mr Abramovich had used the well-connected oligarch Boris Berezovsky as his ‘political godfather’ to help him conduct business deals in a country where police were ‘corrupt’ and courts ‘open to manipulation,

The court heard the Chelsea owner believed it was his ‘moral obligation’ to hand Mr Berezovsky £1.3billion to fund his lavish lifestyle.

The Chelsea owner gave his former friend the cash because he felt it was part of the ‘code of honour’ that had replaced the rule of law in Russia after the collapse of communism, it was alleged.

Today’s developments came as reports suggested Mr Abramovich has effectively been barred from living in Britain ever again.

The billionaire Chelsea owner has faced renewed focus on his business activities in recent days as Russia prepared and then launched an all-out attack on Ukraine. 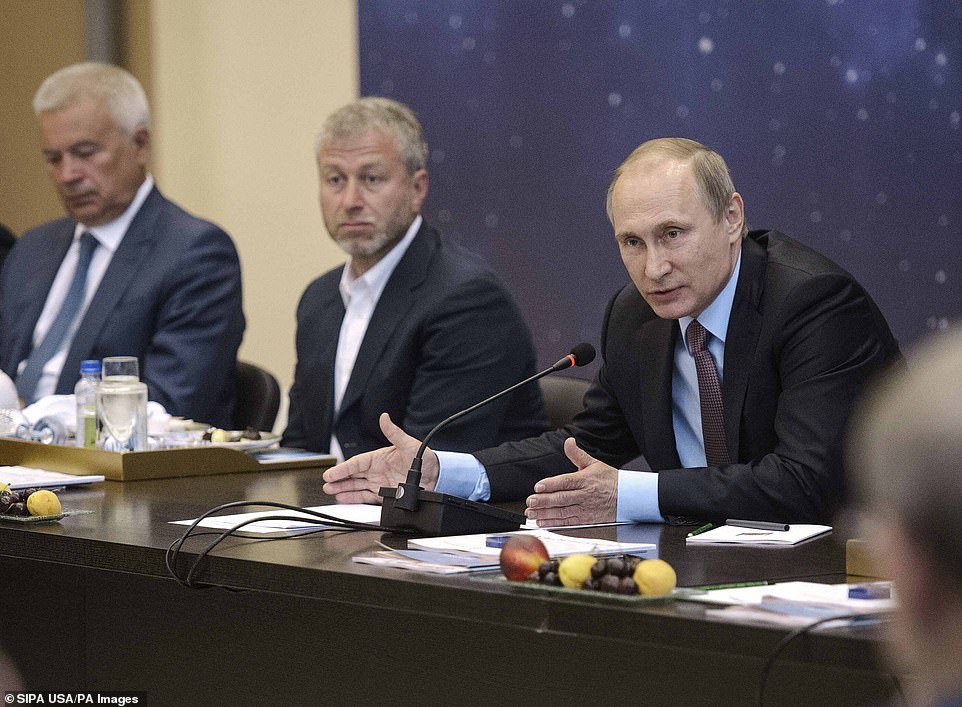 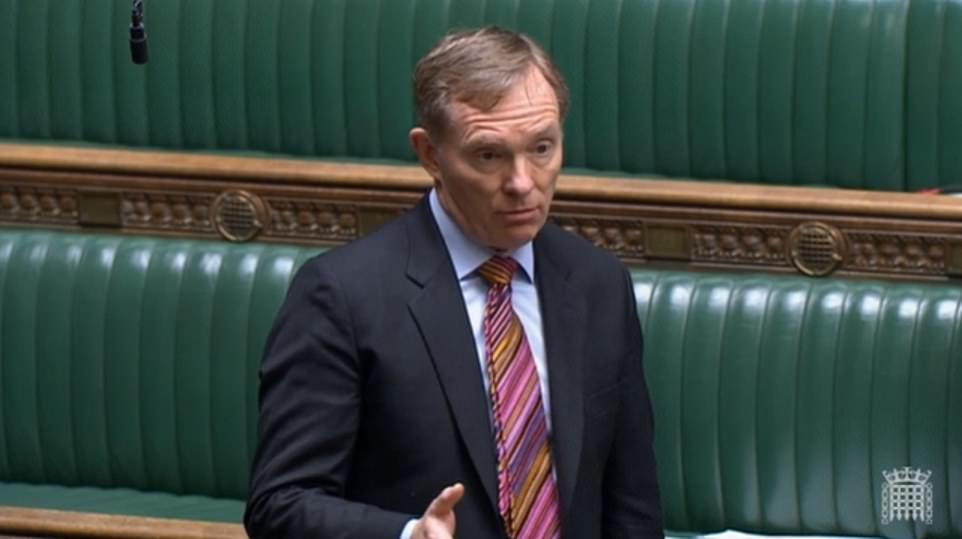 Labour’s Chris Bryant told the Commons: ‘Surely Mr Abramovich should no longer be able to own a football club in this country?’

The billionaire has not been seen at his Premier League football club’s south-west London home, Stamford Bridge, for months.

According to The Sun, senior security sources now say it is unlikely that the 55-year-old will ever be allowed to live in Britain again.

Downing Street would not be drawn on the claims about Roman Abramovich made in the Commons.

The Prime Minister’s official spokesman said: ‘I couldn’t comment on individuals in that way or on leaked documents of that type.’

He added that Mr Johnson ‘will set out a significant package of sanctions later today’.

Replying to Mr Bryant, Commons Leader Mark Spencer replied: ‘He will know under the sanctions passed in the House this week there is the opportunity for the Government to take very strong action against high-profile Russian individuals who are of concern.

‘He will be aware that the Home Secretary will be at this despatch box next Monday for Home Office questions and I am sure he will be able to challenge her directly.’

Immigration officials are reportedly under instructions to make it impossible for Mr Abramovich – who owns a £125million mansion near Kensington Palace – to base himself in the UK. 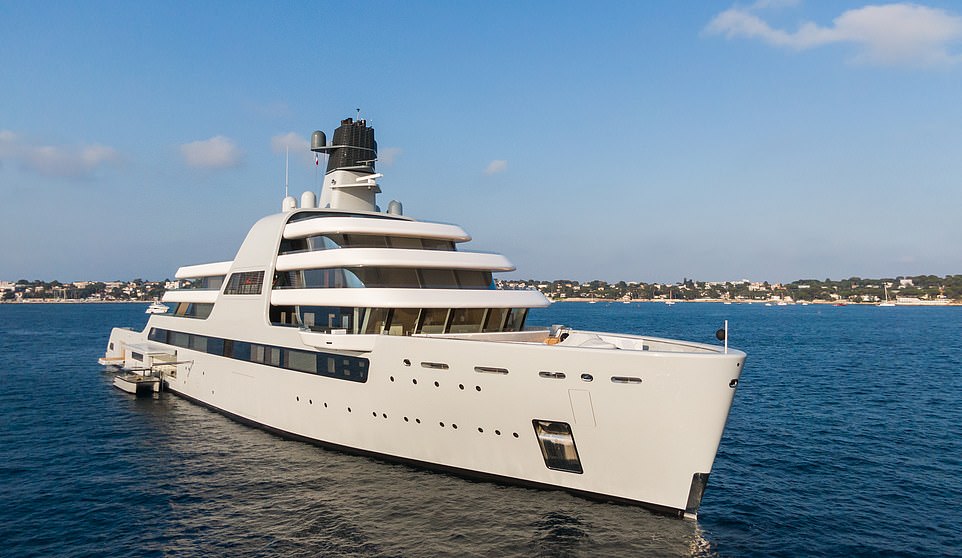 As well as his huge property portfolio, he also owns a series of superyachts, including the £450million Solaris (pictured), which has a missile detection system 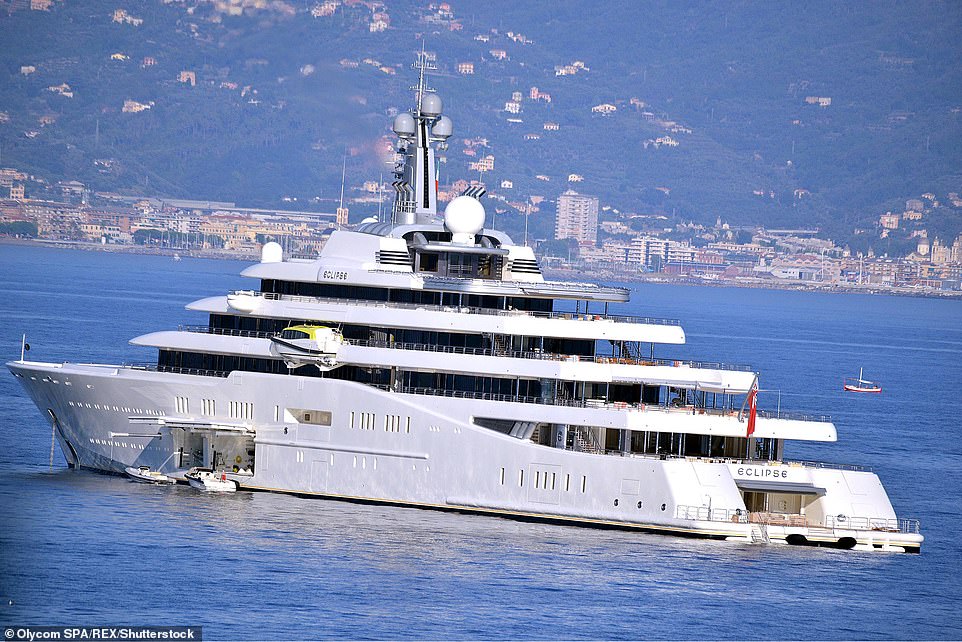 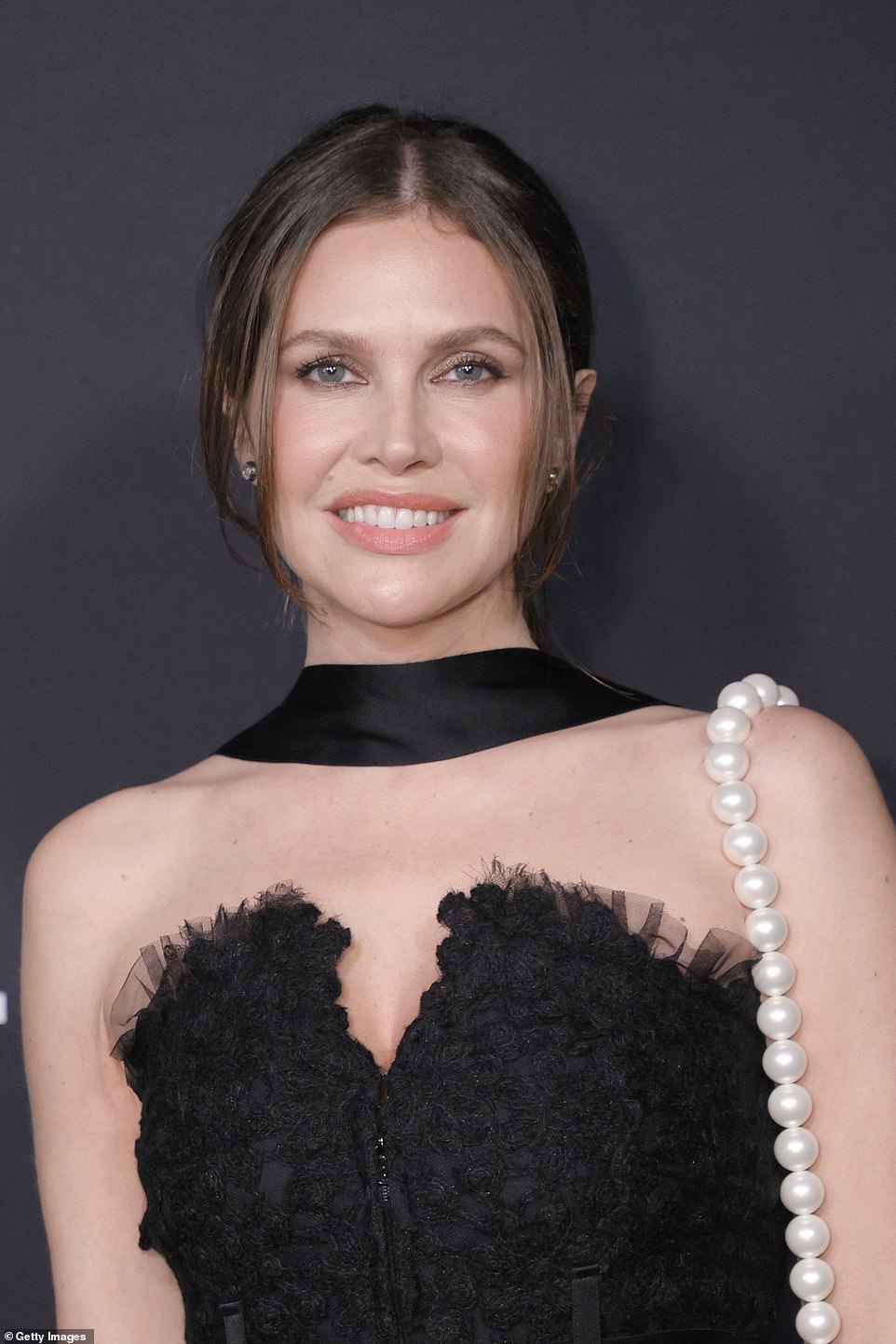 Mr Abramovich has been married three times, most recently to magazine editor Dasha Zhukova between 2008 and 2017, and has seven children. 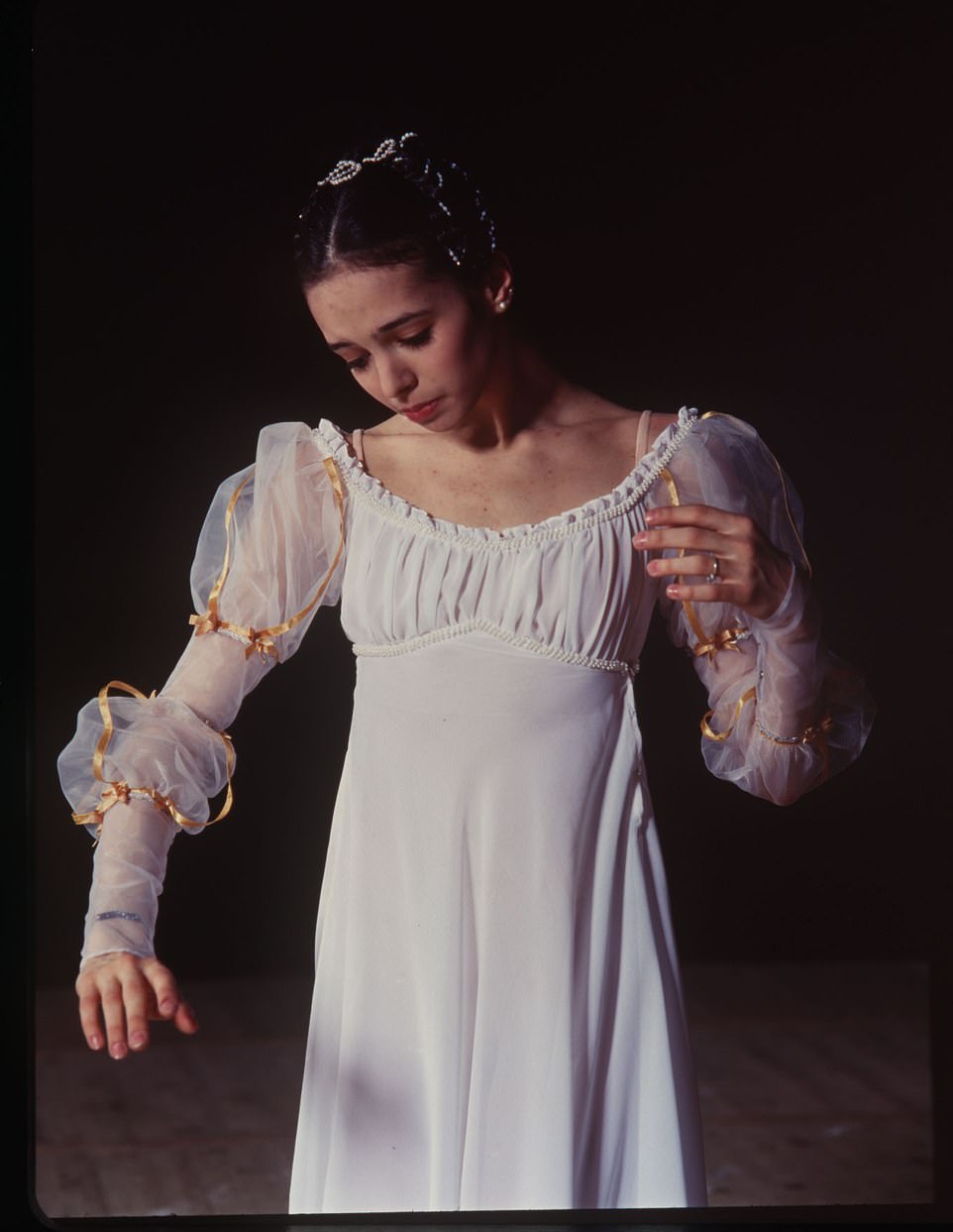 His case is said to be being handled by the Home Office’s ‘Special Cases Unit’.

It comes after Mr Abramovich was named by MPs on Tuesday as being one of 35 oligarchs identified by  Russian opposition leader Alexei Navalny as one of the ‘key enablers’ of the ‘kleptocracy’ run by the country’s president Vladimir Putin.

He vehemently denies he is close to the Kremlin or has done anything that would merit sanctions being imposed against him – as Britain looked to impose sanctions on Russia amid rising tensions with Ukraine.

In 2018 Mr Abramovich became an Israeli citizen, allowing him to enter for Britain for up to six months. He used his Israeli passport last October to make a short trip to London.

However, a senior source told The Sun that any attempt by the oligarch to apply for a permanent visa would ‘almost certainly be rejected’.

Mr Abramovich has an estimated wealth of £8.4billion.

As well as his huge property portfolio, he also owns a series of superyachts, including the £450million Solaris, which has a missile detection system.

Mr Abramovich has never held UK citizenship and made his money selling assets purchased from the state when the Soviet Union broke up. 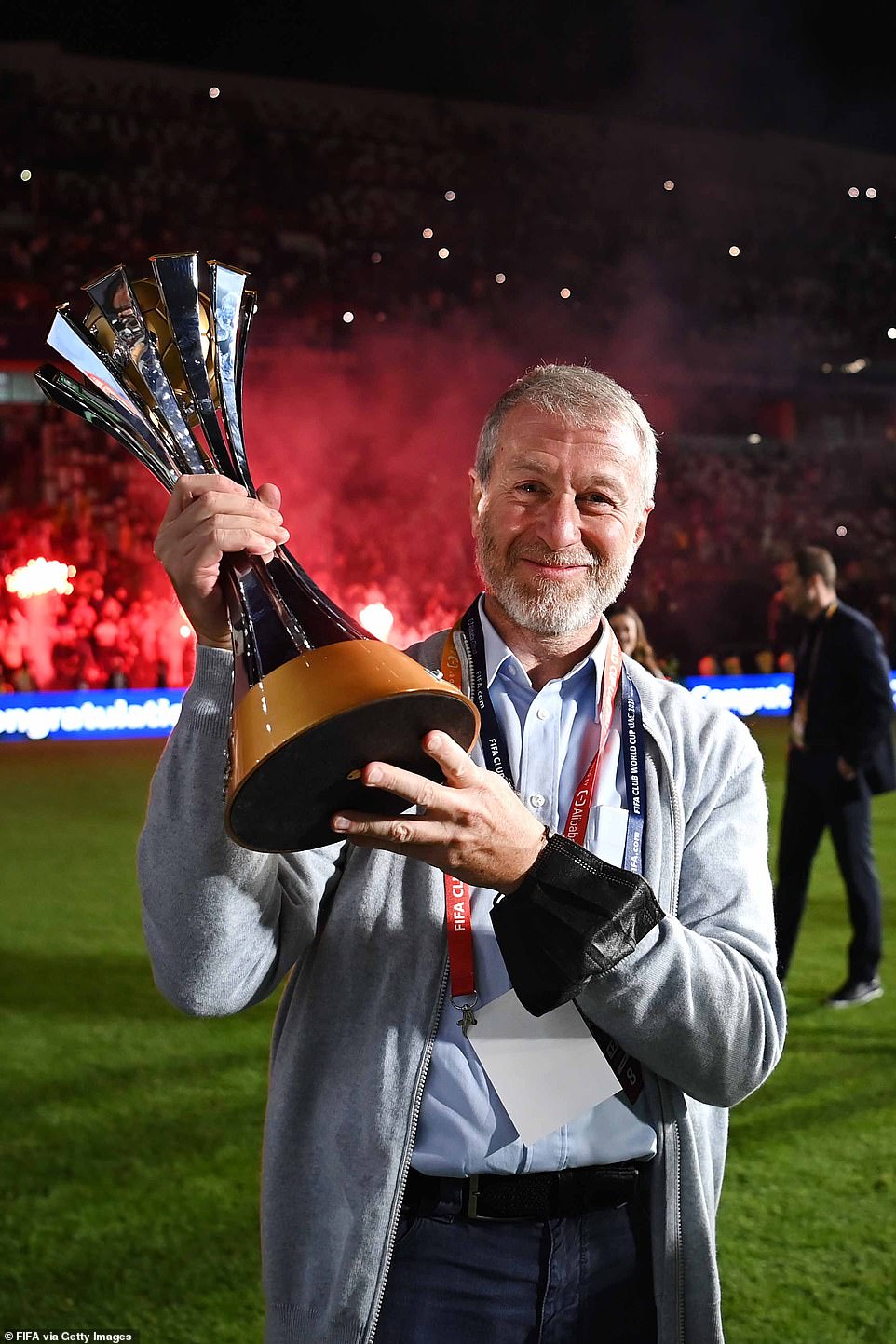 The billionaire is said to have not been seen at his Premier League football club’s south-west London home, Stamford Bridge, for months. Above: The oligarch celebrates with the Club World Cup that was won by his side in Abu Dhabi earlier this month

He arrived at Chelsea in 2003 and transformed the team from outside challengers to a Premier League giant with the help of Jose Mourinho.

The bulk of Abramovich’s UK wealth is to be found in Evraz, a steel and mining giant listed on the London stock market.

In the Commons on Tuesday, Liberal Democrat MP Layla Moran read out a list that featured Mr Abramovich’s name alongside other oligarchs including Arsenal investor Alisher Usmanov.

Foreign Secretary Liz Truss refused to say whether or not Mr Abramovich would be targeted with sanctions, but suggested that others would be.

‘We have a long list of those complicit in the actions of the Russian leadership,’ she said.

‘Should Russia refuse to pull back its troops, we can keep turning up the heat, targeting more banks, elites and companies of significance.

‘This is about inflicting pain on Putin and degrading the Russian economic system over time, targeting people that are close to Putin. What we have to do is make it as painful as possible.’

Mr Johnson yesterday held talks with senior City figures about ways to tighten the screws on Russian businesses and individuals with links to the Kremlin.

The PM told the Commons that the Government was ‘bringing forward’ the next wave of sanctions which would ‘stop all Russian banks, all oligarchs, all Russian individuals raising money on London markets’. 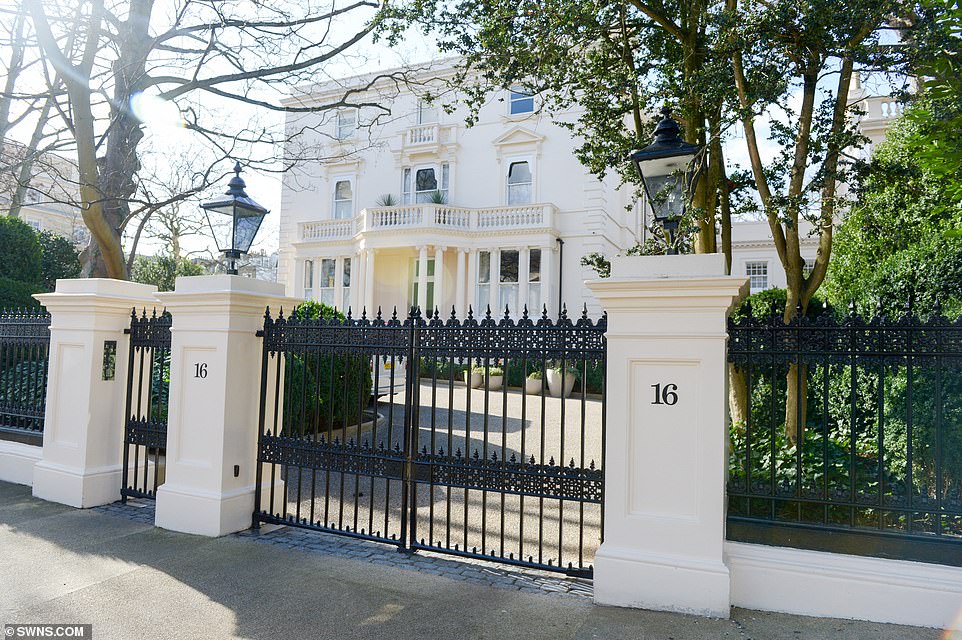 The Russian billionaire, 54, reportedly boasts a British property empire that includes a 15-bedroom mansion in Kensington Palace Gardens (pictured) that is believed to be now worth £125 million

Ministers are also drawing up plans to stop the Kremlin borrowing on the UK financial markets.

Tory MP Bob Seely said the ‘tide of dirty money’ entering the UK from Russia was ‘damaging’ the country.

Labour leader Sir Keir Starmer said it was time to end the ‘era of oligarch impunity’ and ensure ‘this country will no longer be homes for their loot’.

Mr Johnson acknowledged the impatience of many to move faster, but said it was vital that it was done on a co-ordinated international basis.

‘On all these measures it is very important to remember that they are more effective when all financial centres move forward together, and that is what the UK has been organising,’ he said.

‘We can keep turning up the heat.’