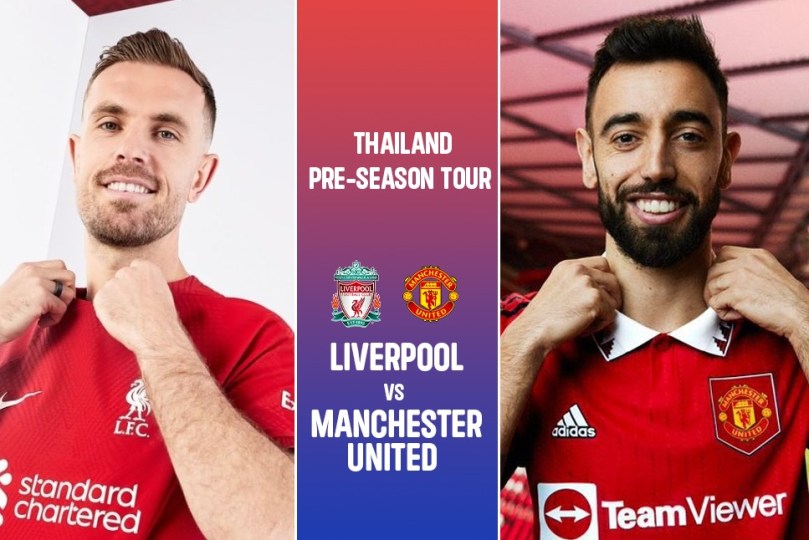 Liverpool vs Man United LIVE – LIV vs MUN live updates: Man United have embarked on their pre-season tour and Erik ten Hag will take charge of his first match on Tuesday vs Liverpool. Liverpool are set to fly to Thailand on Saturday evening as Jurgen Klopp hopes for another season full of positives with new addition signings eager to impress Jurgen Klopp. Follow Latest Football News LIVE with InsideSport.IN

Liverpool vs Man United LIVE: Team News to be announced

A 31-man United squad flew out from Manchester Airport bound for Thailand on Friday afternoon for the first leg of their pre-season tour where they will take on Liverpool. The squad that has been taken on tour is even weaker, however, than the one that concluded United’s worst-ever Premier League campaign with a defeat to Crystal Palace in May.

The rebuild that was heralded this summer has yet to come to pass, with left-back Tyrell Malacia the only signing so far, while Paul Pogba, Edinson Cavani, Jesse Lingard, Nemanja Matic and Juan Mata have all departed. Returning loanees Donny van de Beek, Anthony Martial and James Garner are back in the fold, but it isn’t the revolution many fans have wanted.

Ten Hag has been dealt a further blow to his travelling party by the absence of Cristiano Ronaldo, who hasn’t made the trip due to a family issue. Whether the Dutchman ever gets to manage Ronaldo in a game remains to be seen after the five-time Ballon d’Or winner made it clear he wants to leave Old Trafford.

Liverpool however has signed players such as the promising young Darwin Nunez and Fabio Carvalho who most likely debut in the upcoming Winter Festival of football which gives Liverpool a promising future. Fabinho, james Milner, Joel Matip, Roberto Firmino have all been training with the club.

Although, Mohamed Salah is yet to return for the Reds as he continues his off season break. Goalkeeper Alisson and new signing Darwin Nunez were not pictured in training but once the official squad is announced it will be clear who make the trip to Thailand.

Liverpool vs Man United LIVE: When, where and how to watch Pre-Season Live Streaming?

When will Liverpool vs Man United be played? – Date

What time will Liverpool vs Man United be played? Time
LIV vs MUN match will kick-off at 6:30 PM IST

Where will Liverpool vs Man United be played? – Venue
LIV vs MUN will be played at the Rajamangala Stadium in Bangkok

For fans in India the match will be not be live telecasted, although live streaming is available on Liverpool official app in LFCTV or LFCTV GO or also available on Manchester United’s Official App MUTV. Fans can follow the action and match buzz through the team’s social media accounts.